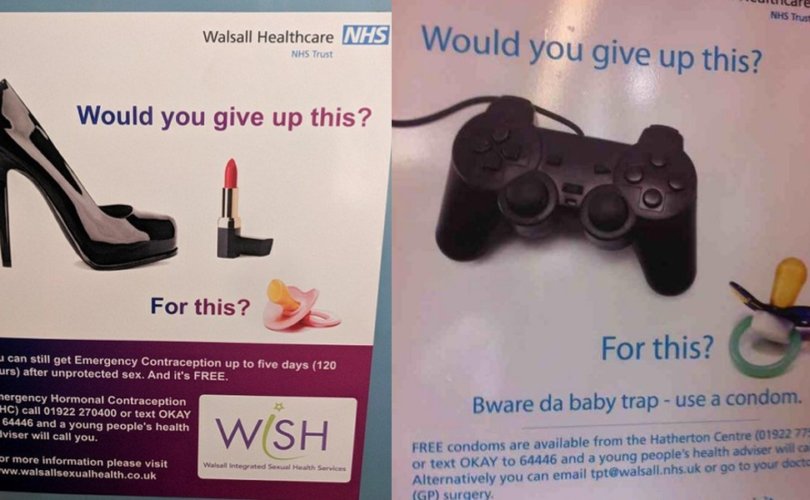 It's unknown if the above NHS ads from September will also face the crackdown.Twitter

UNITED KINGDOM, September 14, 2018 (LifeSiteNews) – A new series of bus ads from the British National Health Service (NHS) proposes so-called “emergency contraception” as a way to avoid parenthood, and by extension sacrificing nights out on the town or in playing video games.

The two ads ask, “Would you give up this?” followed by a picture of either a video game controller or a roll of lipstick and pair of high heels; then “For this?” followed by a baby pacifier. The controller ad advertises the availability of “FREE condoms,” while the makeup ad says, “You can still get Emergency Contraception up to five days (120 hours) after unprotected sex. And it’s FREE.”

they want a monopoly on infantilizing men and women

fight back. have kids. pic.twitter.com/oa1VJjnXku

It refers viewers to the Walsall Integrated Sexual Health (WiSH) website, which admits that every contraception method it offers can function by preventing implantation as well as by preventing sperm from reaching an egg. Despite efforts to frame contraception as an alternative to abortion (largely by redefining “conception” to denote implantation rather than fertilization), preventing an already-formed embryo from implanting also kills a living human.

“Women have been fabulous, multi-tasking phenomenon for generations[,] making ads like these both misogynist and paternalistic in the worst sense,” Kristi Hamrick, spokesperson for Students for Life of America and a working mother of four, told LifeSiteNews. “The notion that strong women can’t function and thrive in more than one arena without abortion is a sales pitch, not a reality. The Pro-Life Generation rejects the false civil war of career versus family that the abortion industry tries to push everyday.”

Aside from NHS’s promotion of abortion at taxpayer expense and endorsement of killing babies for reasons as trivial as recreation, some commuters have taken offense at the ads’ perceived sexism.

“I was gobsmacked when I saw the ad, I had to look at it again to make sure I'd read it correctly,” Kristie Jones told the Daily Mail. She found the “irresponsible” imagery “sexist because it doesn't understand women, it implies if you are a mother you have to give up certain things. My sister has a small child so I'm fully aware of the sacrifices that mums do need to make when they have a baby.”

In a post confirming the authenticity of both ads, Walsall Healthcare NHS Trust’s Nicola Wenlock, the Divisional Director of Midwifery, Gynaecology and Sexual Health, apologized “if this particular advertisement has raised a concern,” but insisted it “has played an important role in tackling teenage pregnancy and poor sexual health in our local area which has been reducing steadily year on year.”

The statement explained that the ads were “informed by feedback from young people.” Despite the fact that the two posters match sex-specific contraception methods and colors with a stereotypically male hobby and women’s shoes and lipstick, the Trust claims the “posters do not refer to gender,” and the imagery was simply chosen based on what “teenagers have told us […] is important to them.”

The post added that the ads were for designed a summer campaign that has already concluded, but teens will continue to “help to inform future campaigns.”

Twitter users in the UK and elsewhere excoriated the ad as “sexist” and “crass beyond belief.” Others noted that being a mother does not prevent one from wearing lipstick.

This NHS ad for the morning-after pill is crass beyond belief. pic.twitter.com/5cyy0YGzlB

Imagine what the NHS must've thought when they found out Serena Williams was pregnant when she won the Australian Open! https://t.co/e2yqc9ntdK

I’m never surprised when businesses use overtly sexist ads, but I am shocked when it’s the NHS. Using our taxes. pic.twitter.com/1JZ9ZeTgS0