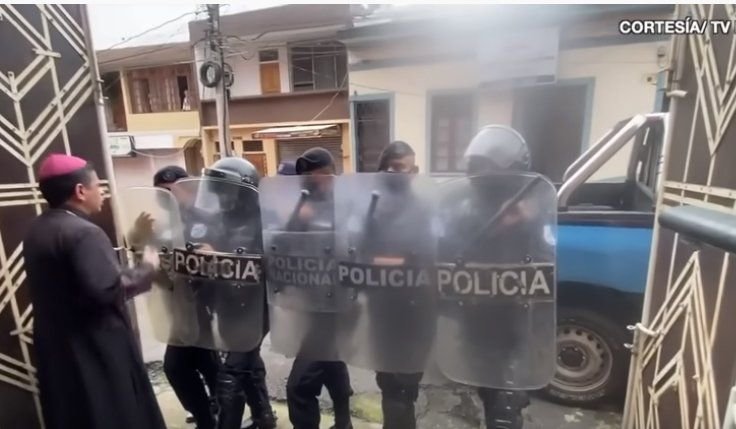 MANAGUA, Nicaragua (LifeSiteNews) – Nicaraguan Bishop Ronaldo Alvarez and his associates have been placed under arrest as part of an investigation that alleges the bishop incited “violent groups” in the country.

Earlier this month, seven Catholic radio stations under the authority of Bishop Alvarez had been forcibly shut down by the telecom authorities under dubious circumstances.

After the stations were squashed, the bishop had been confined to his home and the national police released a statement on August 5 alleging that “ … the Diocese of Matagalpa, headed by Bishop Rolando José Álvarez Lagos, is using media and social networks to organize violent groups, inciting them to execute acts of hatred against the population (…) with the purpose of destabilizing the State of Nicaragua and attacking the constitutional authorities.”

“The National Police, as the competent authority to guarantee peace and citizen security, have established protection measures for the population so that these events do not happen again. Likewise, it has initiated an investigation process, with the purpose of determining the criminal responsibility of the persons involved in the commission of these criminal acts, of which the Public Prosecutor’s Office and the Judiciary have been informed,” the statement continued.

As of August 20, the police intensified their confinement of the bishop and the five priests and two laymen who were with him and have transferred the bishop’s associates to a prison in the nation’s capital. Alvarez has been place under house-arrest in a Managua residence.

After the 2018 election in Nicaragua, Bishop Alvarez called for free and fair elections that would be monitored by international organizations.

Initially, the Ortega government considered mediation by the Church, but then did an about-face and began to expel his opponents from the pollical scene as well as the Apostolic Nuncio out of the country.

In the wake of the persecution of Bishop Alvarez, the UN has decried “attacks on democracy and the Church in Nicaragua.”

UN Secretary General Antonio Guterres expressed his grave concern over what he termed the serious obstruction of democratic and civil life in Nicaragua and recent actions taken by the government against the Church and electoral processes.

The action has also been condemned by the Secretary of the Organization of American States (OAS) Luis Almagro, who lamented the “repressive forces of the Ortega-Murillo regime.”

Responding to the news of the events in Nicaragua, Pope Francis did not condemn the detentions specifically, but instead expressed “conviction and … hope that through means of open and sincere dialogue, one can still find the bases for respectful and peaceful co-existence.”