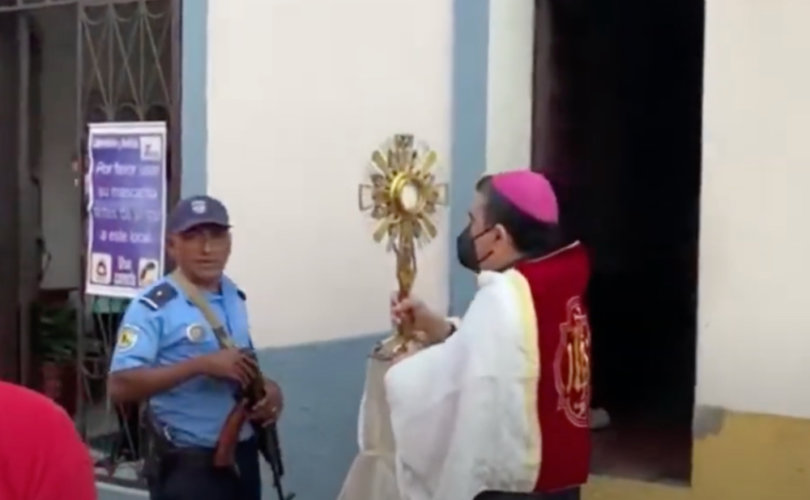 Bishop Rolando Álvarez is accosted by armed police as he processes with the Eucharist outside his church.YouTube screenshot

SEBACO, Nicaragua (LifeSiteNews) – The authoritarian Ortega regime in Nicaragua has forcefully closed down seven Catholic radio stations which were under the guidance of Bishop of Matagalpa, Rolando Alvarez, who has been vocally critical of the government.

The order came from the government on August 1.

JUST IN: Seven Catholic radio stations linked to a Bishop Rolando Alvarez who has been critical of Daniel Ortega, the president of Nicaragua, were shut down by government order. #Nicaragua pic.twitter.com/VNFwQETRLQ

The Nicaraguan telecommunications agency stated that the stations, did not meet technological requirements mandated for use of the Nicaraguan airwaves.

Bishop Alvarez called foul on the directive from the government. “All our radios have been closed,” he wrote on Twitter. “But the Word of God, they will not silence it.”

He later preached about the development when it was ordered that the stations be shut down. Alvarez stated that the radio stations had operated with proper licenses for years, and that he had done nothing wrong. “I speak clearly and plainly, like any Nica,” he said during a homily.

Employees of Nicaragua’s telecom authority, TELCOR, initially brought a request from the government that any radio activity taking place in Divine Mercy Parish, Sebaco, be shut down immediately. The request was refused.

After the directive from TELCOR was refused, police were sent to the parish to raid the church and enforce the order. The event was streamed live on Facebook.

Sandinista police with weapons drawn and wearing military fatigues can be seen taking over the property amidst a presence of Catholic parishioners resisting.

For his resistance, Alvarez has been kept under detention and his chancery office and residence have been raided.

On Thursday, he went into the streets with the Blessed Sacrament and blessed the police.

“I hope they [the police] respect my life and respect my integrity,” he said to the police.

In May, Bishop Alvarez charged that the police harassed him by surveilling him day and night. Alvarez said that he was followed by the police when he went to visit his niece.

“[The police] entered my circle of family privacy, they came to my private, family, paternal, maternal home, putting the safety of my family at risk” he said.

The shut-down of Catholic radio stations follows closely from the expelling of 18 Missionaries of Charity from the country in July. On July 6, the religious sisters of Mother Teresa’s order were kicked out because of sweeping legal changes that resulted in the dissolution of a number of NGOs in the country.

Attorney Martha Patricia Molina Montenegro, a member of the Pro Transparency and Anticorruption Observatory, told ACI Prensa that the Ortega “dictatorship has a frontal war against the Catholic Church of Nicaragua… its objective is to completely eliminate all those institutions related to the Church.”