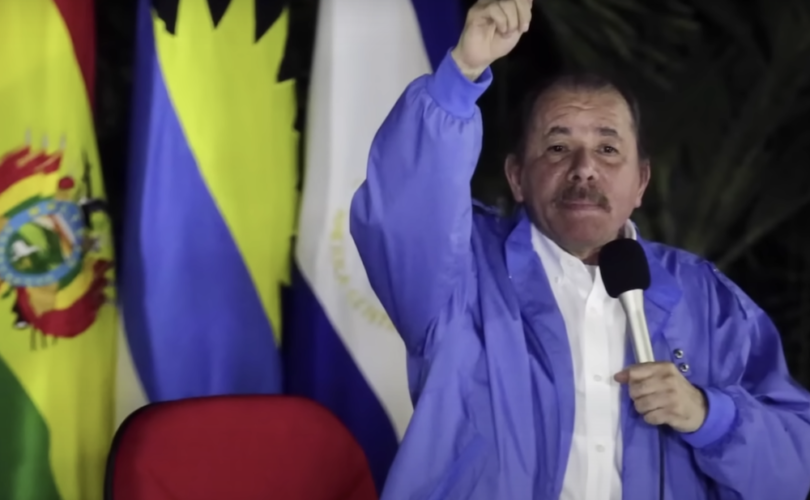 NICARAGUA (LifeSiteNews) – President Daniel Ortega, dictator of Nicaragua, attacked the Catholic Church in a recent speech in the nation’s capital, calling the Church “the perfect dictatorship.”

The remarks were made at a public event on September 28, marking the 43rd anniversary of the founding of the National Police. In a tirade against Catholicism, Ortega lashed out seemingly in response to accusations that his regime is not democratic.

Deriding the pope as a “holy tyrant,” the communist dictator retorted rhetorically, “With what authority do you speak to me about democracy? How many votes did the bishop have from the population to be appointed bishop?”

— Article continues below Petition —
Demand that the Archdiocese of Indianapolis let Kim Zember speak!
Show Petition Text
4968 have signed the petition.
Let's get to 5000!
Thank you for signing this petition!
Add your signature:
Show Petition Text

Ironically, the papacy is one of the few positions in the Church which does involve election. Ortega’s comments would seem to betray ignorance of what a papal conclave is. Abbots and superior generals are also usually elected to their office by their religious community or congregation.

More fundamentally, however, the dictator’s speech seems to reveal the personal sting he feels at the accusation that his government is anything but democratic and the threat to his totalitarian regime that the Catholic Church poses, with its longstanding insistence on a social and political justice that acknowledges God and the rights of the Church.

Apparently, Ortega has taken to insulting Catholic bishops on previous occasions as well. In September 2021, he called them “terrorists,” and “demons in cassocks,” who wear “satanic cassocks.”

On September 15, 2022, the European Parliament denounced Ortega’s persecution of the Catholic Church, in particular, the recent arrest of the bishop of Matagalpa, Rolando Álvarez. The Parliament called for the “immediate and unconditional release of all those arbitrarily detained, including Bishop Álvarez and those detained alongside him, and for all legal proceedings against them to be annulled […].”

As LifeSiteNews reported at the time, the resolution of the European Parliament also drew attention to several other acts of repression against the Church by Ortega’s regime, including “the expulsion of the Apostolic Nuncio to Nicaragua, Monsignor Waldemar Stanisław Sommertag in March 2022, as well as many Missionaries of Charity Association of the Order of St Teresa of Calcutta. The authorities also banned religious processions in August of 2022, which was also condemned in the document.”

The United Nations also raised its voice recently criticizing Ortega’s persecution of the Church. However, while international non-Catholic political bodies such as the E.U. and the U.N. have denounced the persecution of the Catholic Church in Nicaragua, Pope Francis has yet to strongly condemn the crimes of Nicaragua’s communist dictator, calling instead for “dialogue.”