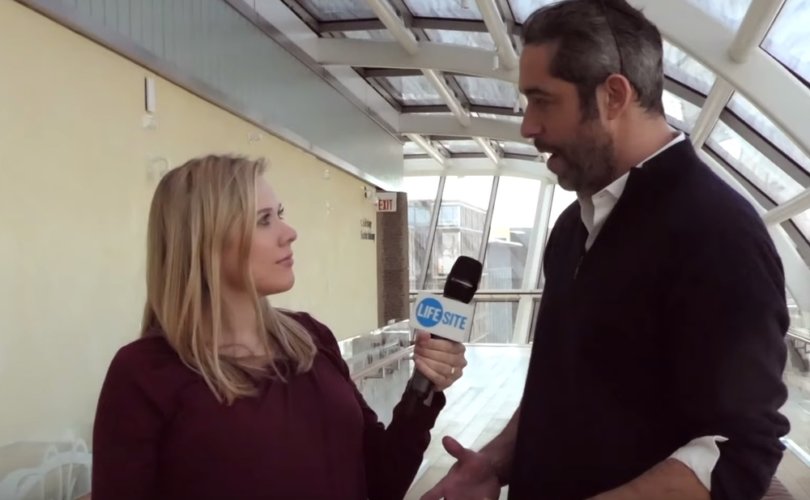 January 30, 2019 (LifeSiteNews) – The best way to combat media bias about the upcoming Roe v. Wade film is for people to go and see it for themselves, director, writer, and star Nick Loeb told LifeSiteNews in a video interview.

Loeb said he was inspired to make this film about the 1973 court case that imposed abortion on demand across the United States because “I cared about telling the truth of this story and this movement.”

He called it a “JFK, Oliver Stone-esque type story.”

Many people don’t know how Roe v. Wade came to be or how Norma McCorvey, “Jane Roe” in the case, was manipulated by the abortion lobby into being the plaintiff in the Supreme Court decision that opened the door for around 60 million human beings to be aborted.

“This really was not a person looking to go to court,” said Loeb.

McCorvey later became a pro-life activist and dedicated herself to trying to overturn the case bearing her pseudonym. She never ended up aborting her baby who was at the center of the case.

The Roe v. Wade movie shows how behind the case “was a group of people looking to find someone to manufacture a case,” explained Loeb. “And so this whole thing was sort of constructed (to legalize abortion). … What’s amazing is this group was able to do this in the courts when it should have been done in the legislature.”

Loeb plays Dr. Bernard Nathanson, an abortionist and founder of NARAL who also later converted to being pro-life. He said the role was “very, very difficult” because Nathanson “comes through this huge arc of starting out fighting for women’s rights, fighting for abortion, and then realizing he’s killing babies – and while he’s on his journey, he’s not always super serious. He’s lighthearted, he’s fun, he’s got a great sense of humor, but he’s serious and he cares about all his issues.”

“Sitting there and having to care about a woman’s right to have an abortion and do a scene where I have to be Bernard caring about that and then a scene later where I’m now devastated about the law that (I just helped pass) was challenging, but it was an amazing opportunity to get to be able to do that.”