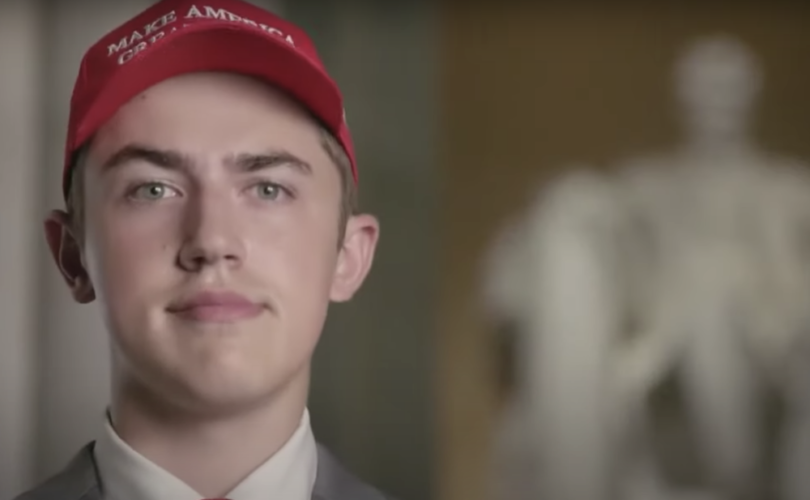 WASHINGTON, D.C., August 25, 2020 (LifeSiteNews) – Pro-life teenager Nick Sandmann offered a firsthand account of the recklessness of the mainstream media Tuesday evening at the Republican National Convention, casting the 2020 presidential election as a decision to rally around a president who stands up to press misconduct.

Sandmann was a student at Kentucky’s Covington Catholic High School who attended the 2019 March for Life in Washington DC, and found himself at the heart of a national firestorm when the press erupted with claims that a video showed him and his classmates harassing Native American activist Nathan Phillips outside the Lincoln Memorial.

But additional extended video and firsthand accounts soon revealed that Phillips was the one who waded into the group waiting for its bus and decided to beat a drum inches from Sandmann’s face, while the boys had merely performed school cheers in hopes of drowning out racist taunts from members of the Black Hebrew Israelites fringe group.

Speaking on video from the steps of the Lincoln Memorial, Sandmann walked the audience through the leadup to the incident, including his fateful decision to purchase one of President Donald Trump’s red Make America Great Again hats because Trump “has distinguished himself as one of the most pro-life presidents in the history of our country.”

“Looking back now,” he said, “how could I have possibly imagined that the simple act of putting on that red hat would unleash hate from the Left and make myself the target of network and cable news networks nationwide?”

“My life changed forever in that one moment,” Sandmann said. “The full war machine of the mainstream media revved up into attack mode. They did so without researching the full video of the incident, without ever investigating Mr. Phillips’ motives, or without ever asking me for my side of the story.”

“And do you know why?” he asked. “Because the truth was not important. Advancing their anti-Christian, anti-conservative, anti-Donald Trump narrative was all that mattered. And if advancing their narrative ruined the reputation and future of a teenager from Covington, Kentucky, well so be it.”

“And I know you’ll agree with me when we say that no one in this country has been a victim of unfair media coverage more than President Donald Trump,” he continued. “In November, I believe this country must unite around a president that calls the media out, and refuses to let them create a narrative instead of reporting the facts.”

As additional video came to light last year, many journalists and public figures quickly deleted their snap condemnations of the students. Some, however, either tried to keep the original narrative alive or refused to unequivocally retract or apologize for their initial claims, leading to various lawsuits on behalf of the boys. So far, Sandmann’s attorneys have settled lawsuits against the Washington Post and CNN. Six suits against other targets remain pending.

Unsurprisingly, mainstream media coverage of Sandmann speaking at the convention has been vague about exactly how he became famous, with once CNN caption merely writing that he “sued major media outlets over viral video.”

The 2020 Republican National Convention began on Monday evening and will run through Thursday evening. The remaining nights of the speech can be watched live through these links, and a full list of speakers can be found here.