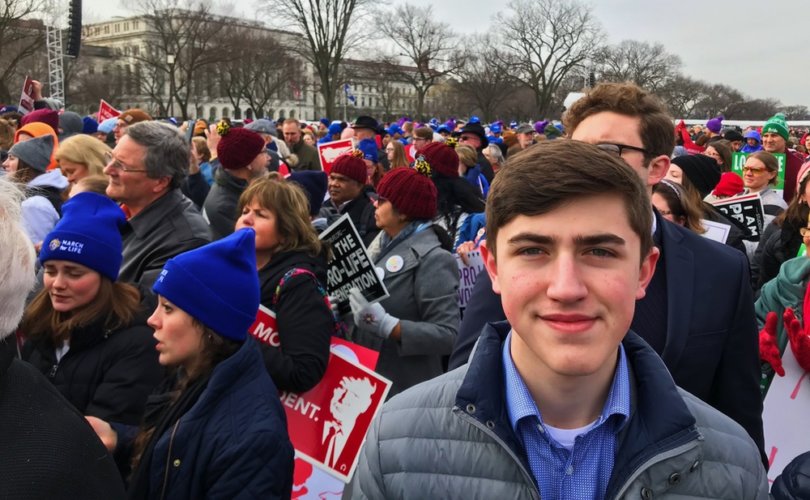 WASHINGTON, D.C., January 24, 2020 (LifeSiteNews) — Nick Sandmann, the Covington High School teen thrust into the center of an international incident at last year’s March for Life that catapulted him to fame, has returned to the scene.

Sandmann tweeted photos this afternoon of his day at the 47th March for Life:

I will never pass on an opportunity to March for Life! pic.twitter.com/iU0ohmdcTJ

Sandmann shot to fame as the youth in the MAGA hat filmed on video standing in front of Nathan Phillips as the Native American activist beat a drum close to his face. Sandmann stood with a slight smiling while his fellow classmates from a Catholic school in Kentucky stood in the background cheering.

Immediately, the press erupted with claims that the video demonstrated that Sandmann and his friends were harassing Phillips.

But additional extended video and firsthand accounts soon revealed that Phillips was the one who waded into the group waiting for its bus and decided to beat a drum inches from Sandmann’s face, while the boys had merely performed school chants in hopes of drowning out racist taunts from members of the Black Hebrew Israelites fringe group.

And as more video came to light, many journalists and other public figures quickly deleted their snap condemnations of the students, while some either tried to keep the original narrative alive or refused to unequivocally retract or apologize for their initial claims, leading to various lawsuits on behalf of the boys.

Sandmann filed defamation suits against the networks, including a $250 million suit against CNN for broadcasting into “millions of homes” the “idea that [Sandmann] was part of a mob…yelling racist slurs,” according to attorney L. Lin Wood.

On January 7, the suit against CNN was settled for an as-yet-undisclosed sum.

“This case will be tried not one minute earlier or later than when it is ready,” Wood has declared. Sandmann’s legal team stresses that the dollar amounts are not sought for the teen’s sake but to deter the press from smearing others in the future.

Exactly one year ago today, Nathan Phillips approached after the March For Life in Washington, D.C.

Today I stood in the exact same spot I had year ago and did my first fair interview compared to the setup @ NBC.

I won’t ever be bullied or surrender. Thanks for all your support

Many people responded to Sandmann’s March for Life tweet with good wishes, such as “So happy you went! Good man, Nicholas,” and “Good for you!  You should have worn your MAGA hat too!”