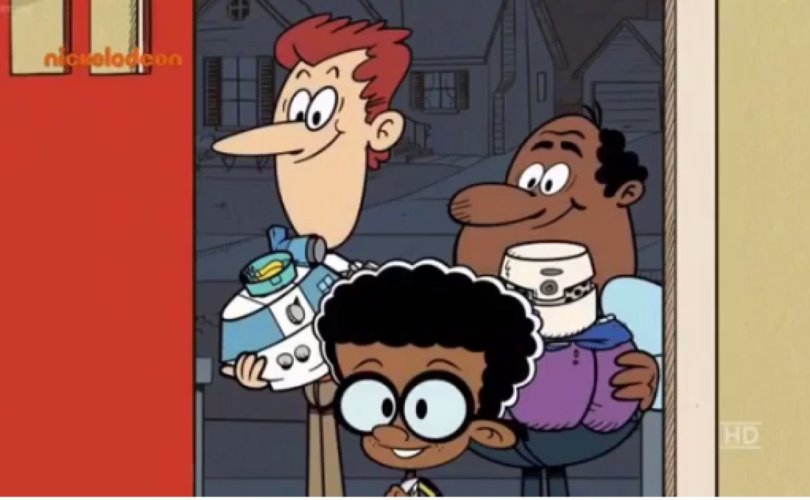 Debuting in The Loud House — a cartoon about Lincoln Loud, an 11-year-old boy with 10 sisters — the scene features a friend coming for a stayover with Lincoln.

Lincoln and his chum, Clyde McBride, have been counting down the time to the sleepover, so perhaps that’s why Lincoln announces: “Time to make history!” — before he opens the door to reveal Clyde and his two dads.

A review in PinkNews praises the episode for depicting the two men as fussy and overprotective, coming with a humidifier, white-noise machine and myriad emergency numbers — thus masterfully deflecting attention from their homosexual relationship.

Owned by Viacom Media Network, Nickelodeon targets children ages 2 to 17. It has already introduced a lesbian couple in the 2014 online finale of The Legend of Korra.

But Nickelodeon’s allegedly historic moment is certainly not the first time a homosexual couple as parents have appeared on kids’ TV show: Disney Channel’s Good Luck Charlie featured a similar scenario in 2014, when a main character opens the door to welcome a little girl coming over for a playdate with her daughter to reveal a lesbian couple.

And Cartoon Network, a cable and satellite TV channel owned by Time Warner through the Turner Broadcasting System, premiered Clarence in 2014,which had main character raised by two moms and featured an episode in which two men kiss on the cheek. Cartoon Network also airs the “genderqueer” cartoons Stephen Universe and Adventure Time.

Focus on the Family issues analyst Jeff Johnston warned in an earlier interview with LifeSiteNews that LGBTQ narratives and depictions of homosexual parents in children’s TV shows and movies inevitably would increase after the Supreme Court legalized “same-sex” marriage in its June 2015 Obergefell decision.

Moreover, entertainment invariably reflects the mainstream culture, noted Johnston, who himself was delivered from the homosexual lifestyle through a reversion to his Christian faith.

And as the American Pediatric Association noted in 2013, “the average 8-year-old” will log up to eight hours a day in front of electronic devices such as laptops, smartphones and tablets.

Johnston urged parents to be vigilant in monitoring their children’s viewing.

“[T]elevision shows, books, and movies with sexually-confusing messages … introduce children to falsehoods and immorality, and they create confusion and insecurity,” he said. “Children are not equipped to handle these adult themes.”