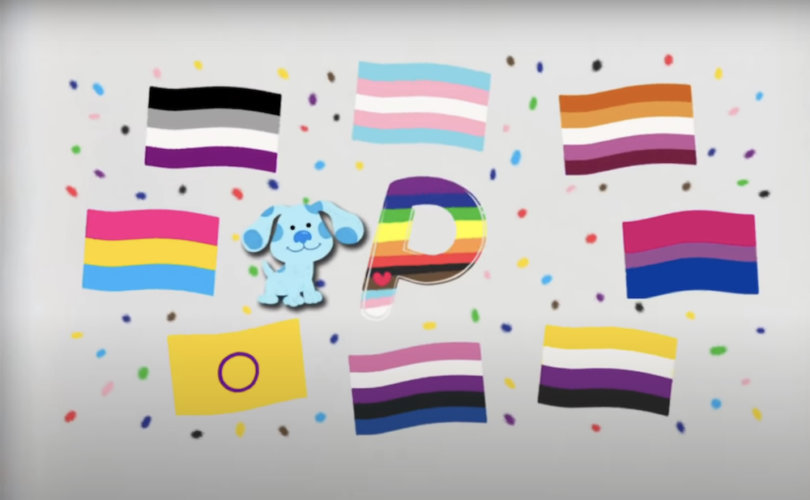 February 15, 2021 (LifeSiteNews) — Since 1996, Blue’s Clues has been a staple of early-childhood television. But like most long-running pop culture properties to make it to the present day, the show’s current stewards have injected it with a dose of pro-LGBT messaging.

On February 11, the official YouTube channel for the show’s current incarnation, Blues Clues & You!, published a video featuring a song about the alphabet. Most of the video is standard children’s fare, but as stylized letters scroll across the screen during the refrains, the letter P can be seen sporting a rainbow pattern and a heart.

When the song reaches P, it announces that “P is full of Pride!” and the letter is flanked by eight different “pride” flags. In addition to the widely-recognizable homosexual and transgender pride flags, the pro-LGBT Out identifies the others as representing non-white LGBT, asexual, lesbian, bisexual, nonbinary, genderfluid, intersex, and pansexual “pride.”

According to Breitbart, the video has not aired on television as of Friday, February 12. While the video’s words and imagery do not convey the topic of sexuality in a way that would be understandable to children watching, the clip appears intended to get children to ask their parents what the flags mean, forcing families into discussions parents may feel their children are too young for, as well as setting up potential conflicts with Blue’s Clues’ endorsement of LGBT “pride” and parents’ own values.

While the Federal Communications Commission is legally empowered to regulate children’s television content for the sake of “protecting children from potentially harmful programming and supporting parents’ ability to determine the programming their children will be exposed to at home,” current law and judicial precedent appears to define “obscene” and “indecent” material too narrowly for the above video to constitute an actionable violation.

Promoting homosexuality and gender-fluidity is nothing new for children’s television. In 2018, the final season of Cartoon Network’s Adventure Time depicted a lesbian kiss, and its Steven Universe featured a lesbian wedding. Other recent examples of “children’s” or “all-ages” animation to incorporate LGBT content include PBS’s Arthur, Cartoon Network’s Clarence; Netflix’s Voltron: Legendary Defender and She-Ra and the Princesses of Power; Nickelodeon’s The Legend of Korra and The Loud House; the Disney Channel’s Star vs. The Forces of Evil; Amazon’s Danger & Eggs; and even the preschool-aimed Disney cartoon Doc McStuffins.