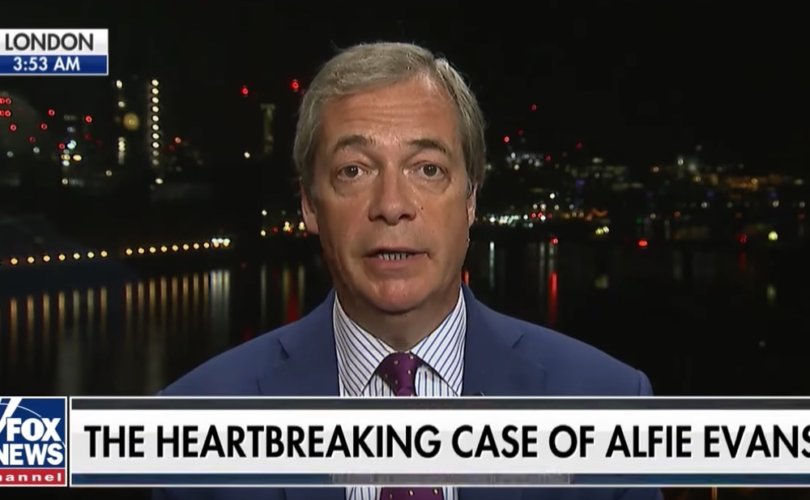 LONDON, April 27, 2018 (LifeSiteNews) – One of the United Kingdom’s leading conservative voices has lent his support to 23-month-old Alfie Evans.

“Any parent in the world who’s got a child that’s sick would move heaven and earth if somebody else could offer them a different treatment,” he said. “And yet what happens here is, our state-run medical system decides there is nothing else that can be done, and backed up by the state courts, they make a decision that those parents are not fit to move their child somewhere else.”

“So this gets to the absolute heart of how much freedom does the individual have, how much decision-making process do the parents have,” Farage continued. “Or are our children now owned by the state?”

Ingraham next brought up Tom Evans’ statement yesterday reversing his past denunciations of Alder Hey Children’s Hospital and calling on pro-Alfie protesters to disband. Some staffers have reportedly said Alder Hey would deny the family further access to Alfie unless he demonstrated a “sea change” in his attitude.

Farage would not speculate on why Evans made the statement, but he did offer some insight into its potential motives, based on his own activism in last year’s Charlie Gard case. Charlie was another sick UK infant who was denied the opportunity to receive treatment outside the country. He died at the age of eleven months.

“I turned up outside the hospital, in this case Great Ormond Street Hospital in London, and I was told in no uncertain terms by the PR services for the hospital that what I was doing was damaging the reputation of the hospital by doing press reports outside when this little boy was dying,” Farage recalled.

Some have speculated that Alder Hey is so forcefully resisting efforts to transfer Alfie because they fear an Italian hospital proving their medical assessment wrong would undermine the authority of the UK health system.

“And it is just–it’s classic of the establishment closing ranks, the state being all powerful,” Farage concluded. “And frankly what is happening today and what is happening right now is a form of state-sponsored euthanasia and I hate it.”