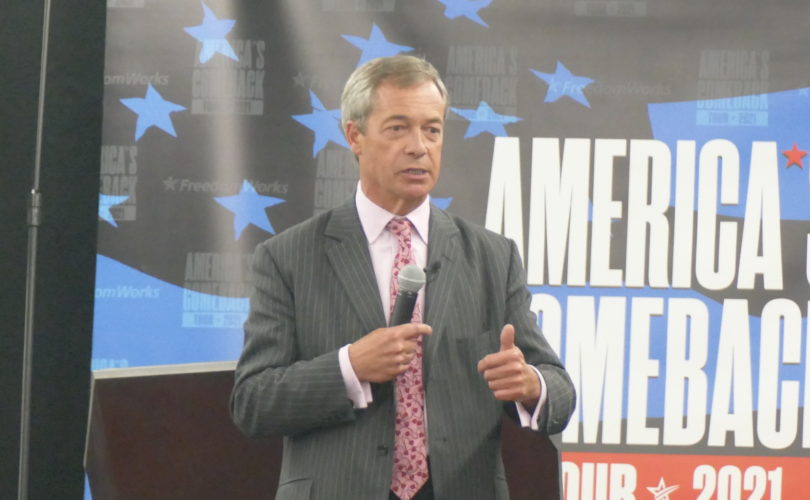 GRAND RAPIDS, MICHIGAN, May 21, 2021 (LifeSiteNews) — Nigel Farage, the key leader of the Brexit movement, has been criss-crossing the United States over the past several weeks for his “America’s Comeback Tour,” warning that “[t]he West as a whole faces a huge dilemma.”

More than 500 conservative activists and elected officials attended his rally at the DeltaPlex in Grand Rapids, Michigan, last week Friday.

Farage told LifeSite during an exclusive interview that freedom-loving Americans need to get mobilized in order to preserve their liberties.

“The West as a whole faces a huge dilemma. We’ve got an external threat of China, which we have to face up to, and we have an internal threat, which is cancel culture, woke culture,” he said. “At the heart of all of this, we’re up against Marxism and it wants to destroy the Judeo-Christian culture about which our countries are built.”

The tour, which concludes later this month, is organized by FreedomWorks. Farage was invited to Michigan by the grassroots group Stand Up Michigan, which is led by Tammy Clark and Ron Armstrong. Both spoke at the rally, focusing on the authoritarian measures taken by liberal Gov. Gretchen Whitmer (D) during the COVID-19 outbreak.

During his speech to the energized crowd, Farage speculated about a possible Trump re-election bid in 2024. He also mocked Prince Harry and his wife Meghan Markle, while urging attendees to stay active in local politics. Michigan has taken on much more national importance since President Trump unexpectedly won the state by 11,000 votes in 2016.

Free people never give up the right to govern themselves. That is what America’s Comeback Tour is all about.

Farage told LifeSite that Joe Biden’s White House has been “in perpetual crisis, perpetual crisis, whether it’s gas lines, inflation, the border, and now Israel.” Farage added that he now believes conservatives “want to start getting organized and start fighting back.”

LifeSite will publish a full report on the rally in the coming days.