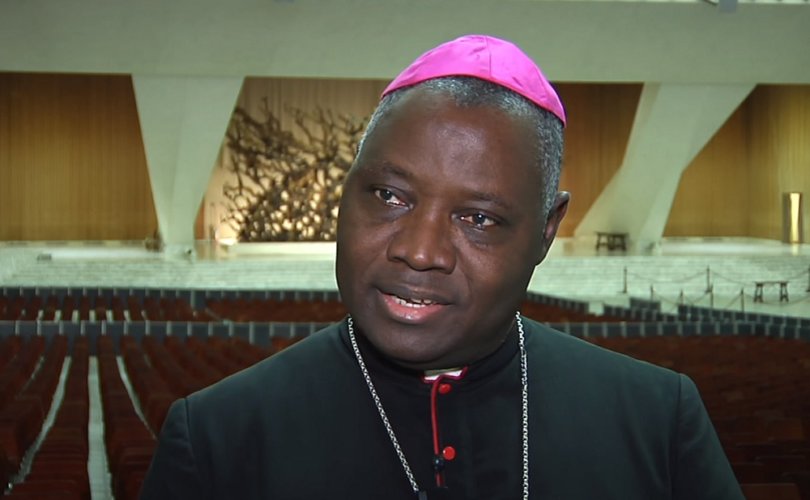 In a recent interview with Crux magazine, Archbishop Ignatius Kaigama of the Nigerian archdiocese of Abuja said that he found Biden’s determination to fund abortion overseas “intriguing.”

“As I understand it, President Biden’s memorandum reverses restrictions on abortion access domestically and abroad imposed and expanded by the Trump administration,” Kaigama, 62, said.

“It is intriguing that one of Biden’s first official acts is to promote the destruction of human lives domestically and in developing nations. This order does not stand to reason; it violates human dignity.”

The Nigerian archbishop said Biden should use his position to “prioritize the most vulnerable, including unborn children.” He emphasized also that even the most modern Popes have steadfastly condemned abortion and infanticide as the “deliberate killing” of children.

“Vatican II and all the Popes down to Pope Francis have described the deliberate killing of a child before or after birth as a most grievous violation of God’s commandments,” Kaigama said.

“Life must be protected with the utmost care from the moment of conception: abortion and infanticide are abominable crimes,” he continued.

“As Bishops, we have always reiterated that abortion is a direct attack on life that also wounds the woman and undermines the family and above all, it offends God.”

Kaigama’s fellow Nigerian Catholic, Obanianuju Ekeocha, the U.K.-based founder and president of Culture of Life Africa, produced a video message to Biden at the end of January, stressing that abortion is not an African value.

While abortionists and pro-abortion activists of the West were unhappy when in 2017 then-president Donald Trump reinstated and expanded the Mexico City Policy (which he renamed Protecting Life in Global Health Assistance), denying federal funding to organizations that insist on committing and promoting abortion abroad, Africans rejoiced.

“Back in Africa, of course, people were happy at the time,” Ekeocha related.

The pro-life Africans watched in amazement as Westerners like Melinda Gates “tied themselves into knots” over the ban and Democrats made campaign promises to resume the funding of the abortion of foreigners overseas.

Ekeocha included in her video a clip of Biden being feted by International Planned Parenthood and stating that “we [Americans] are their [developing nations’] saviors around the world.” The Nigerian woman said she found it “horrifying” that Biden would call “himself and his pro-abortion peers the ‘saviors’ of the developing world.”

“That this man [is now] the newly elected president of the United States means that money will go into the pockets of organizations that are, in fact, abortion giants like International Planned Parenthood, Marie Stopes International, DKT International,” Ekeocha said.

“[It means] that they will now go with a strong mandate from the United States … being funded by the enormous wealth of the United States … into the developing world, the world of the poor, essentially, to promote, propagate and to provide abortions,” she continued.

“This means the elimination of my people.”

When Ekeocha saw in Biden’s first executive actions his plans to reverse President Trump’s pro-life initiative, she reached out to her friends in different African countries to ask how they felt about foreign organizations committing abortions in Africa. Several young women sent messages to the new government elect, through Ekeocha’s video, expressing their pro-life cultural beliefs.

“Africa intends to be abortion free.”

Ucheci, a student nurse, begs the American government not to send funding for abortion because “we’re not interested; it’s not our priority.”

There is no doubt that women in developing nations have real medical needs that should be addressed. Fiorella Nash, author of The Abolition of Woman: How Radical Feminism Is Betraying Women, told LifeSiteNews today that “the West’s obsession with imposing abortion on Africa is costing lives.”

“Funds that should be going to improving maternal health care [are] instead being put into campaigning for and promoting abortion,” she noted.

“We should not forget that the biggest killer of women in childbirth in Africa is haemorrhage, followed by sepsis. These are complications that can be quickly and effectively treated — and are in Western hospitals, for the most part. And yet we do not extend the same courtesy to African women.”

Nash recalled a debate she had with an abortion activist who accused President Trump of “neo-colonialism” for reinstating the Mexico City Policy. Nash told the woman that this was “nonsense.”

“Because what Trump was doing was adopting a policy that is in agreement with the overwhelming majority of Africans, right across the African continent,” she explained.

When Nash informed the activist that 92% of Ugandans, for example, are against abortion, the woman indicated that the wishes of the remaining 8% should prevail.

“It is sheer imperialism. It’s the belief that ‘we know best, our values are more important, and we just have to convert the rest of the world to our way of seeing things.”

“To me that is simply neo-colonialism.”