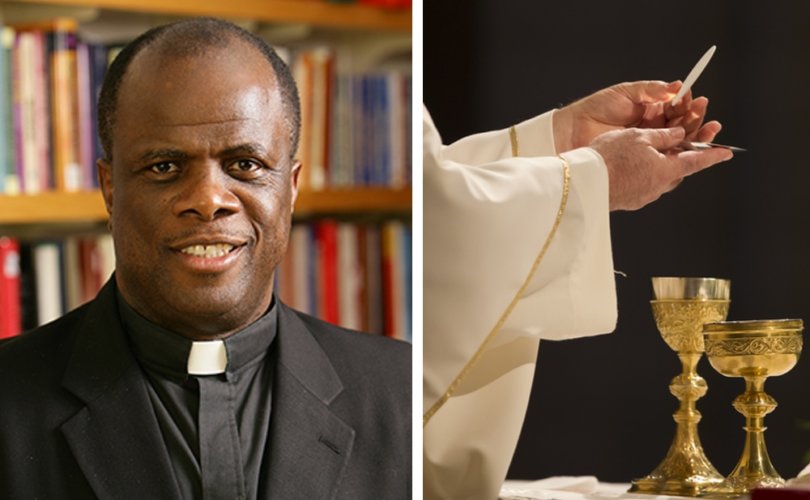 ROME, March 22, 2017 (LifeSiteNews) — A Nigerian priest and renowned theologian said adulterers in Africa know that their sin prohibits them from receiving Holy Communion and would not present themselves because “they already accept that these are the rules.”

Father Paulinus Odozor, an associate professor of theology at the University of Notre Dame, said the controversy raised by Chapter 8 of Pope Francis’ Amoris Laetitia is not Africa’s problem.

The exhortation, published one year ago, has been used by various dissenting bishops and cardinals as their argument to give Communion to those committing grave sin, including adulterers and those living in cohabitation, practices contrary to perennial Catholic teaching.

Odozor was reached in Rome, where he is the main organizer for a March 22-25 conference titled “African Christian Theology.”

Speaking on Sirius XM’s “The Crux of the Matter” on Monday, he said that adulterers not being able to receive Communion is “settled” in Africa.

“They can’t [receive],” he said when directly asked whether a Catholic in Africa who divorces and remarries outside the Church can receive Communion.

“We settled that long ago,” he said. “Everyone’s OK with it.”

When Odozor was pressed if his statement about no communion for adulterers being settled was true in all of Africa, or only for some parts of it, he replied that it simply was not an issue.

“Basically, our problem in Africa is not with divorce, remarriage, and Catholics receiving the sacraments. Our problem is what to do with polygamy and polygamous families and so on.”

“If you go to the ordinary parishes in most of Africa, you will find that people who are in the situation you’re talking about would not present themselves for Communion because they already accept that these are the rules. It’s not an issue, especially given that people now have a chance to examine their marriages and ask if they were validly done [through the annulment process]. If it was validly done, then, well … too bad!” he said.

The practice of polygamy in Africa continues to be widespread. Famous polygamists include the King of Swaziland, who currently has 15 wives, and Jacob Zuma, fourth president of South Africa, with six wives and 20 children.

In January, African Cardinal Wilfrid Napier suggested that if Pope Francis’ exhortation actually allows Westerners in irregular situations to receive Holy Communion, it would make the Catholic Church in Africa, which has fought long and hard against polygamy, lose credibility among its people.

“If Westerners in irregular situations can receive Communion, are we to tell our polygamists & other ‘misfits’ that they too are allowed?” he tweeted on January 5.