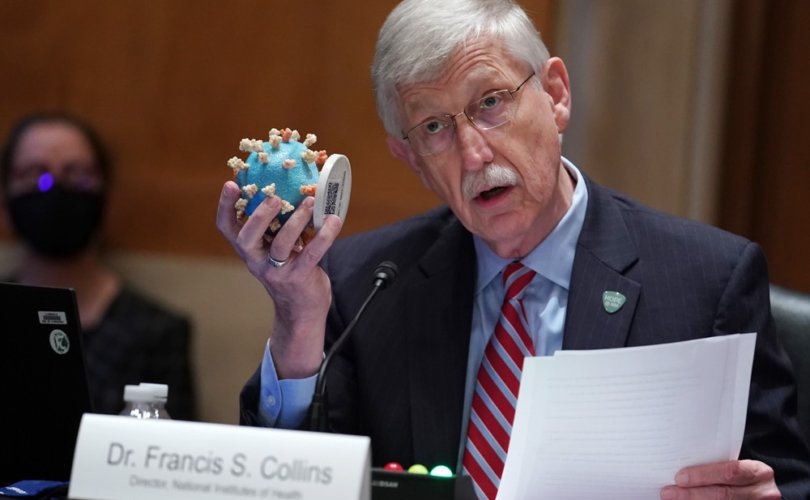 (LifeSiteNews) — As controversy heats up over the U.S. National Institutes of Health (NIH)’s involvement in funding dangerous gain of function research in Wuhan, China before the onset of the COVID-19 pandemic, NIH director Dr. Francis Collins has announced he will resign from his position by the end of 2021.

The announcement comes after 900 pages of documents providing evidence that the NIH funded research to make bat coronaviruses more transmissible to humans were released in September, following a Freedom of Information Act lawsuit by The Intercept.

In an October 5 statement announcing his departure, Dr. Collins said “[i]t has been an incredible privilege to lead this great agency for more than a decade.”

Collins had served in the role for the longest period of any NIH director, having been appointed by former President Barack Obama in 2009.

“I fundamentally believe, however, that no single person should serve in the position too long, and that it’s time to bring in a new scientist to lead the NIH into the future,” Collins added.

To date, no interim director has been named to take Collins’ position.

On Tuesday, Collins spoke to NPR to discuss his resignation, taking the opportunity to decry opposition to the COVID-19 narrative propounded by the NIH and other public health agencies that have advocated for universal masking, lockdowns, and the mass deployment of experimental inoculations, measures that have led to serious psychological, emotional, and physical harm.

Saying he saw great strides made by science during his career, Collins expressed disappointment that “we find ourselves here today, particularly with COVID-19, where our culture wars have taken on an attitude about scientific facts that is not just inconvenient, it’s actually resulting in people dying.”

Some have speculated that Collins’ decision to step down is connected with increased public scrutiny into the involvement of the NIH in financially backing research to artificially enhance bat coronaviruses in Wuhan, China, before the COVID-19 outbreak last year.

Documents obtained over the past year have shown that the National Institutes of Allergy and Infectious Diseases (NAIAD), a sub-agency of the NIH headed by White House COVID czar Dr. Anthony Fauci, funneled money through New York-based non-profit Eco Health Alliance to support gain of function research conducted at the Wuhan Institute of Virology (WIV).

EcoHealth Alliance, led by president Dr. Peter Daszak, used American taxpayer dollars to work collaboratively with the Wuhan lab, artificially enhancing the viruses to study how they jump from animals to humans.

As reported by the New York Post, the NIH had awarded a $3.1 million grant to EcoHealth over a five-year period between 2014 and 2019, $599,000 of which was directed to go to the Wuhan Institute of Virology for bat coronavirus research.

The funding was renewed in 2019. However, in April 2020, after the nature and extent of EcoHealth’s research was called into question after the rapidly spreading COVID-19 outbreak, then-President Donald Trump ordered the NIH to cancel the payout of the remaining $369,819.

During Senate testimony, Dr. Fauci has continuously denied charges that the United States funded gain of function research, leading Republican Sen. Rand Paul of Kentucky to submit a criminal referral to the DOJ alleging that Fauci lied to Congress.

In June, Dr. Collins appeared to contradict Fauci’s statements to Congress, admitting that the NIH indeed funded the research.

“[T]he grant funds that went to Wuhan, which were a subcontract from Eco Health, were very specifically aimed to try to categorize viruses that they could isolate from bats in Chinese caves, which we had a good reason to want to know more about, given SARS and MERS that had come out of there,” Collins said.

“And, of course, the amount of money that we were providing to the Wuhan Institute of Virology, I’m sure, was a tiny fraction of their total funding,” the NIH director continued, adding that the NIH “had no control over what else they were doing with those funds.”

An analysis by the National Pulse suggested Collins was driven to resign because of the controversy surrounding the NIH’s close ties to the Wuhan lab.

“[I]t is unlikely Collins’s belief in a revolving door at the NIH that has prompted the move,” the analysis suggested.

Instead, the National Pulse raised the possibility that Collins opted to step down due to “pressure mounting on key public figures such as his minion Anthony Fauci and arms-length brother-in-arms Peter Daszak.”

“[H]e backed the Wuhan experiments that most likely caused the death of 700,000 Americans. If he’s resigning to try and avoid accountability, we must NOT let that happen,” Hilton said, noting also that Dr. Collins “co-wrote the notorious 2011 Fauci op-ed pushing Gain of Function research.”

Francis Collins co-wrote the notorious 2011 Fauci op-ed pushing Gain of Function research. he backed the Wuhan experiments that most likely caused the death of 700,000 Americans. if he’s resigning to try and avoid accountability we must NOT let that happenhttps://t.co/L0NFOXU6AW

Beyond controversy surrounding the origins of COVID-19, Collins’ work regarding human genetics has led to sharp criticism by pro-life bioethicists.

As reported by the Washington Free Beacon, under Collins the NIH granted millions of dollars for research projects involving the implantation of organs from aborted babies into mice.

Dr. David Prentice, an adjunct professor of molecular genetics at the Catholic University of America, told the Free Beacon the NIH has regressed scientifically and ethically during Collins’ tenure.

Such biomedical research included a study funded by Dr. Fauci’s NIAID and conducted at the University of Pittsburgh in 2020, which involved grafting human fetal scalps onto mice to study skin conditions.

David Daleiden, founder and president of the pro-life Center for Medical Progress, told the Free Beacon, “Dr. Collins’s time as NIH director has been marked by unprecedented levels of taxpayer funding for grotesque and illegal experiments with aborted baby body parts and even live-aborted infants.”

Noting that Collins announced his resignation less than two weeks after more than 100 Congressmen put their signatures to a letter calling upon the NIH to release details surrounding its connection with University of Pittsburgh’s fetal research, Daleiden suggested that “[b]efore he leaves the NIH directorship, Dr. Collins should comply with the congressional document requests in full and salvage his legacy by revealing the full truth about government-sponsored trafficking of aborted infants.”