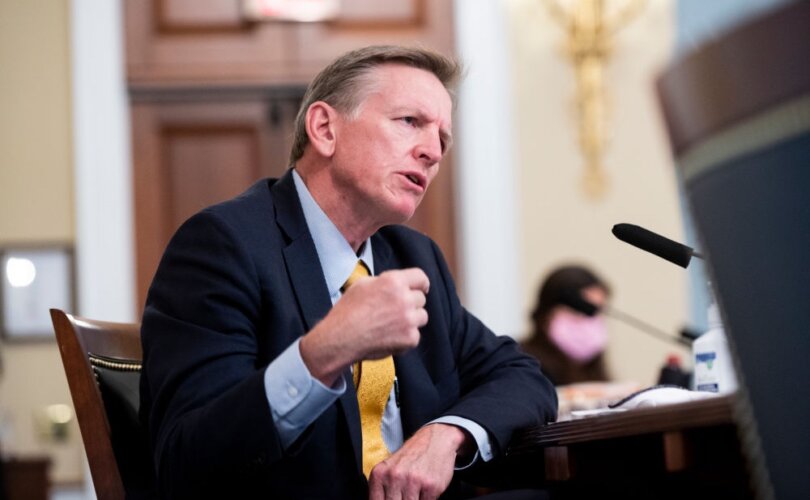 BETHESDA, Maryland (LifeSiteNews) — The Biden administration’s National Institutes of Health (NIH) this week gave a generic non-answer in response to Arizona Republican U.S. Rep. Paul Gosar’s October request that the agency explore the  scientific research behind so-called “Gender Affirming Care” (GAC) for minors. GAC uses drugs and surgeries to make patients appear more like the opposite sex and can cause permanent physical and psychological damage.

In a form-letter style response sent a month after Rep. Gosar made the request, NIH acting director Dr. Lawrence A. Tabak, D.D.S., Ph.D. thanked the Republican for his “interest in this upcoming NIH-sponsored workshop” and assured him the agency “strives to foster fundamental creative discoveries, innovative research strategies, and their applications as a basis for ultimately protecting and improving health for all Americans, including transgender and gender-diverse populations.”

Continuing in broad terms, Tabak added that the NIH “encourages research across a variety of sexual and gender minority (SGM)-related topics, including how social and medical transition, along with behavioral factors, impact outcomes for gender-diverse populations.”

In a statement shared with LifeSiteNews via email Wednesday, Gosar said the “disappointing” response to his urgent call to address the real-world damage of so-called “Gender Affirming Care” didn’t come as a surprise.

“While not surprising, it is nonetheless disappointing to receive a canned response from Acting FDA Director Tabak,” he said.

“I have very little hope that this radical administration will rethink their destructive agenda that is leaving young children sterilized and psychologically injured. It pains me to think of the suffering that is endured by those being misled by so-called medical professionals,” Gosar concluded.

The Arizona Republican had made his request in an October 21 letter addressed to NIH Acting Director Tabak and Dr. Karen Parker, Ph.D., M.S.W., who heads up the NIH’s Sexual & Gender Minority Research Office (SGMRO).

Urging officials to dig into relevant research during their upcoming SFMRO workshop, Gosar said existing academic literature shows that transgender drugs and surgeries can cause irreparable harm including “infertility and other serious permanent medical maladies.”

“That any of these surgeries and treatments are being provided to minors is nothing short of child abuse,” he argued.

Our children are the very future of our civilization, and they must be protected at all costs.

Here is my letter to the NIH opposing the use of tax money to sexually mutilate and castrate children. pic.twitter.com/nBTg5aEgyQ

In the NIH letter obtained by LifeSiteNews, the agency’s acting director wrote that the October 18 Request for Information (RFI) that had prompted Gosar’s letter “seeks to gather input from key partners and the public on research opportunities” including transgender treatments for children, adolescents, and adults, as well as “systemic and institutional policies.”

According to the letter, the NIH is backing a variety of studies to ascertain “the short- and long-term impacts of gender-affirming care.” In the response, Tabak acknowledged that “many questions remain unanswered” concerning the ancillary effects of transgender treatments.

The NIH’s admission that “many questions remain unanswered” regarding the short- and long-term effects of transgender “care” comes as gender clinics across the U.S. actively prescribe puberty-blocking drugs and perform surgical interventions for adolescents and adults. Over the past five years, as social acceptance of transgenderism has increased, rates of transgender medical mutilation for minors have spiked.

In his October letter, Gosar had referenced several studies which, far from proving the safety or efficacy of transgender treatments, serve to underscore their serious risks.

The Arizona Republican representative drew attention to a 2011 Swedish cohort study that found that “persons with transsexualism, after sex reassignment, have considerably higher risks for mortality, suicidal behavior, and psychiatric morbidity than the general population.” It remains unclear how the suicidality rate among “transgender” people post-reassignment compares with the suicide rates of those who don’t obtain surgical intervention.

Rep. Gosar also referred to a “heavily cited 2019 study” by Richard Bränström Ph.D. and John E. Pachankis, Ph.D., that had appeared to support the theory that “GAC” improves mental health. However, that study was later retracted, and a 2020 correction found the “results demonstrated no advantage of surgery in relation to subsequent mood or anxiety disorder-related health care visits or prescriptions or hospitalizations following suicide attempts in that comparison.”

Transgender hormone drugs have been linked to serious and potentially fatal side effects, including cardiovascular disease, increased risk of stroke and cancer, sterilization, and psychological issues.

“Sex change” surgeries, meanwhile, can cause lifelong mutilation due to the permanent destruction of healthy body parts.

Given the dearth of scientific backing for transgender surgeries and hormone treatments, Rep. Gosar said the NIH should investigate the use of psychological counseling, instead of surgery or pharmaceuticals, to treat gender dysphoria.

Without referencing the potential for alternatives to surgical and pharmaceutical interventions, however, the NIH said in its November 21 response that the ongoing research supported by the agency forms part of “a comprehensive plan to advance the health of sexual and gender minorities.”

“It is the agency’s goal that the NIH Scientific Workshop on Gender-Affirming Care for Transgender and Gender-Diverse Populations will highlight current gaps in and identify opportunities for gender-affirming care-related research that will help to drive this field of scientific inquiry forward,” the letter said.

The NIH’s vaguely-worded response to Gosar’s demand comes as revelations regarding ongoing transgender medical interventions, particularly for minors, have generated outrage among opponents and spurred a thriving political movement to protect children against chemical castration and physical mutilation.

1
Catholic school board suspends Josh Alexander for rest of the year for opposing gender ideology
2
WATCH: Grandma of sex-trafficked teen gives gut-wrenching testimony on authorities ‘blinded’ by trans ideology
3
Former NFL linebacker dies suddenly at 25, no cause of death given
4
How the US gov’t built a shadow structure that enabled COVID vax ‘bioterrorism’
5
Students who attended March for Life kicked out of Smithsonian for wearing anti-abortion hats
Subscribe to Daily Headlines »