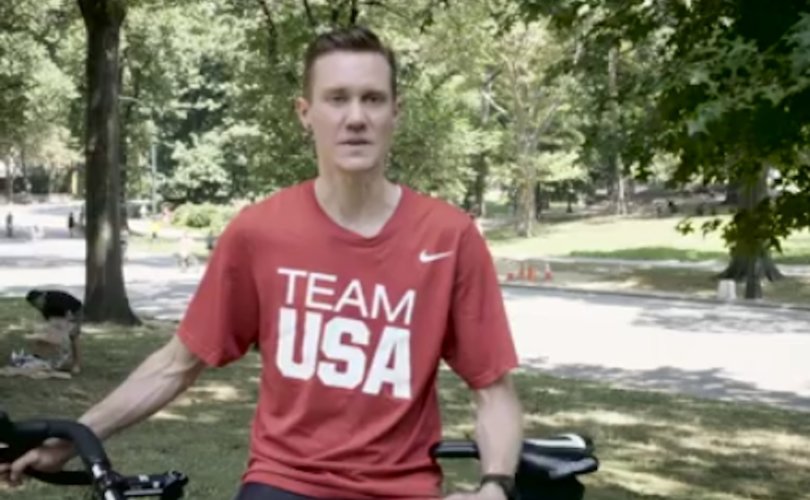 RIO DE JANERIO, BRAZIL, August 10, 2016 — Of all the potential gold-medal contenders at the Summer Olympics, the world's most valuable sports brand is showcasing a transgender “man.”

Nike is featuring Chris Mosier in a commercial shown during primetime on NBC. Mosier is a duathlete for the U.S. men's team in a sport that's not part of the Olympics.

Mosier says she is happy with the media attention, which she believes positively “further(s) the conversation on trans-inclusion in sports.”

She also hopes to inspire others to follow her example. “It's an amazing opportunity for other people to see themselves reflected in someone succeeding in sports as a trans man.”

Mosier told Rolling Stone, “That's what really drives me – being the athlete that young trans athletes can look at and see themselves in. … I want to be the person I needed 10 years ago.”

New International Olympic Committee rules allow men to compete as women and vice versa if they have taken opposite-sex hormones for one year. Women compete against men without restriction; men compete against women as long as their testosterone levels fall within “the normal female range” by taking antiandrogen and estrogen.

“We can respect this young woman's tremendous athleticism, but we must not celebrate her gender rebellion,” Peter LaBarbera, President of Americans For Truth About Homosexuality, told LifeSiteNews. “Nike is joining with this confused woman to become a 'change agent' for transgenderism.”

“Sadly, this will only draw more young people into this disordered lifestyle,” predicted LaBarbera, adding that transgenderism is “a lifestyle which centers around rejecting one's God-given sex and often mutilating one's own body.”

“Nike could have honored one of the many American Olympic stars competing in Rio,” LaBarbera concluded, “but instead they chose to pander to political correctness.”

“Liberals are intent on overturning gender, and then claim they are the party of science,” Media Research Center Vice President Dan Gainor told LifeSiteNews.  “Now they are using the Olympics to push this immoral agenda and, naturally, the media and left-wing businesses are helping all they can.”

“This is why conservatives can't turn a blind eye to culture, or think they can protect their own families from the garbage media.  They simply can't,” Gainor added.  “The left pushes a left-wing narrative in every type of media — TV shows, movies, news and commercials.”

Proponents of the new Olympic transgender rules say the competitive advantage men have over women is eliminated when the male athletes take female hormones, and the testosterone that women athletes inject is not a performance-enhancing drug but is part of the woman's “transitioning” into a “man.”

In passing the new transgender rules, the International Olympic Committee emphasized that its main objective is “the guarantee of fair competition.”

But the new transgender rules are not without controversy. One former Olympic competitor, Ronda Rousey, publicly spoke against them because she says men have an athletic advantage against women.

Rousey pointed to mixed martial arts transgender athlete Fallon Fox as an example. “She can try hormones, chop her pecker off, but it's still the same bone structure a man has. It's an advantage. I don't think it's fair.”

A Rolling Stone story on Mosier reveals her life followed a path similar to many gender-confused people. She admits, “I was confused about who I was,” and, “I didn't know the language of what I felt.”

An accomplished athlete in many sports, Mosier said competing with other women felt “uncomfortable and anxiety inducing.” She also shared frustration with her body. “I was upset with breasts. I worked so hard to have my body look and compete the way I wanted it to. But I didn’t have the flat chest and a six-pack that I thought I would.”

She attended Northern Michigan University and intentionally stayed very active because “busy felt safe.” “I didn't have enough time for relationships,” she says, “or have people get to know me.”

Mosier dated men throughout her college years and then met a woman and fell in love.  She later “married” Zhen Heinemann.

Even though she is “married” to a woman, she does not consider herself homosexual. “I would get furious if people said we were lesbian. I would think, 'That doesn't fit for me. That's not right because I’m not gay.'” Instead, she identifies herself as “Queer.”

She began injecting testosterone in 2010, when she first started calling herself a man, changing her gender on documents, and competing against men.

“How tragic it is, that when we have so much to celebrate at Rio, Nike chose to honor a person who rejects God's wonderful creation in her fictional quest to become the 'man' she can never truly be,” LaBarbera commented.

At least 40 open homosexuals are competing in this summer's Olympics.