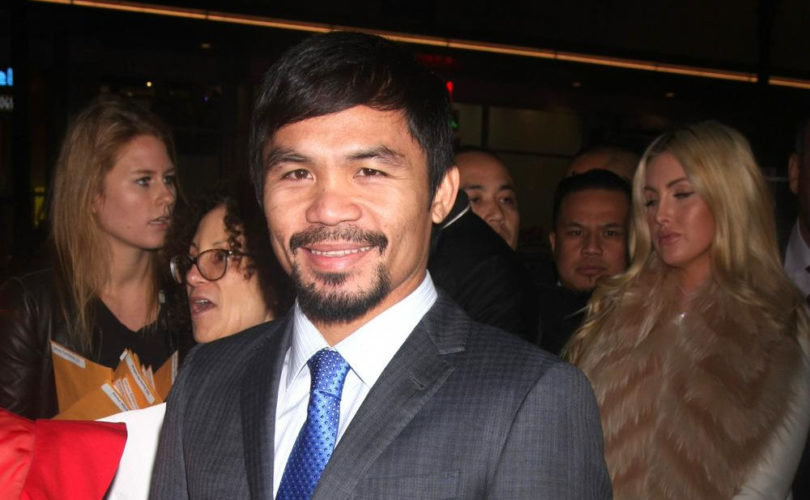 URGENT: Stand with Manny Pacquiao against the LGBT bullies. Sign the petition NOW!

“We find Manny Pacquiao’s comments abhorrent,” stated the company. “Nike strongly opposes discrimination of any kind and has a long history of supporting and standing up for the rights of the LGBT community. We no longer have a relationship with Manny Pacquiao.” The company paid him $1 million yearly for his endorsement, according to Total Sportek. Pacquiao’s career earnings are reported to top $300 million.

Pacquiao, 37, a winner of world championships in eight weight classifications, was asked by a Manila TV station as he trained for a US fight next year what he thought of same sex “marriage.” “It’s common sense,” the boxer responded. “Will you see any animals where male is to male and female is to female? The animals are better. They know how to distinguish male from female. If we approve male on male, female on female then man is worse than animals.”

Celebrities such as basketball great Magic Johnson and the boxer’s own promoter, Bob Arum, have lined up to condemn Pacquiao, before and after he issued an apology.  The boxer said, “I'm sorry for hurting people by comparing homosexuals to animals. Please forgive me for those I've hurt. I still stand on my belief that I'm against same-sex marriage because of what the Bible says, but I'm not condemning LGBT. I love you all with the love of the Lord. God Bless you all and I'm praying for you.”

Already the media-savvy homosexual lobby is working on Pacquioa’s other sponsors, agitating for a boycott. The NewCivilRightsMovement website is reporting that a Manhattan LGBT activist and graphic designer, Scott Wooledge, has put out a graphic featuring the boxer beside sponsors’ logos. “I am DONE eating ‘Wonderful Pistachios’ until @getcrackin takes hateful #Mannypaquiao is off my TV screen. #LGBT,” he tweeted yesterday.

Meanwhile, a Washington news source, the Free Beacon, went after Nevada Senator Harry Reid, noting that he “remains mum” on the boxer to whom the politician once gave a day-long tour of Washington, D.C.

In the Philippines the few celebrities who condemned Pacquiao, such as TV personality Manny Padillo and homosexual entertainer Vice Gandi, have publicly forgiven him, perhaps because of the overwhelming flood of support from Filipinos manifested on his Facebook page and other social media. Many said that if Nike dropped Manny Pacquioa, they were boycotting Nike.

URGENT: Stand with Manny Pacquiao against the LGBT bullies. Sign the petition NOW!