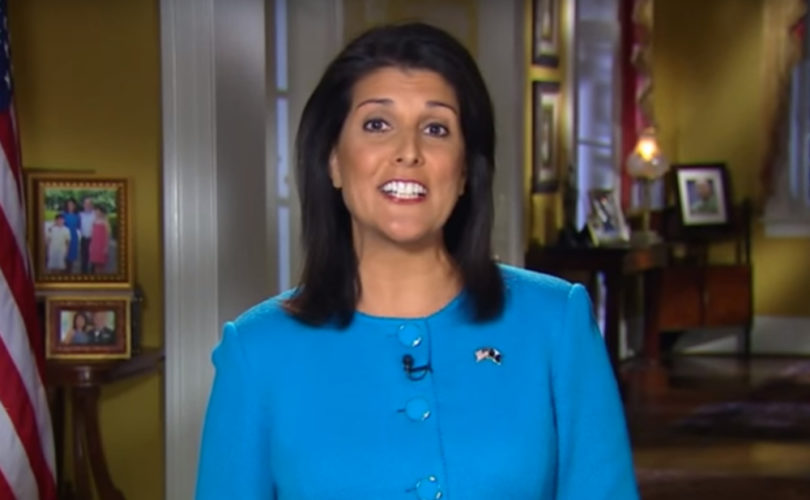 “If we [Republicans] held the White House,” she said, “we would respect differences in modern families, but we would also insist on respect for religious liberty as a cornerstone of our democracy.”

Even the terminology “modern families” evokes the ABC sitcom featuring a homosexual couple raising a child.

The GOP has been uncertain how to respond to the Supreme Court's Obergefell v. Hodges case, with only one of the top-tier candidates – Ted Cruz – campaigning for a Constitutional amendment returning the issue to the states.

Many candidates and the GOP's most powerful policy makers have instead said the GOP must “move on” from the ruling, accepting the 5-4 decision as settled law but acting to grant some protections to those who have religious objections to participating in same-sex “marriage” ceremonies.

The speech by Haley, who was hand chosen for the response by the Republican Party's leadership, amplifies that decision to accept redefined marriage as the new normal.

She also agreed with President Obama that Muslims should be allowed to continue immigrating to the United States, calling on Americans to reject “the siren call of the angriest voices.”

“There’s a tendency to falsely equate noise with results,” she said. “We must resist that temptation.”

She concluded by vowing that modern Republican policies will “keep America the greatest country in the history of man. And woman.”