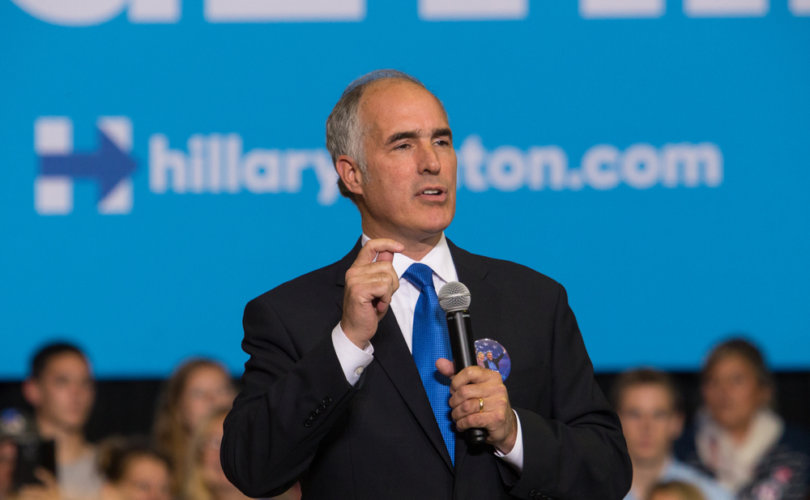 Pennsylvania Senator Bob Casey, a Catholic who dissents on same-sex marriage, will speak at the commencement ceremony at Boston College and will receive an honorary degree.George Sheldon / Shutterstock.com

May 8, 2017 (CardinalNewmanSociety) — This spring’s commencement honorees at nine Catholic colleges include pro-abortion politicians, a dissenting priest, and advocates for same-sex marriage, according to The Cardinal Newman Society’s annual review of commencement speakers and honorary degree recipients at more than 200 Catholic colleges in the United States.

“It’s important to note that these colleges are going in the opposite direction of Catholic education generally, as Catholic identity continues to improve nationwide,” said Patrick Reilly, president of The Cardinal Newman Society. “Still, these colleges seem intent on perpetuating the public scandals that we have seen on Catholic campuses for many years. It’s an affront to faithful Catholics when a Catholic college honors politicians like Maria Vullo and Xavier Becerra, who just this year took strident actions to defend and promote abortion.”

The Catholic community and Catholic institutions should not honor those who act in defiance of our fundamental moral principles. They should not be given awards, honors or platforms which would suggest support for their actions. [emphasis in original]

By holding up those who publicly oppose Catholic teaching as role models for students, administrators at these Catholic colleges violate the mission of Catholic education.

The Cardinal Newman Society has identified concerns about commencement honorees, including commencement speakers and honorary degree recipients, at the following Catholic colleges:

Pennsylvania Senator Bob Casey, a Catholic who dissents on same-sex marriage, will speak at the commencement ceremony at Boston College in Chestnut Hill, Mass., on May 22. College President Father William Leahy, S.J., will present Casey an honorary degree.

When Sen. Casey was asked to give a lecture at Alvernia College in Reading, Penn., in 2013, the Diocese of Allentown opposed the invitation, noting that the public supporter of same-sex marriage was “increasingly in disagreement with the Church on issues involving Church teaching.”

Also, although he has repeatedly proclaimed himself to be pro-life, Sen. Casey visited a Planned Parenthood in March and has voted against defunding the abortion provider.

Maria Vullo, superintendent of the New York State Department of Financial Services, will receive an honorary doctorate and give the commencement address at the College of Mount Saint Vincent in Riverdale, N.Y., on May 20.

Vullo has worked to force insurance companies to provide free coverage for contraceptives and “medically necessary” abortions. “New York will not tolerate any impediments or impairments of women’s rights and access to reproductive health care,” Vullo declared.

DePaul University College of Law in Chicago, Ill., will honor attorney Paulette Brown as its commencement speaker and honorary degree recipient on May 14.

One of Brown’s signature achievements while president of the American Bar Association was a rule tightening prohibitions against attorney “discrimination” on the basis of “gender identity” and “sexual orientation,” which poses a serious threat to the religious freedom of Christian attorneys. Brown advocated including “gender expression” as an additional protected class.

Loyola University Chicago will honor Mary Frances Berry, former chairwoman of the Commission on Civil Rights and professor of American Social Thought and History at the University of Pennsylvania, as speaker at the May 9 commencement exercises for the Graduate School and Institute of Pastoral Studies. Berry has publicly advocated (see also here and here) the legalization of same-sex marriage.

Father Greg Boyle, S.J., founder and executive director of Homeboy Industries which focuses on gang member intervention and rehabilitation, will deliver the commencement address at Regis University’s ceremonies in Denver on May 7. He will also be honored on May 21 by the University of Notre Dame in South Bend, Ind., with the Laetare Medal, the university’s highest honor for an exemplary Catholic. (The medal was given to pro-abortion Vice President Joe Biden last year.)

The Sycamore Trust, an organization committed to enhancing Notre Dame’s Catholic identity, reports that while Fr. Boyle has done “admirable work in Los Angeles with men and women who have been in prison and with gangs, but he has also repudiated the Church’s teaching on gay marriage as contrary to God’s will and has ridiculed the Church’s bar to ordination of women and its withholding of Communion from Catholics married outside the Church.”

Xavier Becerra, California’s pro-abortion attorney general, will deliver the School of Law commencement address at the University of San Francisco on May 20.

During his tenure as U.S. Congressman for the 30th District of California, Becerra earned a 100 percent rating from Planned Parenthood and NARAL for his votes against a ban on partial-birth abortion, supporting funding for abortions overseas, against a ban on human cloning, and in favor of embryonic stem cell research.

Michael Bloomberg, three-term mayor of New York City, will speak at Villanova University’s commencement ceremonies on May 19 in Villanova, Penn., and will receive an honorary degree.

Bloomberg is strongly pro-abortion and has been critical of pro-life Democrats, saying, “Reproductive choice is a fundamental human right, and we can never take it for granted,” and adding, “On this issue, you’re either with us or against us.”

Xavier University of Louisiana will honor a public advocate of abortion, U.S. Congressman Cedric Richmond from Louisiana’s 2nd Congressional District, as its commencement speaker and honorary degree recipient in New Orleans, La., on May 20.

Congressman Richmond supports legal abortion: “Every woman has been guaranteed the right to dictate her own reproductive health by the Supreme Court and no one should have the ability to make that decision for her.”