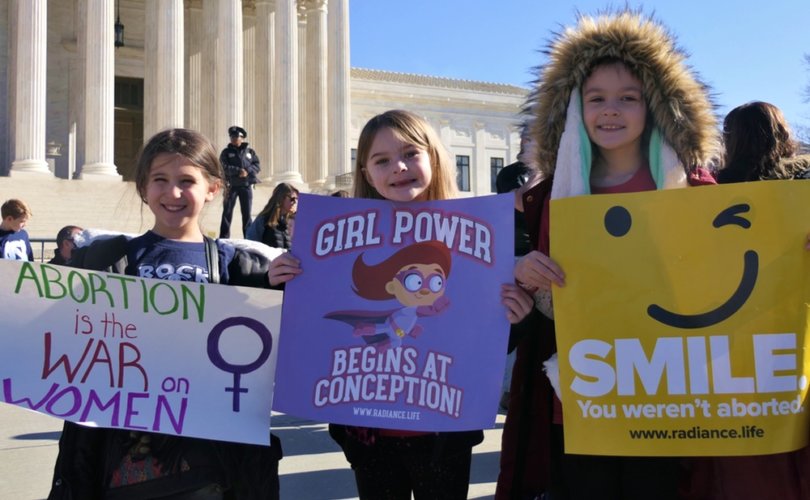 Three young women at the 2018 March for Life in Washington, D.C.Claire Chretien / LifeSiteNews

WASHINGTON DC, January 22, 2018 (LifeSiteNews) – Buoyed by the news that President Trump would speak at the 45th annual March for Life via a live video feed, the March kicked off with a filled-to-capacity conference and youth rally on Thursday.

People traveled from all corners of the country to show their support for the dignity of all human life, often at great expense and personal sacrifice. Everyone had a different story about why they attended the event.

Monica Johnson and daughter Paige trekked from Columbus, Ohio with other members of St. John Neumann parish. How did they end up in Washington, DC on the eve of the March for Life?  Paige, who is a ninth grader, explained the trip to the nation’s capital was her birthday present.

“Every life is precious and worthy,” said Paige.  “I’ve heard a lot about the pro-life movement from my Mom and at church, so I really wanted to come.  I just wanted to do something!”

Lauren Davis, also a student from Columbus, said, “I feel called to be here.  This is the best place I can be right now at this moment.  I hope I can make a difference.”

Two young men, Tim Peterson, age 31, and his friend Mason, age 28, traveled from Harrisburg, Pennsylvania to be at the March for Life.  Paraphrasing Edmund Burke, Tim said he was at the March because, “Evil prevails when good men do nothing.”  Mason quoted Psalm 127, which speaks of children as being a blessing from the Lord.

Tim said he felt so strongly about the pro-life movement that he was moved several years ago to start a clothing brand — Good Beats Evil — which features shirts with bold pro-life messages. He noted that in his company, as much work is done in-house so that donations to pro-life and pro-human dignity causes can be maximized.

“Does permitting pro-abortion politicians Communion keep abortion legal?” asked Jim Myler of Pittsburgh, Pennsylvania. Jim held high a sign bearing that same question in huge capital letters as he moved with the crowd advancing up Capitol Hill toward the Supreme Court on the day of the March.

“I’ve been a longtime advocate for the unborn and life-related issues, but have never before had the opportunity to come to the March,” said Orthodox priest, Fr. James Ellison, of St. Nicholas Church in Urbana, Illinois. “We need people to again value children.  It seems many people don’t even want children anymore, which represents a loss of hope.”

“In Scripture, fruitfulness is always celebrated, while barrenness is associated with a loss of grace,” Fr. Ellison continued. “So to deny life, or to abort lives in utero or those of the elderly,” is a clear move toward barrenness. “Yet God moves us toward life all the time.”

“This is not so much a legal issue as it is an ontological,” he added.

At the pre-March conference, youth rally, and during the March for Life the following day, “Make America Great Again” hats were spotted throughout, showing support for President Trump who many pro-life advocates say is the nation’s most accomplished pro-life president.

“Love is the foundation of the pro-life movement,” said Mancini.  “Love and sacrifice go hand in hand” and we are all “called to lead sacrificial lives for the sake of life.”

“The pregnancy care movement is the backbone of the pro-life movement,” said Mancini, adding that those centers, “Provide over one hundred million dollars ($100,000,000) in free resources” annually.

Keynote speaker Stephanie Gray urged attendees to choose the role of “defender” when it comes to life issues.

Gray began her presentation with a stirring story she learned from her former college professor: A young man, often pushed around and demeaned by school bullies, was jumped outside the school, stripped naked, placed in a large net and hoisted up a flagpole in front of the school. A crowd had gathered to watch, and one young man stepped forward attempting to defend the victim, demanding the bullies to stop. Instead, they grabbed him and did the same thing to him that they had done to the first young man.

The professor explained that he had been one of the onlookers.  There are four roles in that story:  Victim, bully, bystander, and defender.  “If I could return to that moment, you know who I would want to be? The defender.”

The seasoned international speaker conveyed in the short span of an hour how she has honed her methods for talking with those who are pro-abortion. “We must learn to use our powers of persuasion so that abortion becomes unthinkable.”

She boiled it down to three steps:  First, understand what drives abortion supporters; Second, ask, “How can we reach the mind to win the argument?” And third, discover, “How do we reach the heart,” so that we can win the person.

Kelly Rosati, Focus on the Family’s Vice President of Advocacy for Children, shared her inspiring personal testimony and was a highlight of the pre-March conference.

“I get fired up by foster care and adoption!” exclaimed the lawyer and lobbyist.  Rosati explained, I asked someone twenty years ago:  “How can I be more effective as a lobbyist?”  The surprising answer she received was, “There are many children in your own community who are left alone to languish in foster care.” Roasti took this as a challenge, and perhaps an urging from God, to put her money where her mouth is.

Since then Rosati and her husband have built their family through foster care and adoption, welcoming children with difficult medical conditions and traumatic pasts into their family.

“So if we, those committed to the sanctity of life, don’t reach out to take care of these kids, who will?” asks Rosati.  “The love that saves lives is not soft sentimentality.”

Rosati noted that many kids in foster care have experienced trauma as small children, exposed to drugs and alcohol in utero and deprivation during their young lives. As a result, “Their brains change neurologically, so it takes a particular kind of devoted parenting to care for these kids.”

“Many say, ‘Their lives would’ve been better had they never been born,’” Rosati continued.  “We have to say this is not true not only with our words, but with our lives and actions.  These kids need families!”

“It’s not about us, about whether we feel like adopting:  It’s about kids needing/wanting families,”  Rosati concluded.  “If every third church in this country had a family willing to welcome an orphaned child, there would be no more need of orphanages.

1
Dr. Simone Gold says her ‘spirits are high’ as she endures solitary confinement for entering Capitol
2
Bolivian man escapes after being buried alive in a coffin as a sacrifice to the Pachamama
3
The Atlantic downplays radical pro-abortion violence but calls the Holy Rosary ‘extremist’
4
Chicago community stands with Institute of Christ the King over Latin Mass crackdown
5
World Economic Forum adviser claims the planet no longer needs the ‘vast majority’ of the population
Subscribe to Daily Headlines »