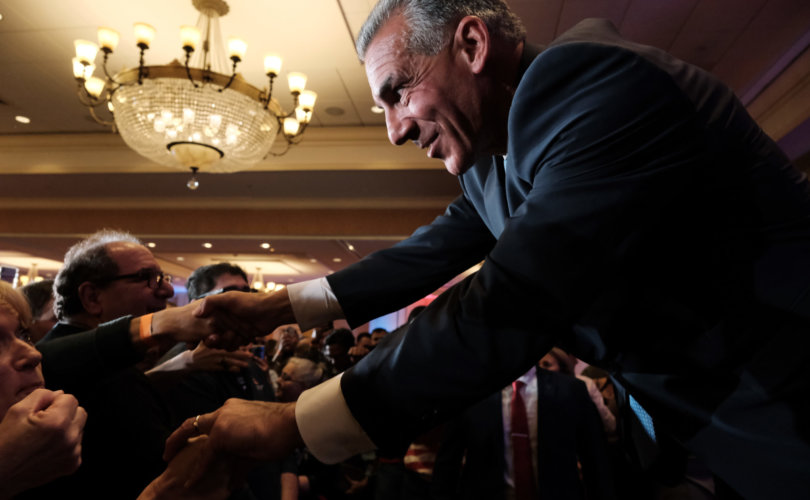 (LifeSiteNews) – New Jersey Republican Jack Ciattarelli is not conceding the state’s tight governor’s race, which has been plagued by reports of irregularities, saying that “no one should be declaring victory” with thousands of votes still uncounted.

In a video Thursday, Ciattarelli stressed that “there are still tens of thousands of vote-by-mail and provisional ballots yet to be counted.” Democratic Gov. Phil Murphy’s declaration of victory Wednesday night “was premature,” he added. “No one should be declaring victory or conceding the election until every legal vote is counted.”

“First, we’re going to allow the 21 counties to continue with the process of counting every legal vote by mail and provisional ballot that could take another week or two,” Ciattarelli continued. “If necessary, any decision on a recount or audit will come at the very end of the county process, not before.”

New Jersey law allows candidates to file a request for a recount within 17 days of an election.

Ciattarelli also called on voters to report any election irregularity to a hotline set up by the New Jersey GOP.

Time for another Jack Chat.

The Associated Press and other news outlets projected Murphy winning re-election on Wednesday, despite the remaining votes. Murphy’s lead was one percentage point at the time, and it currently stands at just around two points and 60,000 votes, with 99.83 percent of precincts reporting.

“With the candidates separated by a fraction of a percent out of 2.4 million ballots cast, it’s irresponsible of the media to make this call when the New Jersey Secretary of State doesn’t even know how many ballots are left to be counted,” Stami Williams, a spokeswoman for the Ciattarelli campaign, said in a statement.

Murphy won his first election in 2017 by 14 points and was widely predicted to sail to a easy victory a second time. Joe Biden won the solidly Democratic Garden State by almost 800,000 votes last year. Ciattarelli, an entrepreneur and former member of the New Jersey General Assembly from 2011 to 2018, defied expectations with a campaign mainly focused on education and taxes, similar to Republicans who swept Virginia’s state elections this week.

Voting machine issues ‘across the state’

Various irregularities were reported on Election Day in New Jersey, including in Essex County, where ballots were initially not counted in 56 districts due to an alleged “poll worker error.” Election workers shut down voting machines in the districts before votes could be tallied, Essex County Clerk Christopher Durkin said.

“It’s a mix, but they are mostly in Newark, in East Orange, Irvington, Maplewood, Montclair, the majority of those 56 districts,” he told News 12 New Jersey.

There will be an investigation into the incidents, Durkin said.

“Those machines are at the polling places right now,” he added. “A judge will issue an order for us to open those machines, retrieve the results and post those results.”

As of Friday, the Essex County Clerk website lists all districts reporting results.

A number of counties reported problems retrieving voting totals from machines that were turned off before the memory sticks containing those tallies was retrieved, and have to seek a court order to gain access to the electronic machines which were impounded after the election.

Poll workers in several towns in Union County did not follow the proper procedures when removing thumb drives that record each vote, resulting in delays in reporting some results of New Jersey’s super-close governor’s race and other races on election night, county officials said Wednesday.

“Some thumb drives were left in the machines by the workers, or they took them out while the machine was transferring the totals,” Union County Clerk Joanne Rajoppi said. She said that the glitch impacted 18 machines in up to five towns.

NEW JERSEY SET UP #2
Second video of a NJ voting machine that was rigged to not select Ciattarelli – how many other machines were set up like this?

NEW JERSEY SET UP
NJ voting machine – how many other machines were set up like this?
👇🤔 pic.twitter.com/hJrE00Hhv8

Technical issues related to internet connectivity were also observed across the state. In several Middlesex County towns, including South Plainfield, Old Bridge, South River, Monroe, and Edison, polling books went down the morning of the election, preventing people from casting their votes.

Just tried to vote in South River and they are having trouble accessing county databases. Turning people away. @brian4NY

@Jack4NJ It took an hour to vote at my polling location due to “Wi-fi” issues. The Board of Elections told poll workers they were not able to use the Emergency Ballots. Old Bridge and West Windsor both had “Wi-fi” issues. How does that not constitute an emergency…

Thirteen of 15 polling districts in South Plainfield were inoperable for several hours, according to local news. The state’s electronic pollbooks, introduced this cycle as part of a new $68 million polling system, reportedly had problems connecting to the internet. A Middlesex County official explained in a statement reported by mycentraljersey.com: “The issues were mainly due to connectivity challenges with the routers which were provided to the County by the State of New Jersey.”

“These state-issued devices are intended to connect the electronic poll books to the Statewide Voter Registration System (SVRS). It appears that these issues were not isolated to Middlesex County but were happening across the state,” the official said.

Similar glitches impacted voters in Passaic and Somerset counties, as well as in the city of Paterson.

Some commentators have also pointed to a late-night vote dump that gave Gov. Murphy an additional 40,000 votes in Bergen County after all 100 percent of precincts were already reporting. Election officials have said that the initial vote count in Bergen County did not reflect mail-in ballots.

The RNC lawyers need to investigate why Bergen County New Jersey after 100% reported with Ciattarelli having won 52% to 47% all of a sudden flipped to Murphy 51% – Ciattarelli 47%.

Irregularities in New Jersey’s all mail-in 2020 election were widely reported last year, and in one case ended with two Paterson city councilmen being indicted for fraud for attempting to rig a special election.

“The attorney general began probing irregularities in Paterson after U.S. Postal Service inspectors reported finding hundreds of mail-in ballots stuffed in mailboxes. The county elections board rejected over 800 Paterson ballots, and a New Jersey judge later invalidated the results of the race,” LifeSiteNews reported in March.