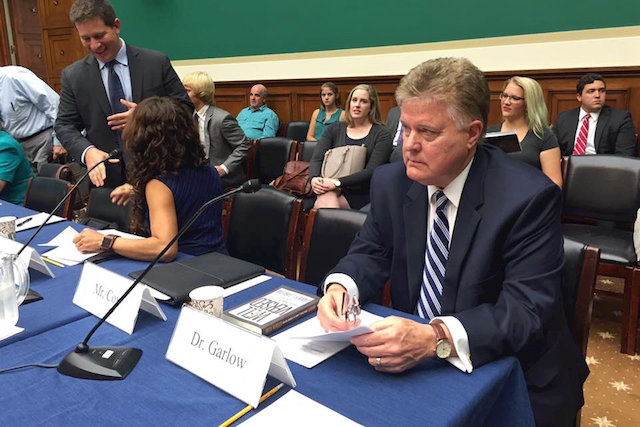 "We have tough battles here, but they are winnable to the extent that we will follow the word of God," Pastor Jim Garlow says.Photo courtesy of Josh Shepherd

July 22, 2016 (Daily Signal) — Seated in the House gallery, one man watched the vote on the Conscience Protection Act with all the intensity of a general going into war.

On July 13, the U.S. House of Representatives passed the bill, which intended to protect the rights of health care providers, churches, and other groups that object to participating in abortion.

Jim Garlow, father of eight children and pastor of Skyline Wesleyan Church in San Diego, California, sat with his wife and a dozen congregants who prayed and discussed events unfolding on the House floor. While others visit the nation’s capital city for summer vacation, this team came with purpose.

Nearly two years ago, Garlow was thrust into a battle with the state of California when his church objected to a new state mandate involving abortion. Since then, he has found that pro-choice bias in state and federal government is no casual affair.

“They are ruthless,” Garlow says.

Yet his church refuses to bow to the state. Represented by Alliance Defending Freedom, its lawsuit against California is ongoing.

In an interview with Bound4LIFE—a faith-based, pro-life organization—following the vote, Garlow discusses how he testified before Congress, his personal connection to life issues, and the covert strategy he sees at work in politics today.

Bound4LIFE: What recent events in California led your church to file a lawsuit against the state to defend your pro-life convictions?

Garlow: On August 22, 2014, some nameless, faceless bureaucrat at the Department of Managed Health Care in Sacramento made a decision by fiat: that every insurance provider in the state of California had to include elective abortion in our plans.

I found out about that decision 60 days later. An attorney who assists us at Skyline Church said, ‘You’re now covering abortions in your insurance.’ I said, ‘There’s no way.’ ‘No, you are.’ ‘Surely not—we would’ve been notified or something! We would’ve seen this in the media?’ I asked our team to follow-up about it and that attorney was right. We were being forced to pay for abortions, and in fact everyone in California is.

We began to ask what we could do—what is our legal recourse? There were many conference calls. We appealed directly to Kathleen Sebelius, secretary of the Department of Health and Human Services at the time. She stalled our inquiry forever and did nothing. HHS would not enforce the law as written, which protects our rights.

A number of churches, hospitals, as well as Christian universities, both evangelical and Catholic, filed a complaint against the federal government. On June 22, a federal agency dismissed that coalition complaint. Our church filed a separate lawsuit against the state of California in a federal court, which is currently ongoing.

Bound4LIFE: Are there specific policies already enacted that protect medical professionals—or any citizens—who do not want to be involved in abortion?

Garlow: If you’re an OB-GYN doctor or a nurse, and you refuse to perform an abortion, there are several federal statutes that protect you. The Hyde Amendment is the most well-known, prohibiting federal funding of abortion. There’s the Church Amendments—not named for “church,” like a congregation; it refers to Frank Church, former senator from Idaho.

There’s also the Coats-Snowe Amendment, named for Dan Coats and Olympia Snowe. They are two people on opposite sides of the abortion issue, but they agreed that people should not be coerced to be involved in abortion.

But the Weldon Amendment, named after Congressman Dave Weldon who is a medical doctor, is the most relevant. The Obama administration has twisted the Weldon Amendment in such a way that, if any medical professional objected to providing abortions, they can be fired with no right to litigation.

It’s bizarre. When the law is violated, people always have the right to sue—but now none of these people could. On top of that, churches are also coerced to cover abortions.

I testified this past Friday before the Energy and Commerce Committee—their subcommittee on Health, chaired by Congressman Joe Pitts of Pennsylvania. I flew home, preached in San Diego, then flew back here Monday to speak to congressional staff about this issue—60 key people influencing their bosses, who are members of Congress.

We’ve been in meetings one after another with congressmen, specifically bringing up the Conscience Protection Act and how it helps correct these issues. I also have a new book called ‘Well Versed: Biblical Answers to Today’s Tough Issues;’ a team from Skyline Church came as volunteers and hand-delivered copies to all 535 members of Congress. They believe the message is that important.

Bound4LIFE: Now the vote just ended on this bill, how does it correct the issue of government discrimination against medical providers and churches like yours?

Garlow: We had a victory moments ago, when the Conscience Protection Act passed by a bipartisan majority vote of 245-182 in the U.S. House. Our team was seated in the House gallery praying. Now it will proceed to the U.S. Senate, where it will hopefully be voted on this fall.

This week, I’ve been sitting with attorneys who’ve been using all this legalese—some of which I did not follow, quite frankly. Let me approach the specifics in layman’s terms. This bill tightens the screws down on these amendments already enacted. It gets rid of this notion that you cannot sue if you’re coerced into providing an abortion. That’s the quick and easy way of understanding it.

This bill would take out the language where they twisted the Weldon Amendment to mean something different. The Obama administration released a statement last night saying the president would most certainly veto this bill if it arrives at his desk because it would ‘limit women’s health care.’

They attempt these three levels every time: toleration, affirmation, participation. They are ruthless. They have no respect for the First Amendment rights of the Constitution.

Bound4LIFE: For someone who does not hold pro-life convictions, why should they support this bill?

Garlow: Tonight, we had three Democratic members join the majority in voting for this bill. Now the Democratic Party, according to its platform, is unashamedly pro-choice—I would call it pro-abortion, to be honest.

Many leaders mentioned earlier who wrote these amendments, such as Senator Frank Church, were Democrats who said that a person’s conscience should not be violated. There’s been a fair amount of bipartisan support for conscience rights, because this policy is not fundamentally about the issue of abortion.

Rather, it addresses: Is the First Amendment going to be respected? That question is on two levels. On one level, there are those of us who uphold the sanctity of life based on biblical reasons—we can point to chapter and verse, as well as church doctrine.

On a second level, there are atheists who object to abortion and they don’t have to give a theological reason for that. It’s a matter of conscience for them, period. No one should be forced to do something they find offensive.

This was emphasized strongly in the Energy and Commerce subcommittee forum. Two of us testifying were pastors, while two others were conscientious objectors whose stand for life was not tied to theological reasons. No American should be forced to participate in abortion.

Bound4LIFE: You noted your role as a pastor. Sometimes speaking of the value of every life seems distant or political to people. How does Skyline Church live out your pro-life beliefs?

Garlow: It concerns me that we live in a culture where people wonder, ‘Why should we care about a pro-life position?’ How ludicrous is that! The average person uses the word ‘abortion’ with far too much ease. When I was in front of the congressional committee, I said, ‘Let’s call it what it is: Abortion is dismembering a human being, ripping them to shreds. Innocent blood is flowing in the streets of our cities.’

At Skyline Church, we are activists. We hold accountable those in public life. We also adopt babies—I’ve adopted four myself. One of my adopted children is an adult now, who has adopted children. My wife passed away a number of years ago and I remarried, then I had stepchildren; one of my grandchildren is adopted.

My daughter-in-law, whom I claim as my own, runs an adoption ministry. So she’s standing for life full time on the frontlines. Some of our congregation goes out to abortion centers for the purpose of praying and reaching out in compassion. When I pastored in the Dallas/Fort Worth area, I was heavily involved on that important front.

Bound4LIFE: You mention Texas, which was at the center of a recent Supreme Court decision seen as a setback for the pro-life movement. Do you have hope as a pro-life pastor?

Garlow: I do have hope. The pro-life movement is very encouraging to me as a pastor. How we’re seeing the next generation take a stand against abortion is thrilling.

I have a cautious optimism, built on whether this nation has a critical mass of people who are willing to repent of sin, hold leaders accountable, and refuse to tolerate the kind of actions we’ve seen going on. We have tough battles here, but they are winnable to the extent that we will follow the word of God.

Reprinted with permission from The Daily Signal .

This article has been corrected to reflect that it is one of Garlow’s grandchildren, not stepchildren, who is adopted.