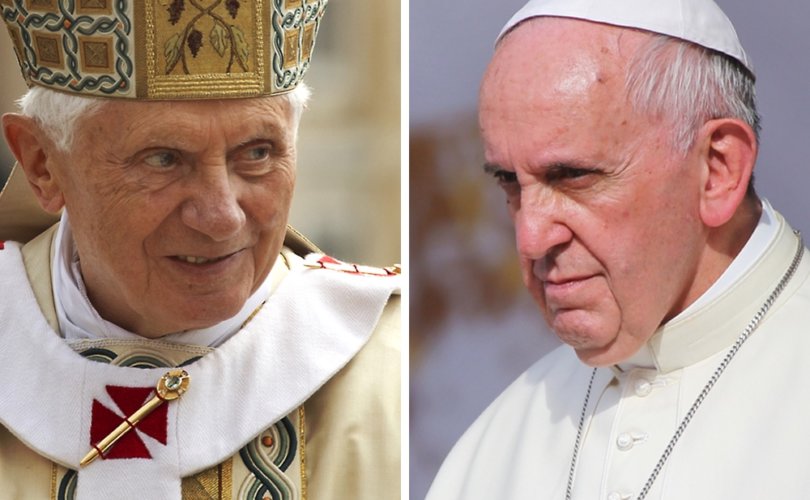 ROME, Italy, July 4, 2019 (LifeSiteNews) ― Several media outlets around the world have reported that Benedict XVI asserted in a recent interview that Pope Francis “is the one pope,” but there is no evidence for this in the actual interview.

The interview, which first appeared in the print edition of the magazine on June 30, is also available online.

The actual paragraph in which the phrases can be found does not seem to be a direct quotation from Benedict XVI but a suggestion by the interviewer of what the Pope Emeritus says to Francis’ critics.

Found on page 28, the paragraph has been recently translated for LifeSiteNews by Diane Montagna. Purporting to describe the six years of Benedict’s retirement in Vatican City, Franco wrote:

“When the history of these hidden years in Mater Ecclesia is written, it must not leave out the confidential visits from cardinals and bishops who knocked at the door looking for reassurance and voiced their criticisms and perplexity about the current pontificate. And one will discover how much was done to avoid lacerations. Bergoglio’s adversaries, who are often conservatives desperately searching for a word from Benedict that sounds like a criticism of Bergoglio, have invariably heard the response that ‘the Pope is one, it is Francis.’”

A trusted source told LifeSiteNews yesterday that Franco is refusing to confirm that the Pope Emeritus really did say those words.

In April 2019, following Benedict’s surprise statement about the clerical sex abuse crisis, Cardinal Gerhardt Müller made an assertion very close to the one Franco claimed for Benedict. Müller, a former prefect for the Congregation for the Doctrine of the Faith, said that it was not possible for a “true Catholic” to oppose Benedict XVI and Francis.

“I must refuse absolutely this false game of opposing the two people: we have now only one Pope who is Francis, and Benedict is not the pope anymore,” the Cardinal told television interviewer Fabio Marchese Ragona on April 13, 2019 (at 13:24).

The Corriere della Sera ran an advertising campaign for Franco’s interview with Benedict XVI prior to its publication in Sette magazine. However, in reality, expectations were dashed as Franco provided very little by way of direct quotations from the retired pontiff. It is unclear from the text that Benedict knew that he was participating in an interview; the pontiff’s most revelatory statement is that he prefers Italian holidays to Italian politics. Most of the article describes the visual details the journalist noticed in his outdoor meeting with Benedict, the retired pontiff’s day-to-day life, and Benedict’s amusement when given a cartoon of himself by cartoonist Emilio Giannelli, whom Franco said accompanied him to the interview.

On June 27, the Italian version of Vatican News, anticipating Franco’s interview, seemed to suggest that the Pope Emeritus had said “the pope is one, Francis” to the Corriere della Sera reporter.