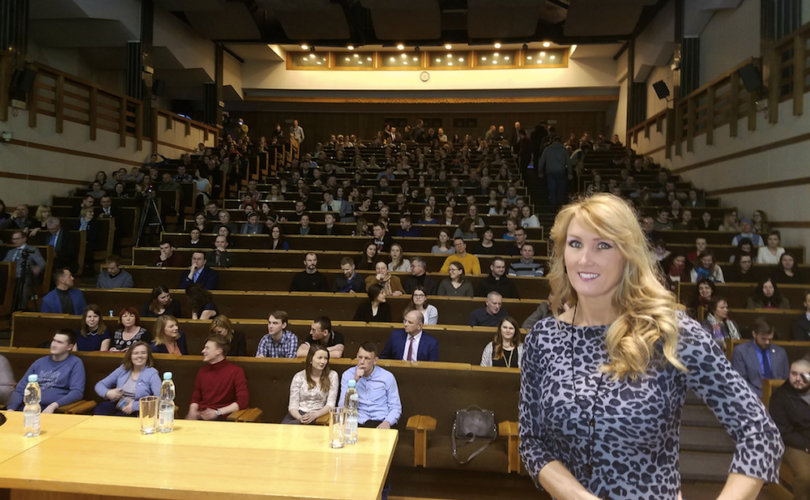 WARSAW, Poland, March 17, 2017 (LifeSiteNews) — Four universities were pressured by the radical left this week to cancel talks by American pro-life speaker Rebecca Kiessling, forcing organizers to move her presentations to alternate locations during a speaking tour in Poland.

Ultimately, however, these intimidation tactics backfired.

The Polish legal organization Ordo Iuris Institute for Legal Culture invited Kiessling to speak, primarily in university towns. Kiessling is an American mother and lawyer who was conceived in rape.

The plan was to meet students, journalists, politicians and pro-life activists. Kiessling wrote on her Facebook page that she came “to speak on behalf of #OrdoIuris efforts to remove #RapeException from the 1993 law.”

Joanna Zając of Ordo Iuris explained to LifeSiteNews that Kiessling was scheduled to speak at four public universities, in Warsaw, Wrocław, Toruń and Krakow, but all were cancelled after protests by left-wing activists, including the radical Together party. Warsaw University backed down because the event “promoted specific beliefs and was not an academic discussion.”

The organizers agreed to change the format of the event from a lecture to a discussion and still hoped Kiessling would be able to speak at the university. In other cases, the organizers simply moved the event somewhere else.

The only university that did not succumb to the pressure was the Catholic University in Lublin, where Kiessling’s appearance went as planned. It can be viewed here.

“I've never had a speech cancelled in the United States,” she explained.

In Canada, it happened once, but the community college “quickly rescheduled the event with an apology for the mix-up,” Kiessling told LifeSiteNews.

Minister of Science and Higher Education Jarosław Gowin called the actions of Polish institutions of higher learning “censorship.” In a statement released on the government website, he supported the right to free speech, particularly Kiessling’s right to speak on University campuses throughout Poland. She was “absolutely thrilled” by his statement.

Kiessling said in a video that she was not surprised to see “bullies who wanted to silence her,” but she was surprised that the universities cancelled the event.

Kiessling, a mother of five, thanked the protesters because they helped her “reach far more people with all the media attention.” She told LifeSiteNews that she is very pleased that several other universities stepped up to have her speak when the others cancelled. The turnout at those events was phenomenal.

“I feel like I should be sending a basket of fruit or bouquet of flowers to those who protested having me speak because my story has reached far more people than it would have ever reached if I was merely speaking at a university,” Kiessling said.

Visiting Poland for the first time, she told wpolityce.pl that her grandmother, whom she credits for teaching her about pro-life issues, came to the United States from the Polish region of Galicia, when her family fled the Nazi occupation of the country.

She has had almost non-stop media interviews and a full schedule while in the country. At the end of her first day in Poland, her story was covered in more than 100 Polish newspapers.

Some of the attention has been negative. Someone on Facebook threatened to break her legs.

“Hopefully, you will be hearing from the police soon,” she joked. “Nice try scaring me, but I will not be silenced and I will not live in fear.”

Mariusz Dzierżawski of Right to Life Foundation saw Kiessling speak at the Polish Parliament. He told LifeSiteNews that “her testimony is very compelling, very emotional and personal but not overly melodramatic.” He added that thanks to her, his determination to fight for the right to live grew even more.

Indeed, Kiessling’s story of rape and adoption is shocking and persuasive. She was conceived when her mother was brutally assaulted at knife-point by a stranger, a serial rapist. Given away for adoption, she learned about her past when she was 18. Kiessling’s biological mother admitted to her that she would have aborted her had abortion been legal at the time.

Kiessling’s experiences taught her the importance of legal protection for the unborn. That’s why she has been fighting to eliminate the rape exception. She created an organization “Save the1” that helps sexual assault victims and those conceived in rape. Her work changed her mother’s mind on the topic, as well as that of former Texas governor Rick Perry.

Despite the cancellations, Kiessling has already had an impact in Poland. She wrote on her Facebook page that after speaking at the Catholic University in Lublin, one female student came up to her to tell her that she changed her mind about abortion. The packed auditorium gave Kiessling a standing ovation at the end of her speech, and only five people had showed up to protest beforehand.

”It was a great success,” Kiessling wrote.