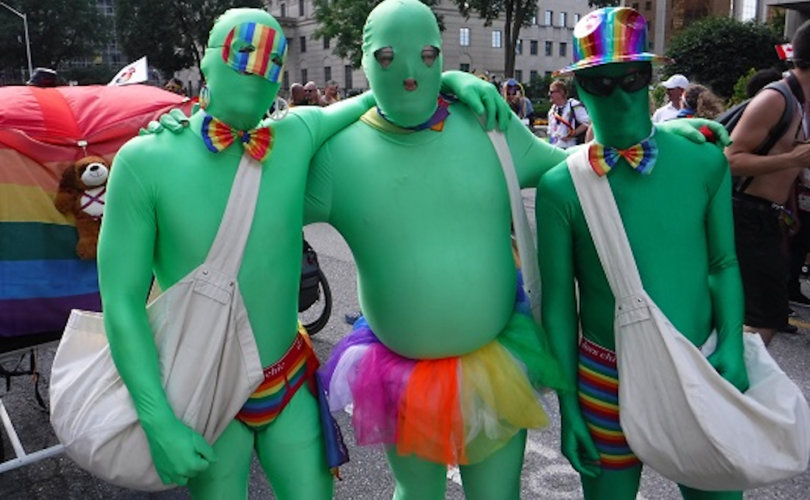 TORONTO, February 14, 2017 (LifeSiteNews) – An Ontario judge reserved judgment after a motions hearing last week on the $104 million lawsuit against Bill Whatcott and others who marched in the 2016 Toronto Pride Parade disguised as “gay zombies” to distribute fliers on the spiritual and physical dangers of homosexuality.

Whatcott’s lawyers, Charles Lugosi and John Findlay, argued in front of Ontario Superior Court Justice Paul Perell on February 8-9 that the lawsuit is a “SLAPP” or “strategic lawsuit against public participation,” which has no legal merit, is an abuse of process and should be dismissed.

Lugosi and Findlay also argued that the Toronto Pride Parade is a political, government-promoted event. Thus, the actions of Whatcott and the “gay zombies” are protected by Charter rights of freedom of speech and assembly.

LGBTQ activist lawyer Douglas Elliott and Scott Fairley of Cambridge LLP argued on behalf of the plaintiffs for an order forcing Whatcott to disclose the identities of his fellow “gay zombies” and anyone who helped him financially.

The lawsuit claims Whatcott and defendants engaged in a civil conspiracy to harm, that they defamed and that they intended to inflict “mental distress” on members of three classes: the estimated 500,000 marchers in the Pride Parade, 9,000 recipients of the leaflets, and a subclass of 500 members of the Liberal party.

The lawsuit has not yet been certified as a class action.

Elliott and Fairley applied in November for a court order to force Whatcott to identify his alleged co-conspirators, at which point Lugosi and Findlay filed counter-motions to dismiss the action. Perell scheduled two days to hear arguments from both sides.

The plaintiffs’ factum alleges Whatcott was the “mastermind” behind a civil conspiracy “to injure, embarrass, intimidate and promote hatred against the plaintiffs,” and that “there is no right to conceal the identities of co-conspirators to an unlawful conspiracy.”

Hudspeth noted during an August 12, 2016, press conference that he wanted to “smoke out” all those who abetted Whatcott. Smitherman stated that he joined the lawsuit to “do all we can to stamp this hateful individual out.”

It is not disputed that Whatcott, a Christian now based in Vancouver and well known for previous campaigns against homosexuality, registered the Gay Zombies Cannabis Consumers Association in the Toronto Pride Parade under the assumed name Robert Clinton. Nor did Whatcott submit his leaflets for vetting as requested by Pride Parade regulations.

He told LifeSiteNews in an earlier interview that “our delivery was a bit creative, but we wanted to give people this message because it is truthful.”

The flier has since been removed from Whatcott’s website Free North America pending the resolution of the legal action.

Hate speech or not?

Elliott and Fairley argued that Charter guarantees of freedom of speech and assembly do not apply because the Pride Parade is not a government event and in any case Whatcott’s leaflet is prima facie hate speech.

They wrote in their factum the Supreme Court ruled unanimously in 2013 that two pamphlets Whatcott dropped door-to-door in Saskatoon and Regina alleging the province’s public schools promoted homosexuality were “hate speech.”

They described Whatcott as a “notorious scofflaw” who defied the Supreme Court ruling to hand out “offensive anti-gay literature” that “promulgated hatred towards members of the LGBT community.”

But Lugosi and Findlay argued that a “reasonable person” would conclude there “is nothing hateful in [Whatcott’s] message at all,” and that it is protected by the Charter right to freedom of expression.

“Instituting a class action for the intentional infliction of mental distress in this case overlooks the constitutional right to engage in mature debate in a public forum where the search for the truth in the pursuit of the public good may hurt feelings of individuals,” they wrote in their amended factum.

“This is the price that Canadians must pay to live in a constitutional democracy where dissent and freedom of political expression is not just tolerated but encouraged, as vital to the strength, health and survival of a just and responsible society.”

Lugosi and Findlay argued the Supreme Court ruling was irrelevant, as it dealt with different legal issues and parties and “focused on the promotion of homosexuality in public schools.”

The “core message in the instance case focuses on the political alliance between the governing Liberal parties of Canada and Ontario and the LGBT subculture and their mutual political agenda,” they wrote in their reply factum.

Moreover, Toronto taxpayers bankrolled the public celebration of the LGBTQ2SI lifestyles to the tune of $729,364.40 in city services. The City of Toronto contributed a further cultural grant of  $260,000.

Liberal Prime Minister Justin Trudeau’s participation as the “lead attraction” was further evidence the July 3 parade was a political event. Trudeau is the first sitting prime minister to march in a Pride Parade.

Ontario Premier Kathleen Wynne, a lesbian, marched in the Pride Parade, along with a large contingent of Liberals, noted the defendants’ reply factum.

Lugosi and Findlay argued Ontario law does not allow defamation as a class action and that plaintiffs did not prove the harm done by not proceeding with the lawsuit would outweigh the public interest in protecting free speech and assembly.

“The government may not use civil suits in defamation, directly or indirectly, to silence its political opponents,” they wrote.

The graphic leaflet was “a critical exposition of conflicts of interest with respect to individual members of the federal and provincial Liberal parties” and contains “no personal attack on the reputation of any one individual,” Whatcott’s lawyers argued.

The factum notes: “The message alleges that both Levin and Lynne collaborated to change the sexual education curriculum of elementary school students at an early age in an attempt to teach and influence these children that the LGBT lifestyle is normal and acceptable.”

The factum notes that “the message conveyed by these excerpts is the same as the statistical information content on public websites such as the Centers for Disease control and prevention.”

The flier also stated that “homosexuality is incompatible with human nature. Disease, death and confusion are the sad and sordid realities of the homosexual lifestyle.”

Whatcott contends the leaflet is truthful and is “designed to warn people to encourage members of the LGBT subculture to choose a healthier lifestyle more pleasing to God.”

Whatcott himself a victim of hate speech?

Lugosi and Findlay also pointed out that the plaintiffs’ factum vilified Whatcott as “unrepentant villain who is detestable for his persistent efforts to disperse his message.”

They wrote: “It is ironic that Whatcott might be the victim of what might be characterized as hate speech cloaked in legal proceedings.”

Toronto Pride Parade organizers had other means to penalize Whatcott, they pointed out.

Whatcott used a similar modus operandi in 2014 when he marched in the Vancouver Pride Parade as a member of the nonexistent Calgary Church of the Flying Spaghetti Monster to hand out leaflets.

In his 2014 autobiography, “Born in a Graveyard,” Whatcott narrated that he was the victim of a prison homosexual rape, and had on one occasion prostituted himself to pay for drugs. He is now motivated by his concern for others caught up in homosexuality.

Whatcott told LifeSiteNews in an earlier interview that he would rather spend his life in jail than disclose the names of anyone who helped him in the “gay zombie” caper.