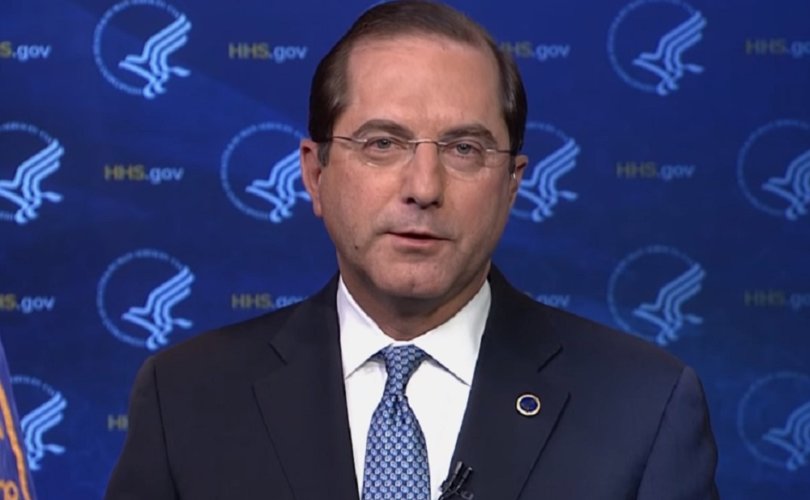 However, that won’t stop relentless international lobbying to secure this illusory right, Azar warned representatives of 35 “like-minded” countries who met at Washington’s historic Blair House to discuss their continuing efforts as a “pro-life, pro-family, pro-sovereignty coalition” on the global stage.

“I am sure you are all familiar with the constant drumbeat in the halls of the United Nations and the WHO (World Health Organization) to normalize the terms ‘sexual and reproductive health’ and ‘reproductive rights,’” said Azar, according to a transcript of his remarks on the HHS site.

“What reproductive rights are they talking about? In this context, it is increasingly becoming clear that some U.N. agencies and countries want this to mean unfettered access to abortion, and we cannot let this threat go unanswered,” he said.

President Donald Trump “has been clear, at the U.N. and on the world stage: Health care exists to improve health and preserve human life — the universal goal we all share,” he added.

Azar warned the gathering that the sovereignty of nations is at stake in the global struggle.

“Every country has the right, and the duty to its own citizens, to decide for themselves how laws and policies can best strengthen the family, ensure optimal health for women and adolescents throughout their lifespan, and protect the unborn,” he stressed.

While abortion laws in the United States “are some of the world's most liberal,” the Trump administration “has worked extremely hard to provide better protections for the unborn in the United States, and we do so working through our own legislative and legal systems,” added the HHS secretary.

“There is no role in this debate for interference from U.N. agencies or other countries.”

Azar thanked those nations who have joined the United States in the fight to “protect the lives of the most vulnerable, to defend the important role of the family, and parents in particular, in the health and well-being of their children, and to respect national sovereignty.”

In the last year, a total of 24 countries that “are home to well over one billion human beings,” signed on to one or more of the joint statements to the U.N. in defense of life, he said.

“Individually, we can raise our own voices, but together, we are much stronger and have the ability to change the debate,” observed Azar.

“Thank you for taking a courageous stand with us for the unborn. Thank you for standing up for the idea that every life has value. And thank you for making clear that national sovereignty is not a vague or old-fashioned concept, but the most important duty for each of us as leaders in our respective governments,” he told participants.

“Together, we built a pro-life, pro-family, pro-sovereignty coalition that is a force to be reckoned with. But our informal coalition needs to grow and be more active. We cannot stand still, because we have much work to do in 2020 and beyond.”

Upcoming events where “the vital issues I mentioned will be debated” include the WHO board meeting in Geneva, the Status of Women Commission meeting at the U.N. in New York, the World Health Assembly in Geneva, and the U.N. General Assembly, he said.

Azar invited those gathered to a global women’s health conference on May 16 in Geneva, just before the World Health Assembly.

Hungary Minister of State for Family and Youth Affairs Katalin Novák and Brazil Deputy Chief of Mission in Washington Fernando Pimentel also addressed the meeting, and Azar read a letter from Dr. Jane Aceng, Minister of Health of Uganda, “who is one of our strongest and most reliable partners” but was unable to attend.