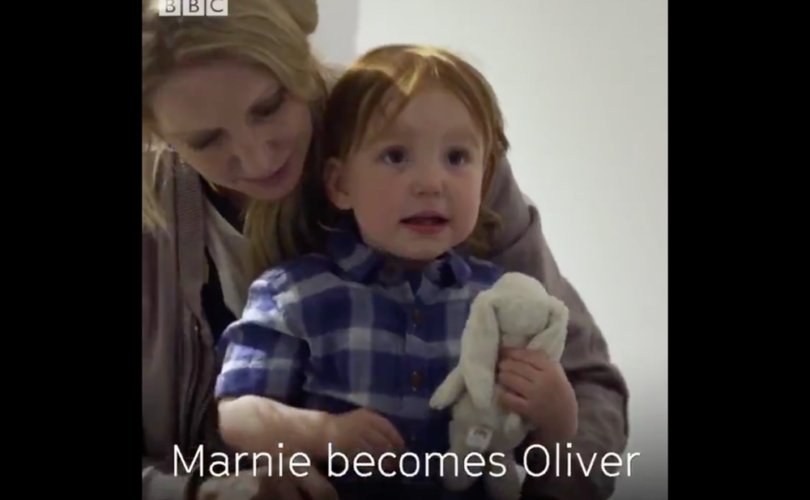 UNITED KINGDOM, July 31, 2018 (LifeSiteNews) – A video recently shared by the BBC purports to shame adults for “gender-stereotyp[ing]” children and suggests that distinctions between boys and girls should be erased entirely.

The video, tweeted over the weekend, highlights an experiment in which a male or female baby is dressed in clothes opposite to the baby's sex, a mat full of toys is laid out, and a series of adult volunteers are filmed playing with the babies. The adults are not told of the experiment, and led to believe Edward is actually “Sophie” and Marnie is actually “Oliver.” The video is clipped from a program featuring Dr. Javid Abdelmoneim and is titled: “No more boys and girls: Can our kids go gender free?”

The adults pick out dolls and plush toys for the child they think is a girl, and robots and cars for the perceived boy.

The BBC suggests that “stereotyped” toys will disadvantage girls later in life, noting that men “hugely dominate careers prizing maths, spatial awareness, and physical confidence” — attributes ostensibly reinforced by “male” toys. The video does not identify what boys are supposed to gain from girls’ toys.

“Are boys born ‘better’ at these? Is it nature or is it nurture?” the video asks. “When children play spatial awareness games frequently their brains change physically within just three months.”

Despite the video coming down confidently on “nurture” as the answer, declaring the adult volunteers to have shown “bias” toward the kids, the actual footage seems to support their original intuitions, with Edward and Marine showing little interest in toys meant for “Sophie and Oliver.”

Nevertheless, the volunteers expressed guilt for acting on “stereotypes.”

“I thought that I was somebody that had a really open mind,” one said. Another echoed the sentiment, saying she “always thought I was rather more open-minded than that, and I would think that these are children’s toys, whatever the gender.”

“It will make me think, the next time I’m with a child, like my niece or my nephew, to make sure that I am actually being fair and equal with all of them,” another said. “And just giving each child an opportunity to just be whoever they are.”

The tweet promoting the video featured the hashtag #NoMoreBoysAndGirls.

“Adults in their insanity are messing around with gender and we have 50 years of proof this madness results in anxiety, depression, and too many suicides,” author and public speaker Walt Heyer told LifeSiteNews. Heyer is a former transgender who now operates a ministry to help gender-confused people come to terms with their God-given identity.

“This is psychological child abuse, and no kid should be subjected to this indoctrination of gender confusion period,” he continued. “Dr. [John] Money did this over 50 years ago and dead kids was the outcome.” Money was a psychologist considered to be a co-founder of the modern transgender movement.

The video quickly garnered widespread ridicule. “No matter how hard toy companies and gender-neutral advocates try to make children abandon the toys they are drawn to, girls will still take a stuffed animal and tuck it into a carriage with a blanket and a bottle,” wrote the Washington Examiner’s Nicole Russell, a mother of two boys and two girls. “Boys will still prop that same animal up on a chair so they can ‘shoot’ it down with a Nerf gun.”

Russell noted that her kids naturally gravitated toward the toys and activities associated with their gender, despite having plenty of both in the house, and highlighted a November 2017 study which found that the “consistency in finding sex differences in children's preferences for toys typed to their own gender indicates the strength of this phenomenon and the likelihood that has a biological origin.”

“This shouldn’t be shocking,” Ben Shapiro adds at National Review. “Even rhesus monkeys differentiate toy preference by sex. And the patriarchy among rhesus monkeys is difficult to chalk up to gender stereotyping.”

At The Federalist, David Marcus argued that the story proved that slippery-slope warnings once mocked by liberals were correct after all, and warned that the BBC was playing with forces it didn’t truly understand.

“Boys will be girls, girls will be boys. It’s all just a cultural construct anyway, so why not construct new ones?” he wrote. “But construction is hard. The traditional concepts we have of sex-driven gender roles took tens of thousands of years to come into being. This new idea, that biology and gender have nothing to do with each other, is a novelty being tested on kids who really can’t consent to the experiment.”

Westmonster compiled a string of reactions deriding the segment, as well, including a condemnation from UKIP Assembly group leader Peter Whittle.

This is not a spoof. The @BBC is using your money to produce this stuff. Compliant adults overseen by an ‘expert’ showing them the error of their ways. Pure cultural Marxism: shake people’s confidence in order to break down further the hated ‘norms.’
Scrap it once and for all https://t.co/3AreSfsFWd

The BBC has finally lost the plot #socialengineering

A variety of scientific literature indicates that promoting gender fluidity within children’s minds is unnecessary and destructive. Studies indicate that between 80-90% of children experiencing gender dysphoria outgrow it on their own by late adolescence, and that even full gender reassignment surgery often fails to resolve gender-confused individuals’ heightened tendency to engage in self-harm and suicide.