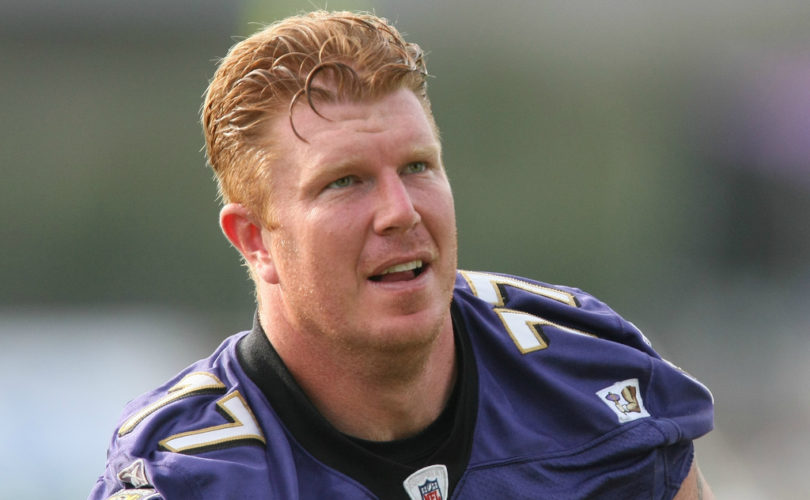 Matt Birk, the former center for the Minnesota Vikings and the Baltimore Ravens, proclaimed his support for women and unborn children this afternoon from the frosty dais of the March for Life.

“We march, because I've never heard a woman give birth to a baby and say, 'I wish I had an abortion.' That is why we march,” he said.

“I've never heard of a worker at a life clinic who decided to go work at an abortion clinic. That is why we march,” he said.

Two of the women who shared the platform with him – speaker Jewels Green and Catherine Adair of Silent No More – formerly worked at abortion facilities, but they now hold signs proclaiming, “I Regret Providing Abortions.”

Until Live Action and the Center for Medical Progress began releasing undercover videos of Planned Parenthood, most public knowledge about the inner workings of the abortion industry came from former industry workers like the late Dr. Bernard Nathanson. Many them said they only fled the workplace after being deeply scarred by what they had witnessed.

Two years later, Dr. Anthony Levatino told lawmakers about the realities of second-trimester abortion alongside Jill Stanek, a former nurse who exposed abortion inside a nominally Christian hospital in Illinois.

Birk, who earned a degree in economics from Harvard, called grieving mothers recovering from an aborton “the real heroes” of the pro-life movement. “We love them, and we appreciate them,” he said.

He also struck upon contemporary controversies, saying, “If black lives matter, lives in the womb matter.”

That may have been intended as a commentary on progressive pro-life Christian Ron Sider's speech yesterday morning at the first annual Evangelicals for Life event. Sider said that independent Christians should support the Black Lives Matter movement, labeling it a pro-life cause.

But then, Birk has never been one to avoid a collision if necessary.

When the Ravens won the Super Bowl in 2013, he declined to meet President Barack Obama with his teammates, due to the president's strident views in support of abortion.

“I have great respect for the office of the presidency, but about five or six weeks ago, our president made a comment in a speech and he said, 'God bless Planned Parenthood,'” he explained. “Planned Parenthood performs about 330,000 abortions a year.”

“I am Catholic. I am active in the pro-life movement, and I just felt like I couldn't deal with that,” Birk said. “I couldn't endorse that in any way.”

Since retiring from the gridiron, the 39-year-old has served as the director of football development for the NFL.