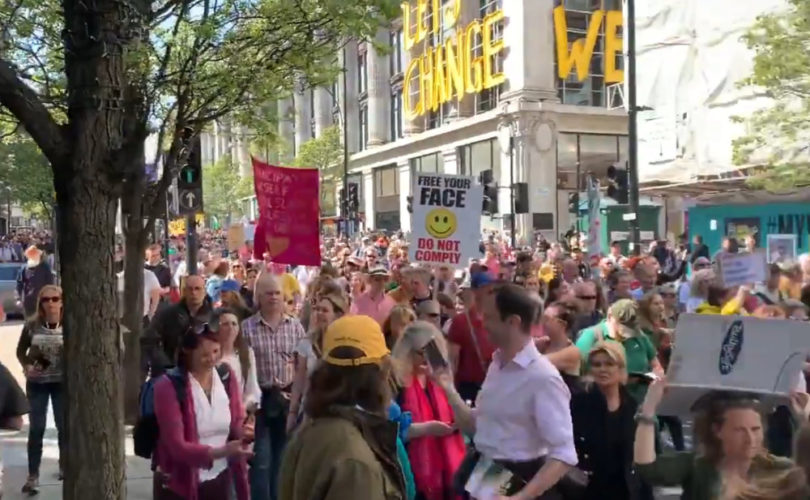 Rally against lockdowns and vaccine passports in London, April 24, 2021We Will Be Free / Twitter

UPDATE, April 28, 1:05 p.m.: This article has been updated to reflect accounts of a far larger crowd size than initially reported by the mainstream media.

LONDON, U.K., April 27, 2021 (LifeSiteNews) — Hundreds of thousands gathered in London over the weekend to protest the British government’s COVID-19 restrictions, in what was one of the largest public demonstrations in the U.K. in months.

The rally, called “Unite for Freedom” and “March for Freedom,” drew an estimated 100,000 or more people who packed London streets on Saturday to denounce vaccine passports, lockdowns, and other coronavirus measures.

Despite the reported figures of mere “thousands” or 10,000 marchers from the pro-lockdown mainstream media, several commentators and journalists present at the protest declared that there were well over 100,000 people present.

They were supported by video clips showing the significance of the crowd size, and Daily Expose even described the event as “possibly the largest protest the United Kingdom has ever seen.”

Oxford Street, London – The March for Freedom is Massive pic.twitter.com/KAiMOKWBSK

Protesters marched to the Houses of Parliament with signs that read “the people refuse your totalitarian stage agenda,” “lockdowns kill,” and “no new normal.”

“They did not isolate a virus. They isolated you,” one demonstrator’s sign said. Other protesters shouted slogans like “take off your mask,” “save our rights,” and “COVID-1984.”

Hundreds of thousands of people have come together to show the government we will not be silenced, locked up or lied to anymore.#londonprotest pic.twitter.com/zO1ko8ro0Y

“Do you know that you have been lied to for over a year?” asked the White Rose, a peaceful resistance group that helped organize the event. “Do you know that far more people are dying due to lockdowns and restrictions than from the virus?”

The non-violent demonstrations defied punitive government health guidelines, which prohibit large gatherings and mandate strict adherence to masking and social distancing. Similar events that drew around 18,000 people were broken up in Berlin on the same day.

The U.K. has employed some of the harshest COVID-19 measures in the world, but finally began allowing restaurants and other “non-essential” businesses to re-open earlier this month after a months-long winter lockdown.

Researchers with the Department of Health have projected that more than 100,000 lives could be lost due to the country’s restrictions. Only around half of British deaths during the COVID-19 crisis ultimately may result from the virus itself, the scientists said, citing rising mental health problems and missed medical appointments.

Several studies have shown that business closures and stay-at-home orders have little to no effect on virus spread.

Earlier this month, the British government announced plans to introduce “vaccine passports” for citizens to prove their COVID-19 vaccine status before being allowed to attend public events or travel. The proposal has been met with strong opposition from lawmakers, with more than 70 MPs denouncing the idea as “divisive and discriminatory,” echoing warnings of watchdogs.