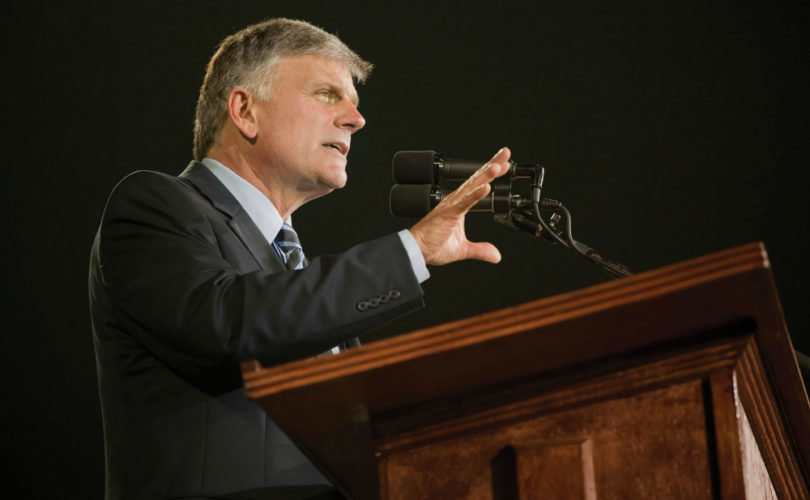 VANCOUVER, British Columbia, February 24, 2017 (LifeSiteNews) – U.S. evangelist Franklin Graham is not letting name-calling from a handful of ministers and left-wing politicians stop him from participating in Vancouver’s Festival of Hope early next month.

A group of 14 ministers have written a letter requesting the event drop his keynote address at the last minute. They accuse of him being “anti-gay,” among other charges.

But Graham is himself the organizer, as CEO of the Billy Graham Evangelistic Association. The association is conducting the event with the support of 327 mostly evangelical churches in the Vancouver area.

“To even entertain any kind of thought of changing any event,” association spokesman Frank King said, “we simply would not do that.”

The group of 14 ministers is led by Tom Cooper, president of City in Focus, an interdenominational social justice group.

“We have no problem with someone coming to preach the gospel. But it can’t be such a divisive figure that’s so anti-Muslim, anti-gay, anti-black,” he said.

At the same time, archdiocese spokesman Paul Schratz announced the archdiocese would not participate in the event, citing criticism of Graham by other American evangelical leaders for divisive statements.

In the first letter a year ago, the group complained of Graham’s frequent “incendiary and intolerant” and “ungracious and bigoted” comments, and warned they could “generate serious negative impact on the Christian impact in Vancouver.”

This time, the critics cited the recent murders of several worshippers at a Montreal mosque. Stephenson, called in his biography Canada’s “first openly gay cabinet minister,” said the killings showed there was good reason to fear a repetition because of Graham’s comments about Muslims.

“The city has an issue of safety here and we're really concerned about it,” Stephenson said.

The news media played a supportive role, reporting several past remarks by Graham out of context. For instance, the Sun reported Graham has said homosexuals are “the enemy” and will “spend eternity in hell” if they don’t repent but left out that he included “adulterers” in the same warning and at other times has warned that all who don’t repent will go to hell.

The CBC contributed other fragments of comments by Graham. One was his recommendation that the U.S. use “weapons of mass destruction if need be” and the second calling Islam “a religion of hate.” What the CBC did not reveal was that he made these statements a few days after Muslim terrorists destroyed the World Trade Center in 2001.

Cooper added “anti-black” to the indictment without offering any evidence. An Internet search turned up only this innocuous comment from Graham: “Listen up — Blacks, Whites, Latinos, and everybody else. Most police shootings can be avoided. It comes down to respect for authority and obedience.”

Jeff Adams of the Billy Graham Evangelistic Association of Canada explained to LifeSiteNews that Graham was in Vancouver because a sufficient number of local church communities supported his visit.

“We only go where invited by a broad spectrum of the faith community,” Adams said.

Asked which denominations were involved, Adams said, “I can’t think of a denomination that doesn’t have at least one church” among those supporting the event.

Graham himself responded with a statement asking his critics to ignore their political objections and welcome his “simple Gospel message of God’s hope, love and redemption for all people regardless of ethnicity, age or gender identity.” For anyone “searching for answers” or “wondering if their life has meaning,” Graham promised, “I will have good news to share.”

“Politics, policies, economics, and commerce are significant matters,” he added. “But for these three days we will … focus on the most important thing of all: God’s love for each and every one of us.”

Rev. George Wong of the Evangelical Chinese Bible Church in Burnaby disputed the picture presented by the group of critics. He told the news media that Graham “is not coming to Vancouver to preach against homosexuality but to preach the gospel … The last thing we want to do is promote hate.”