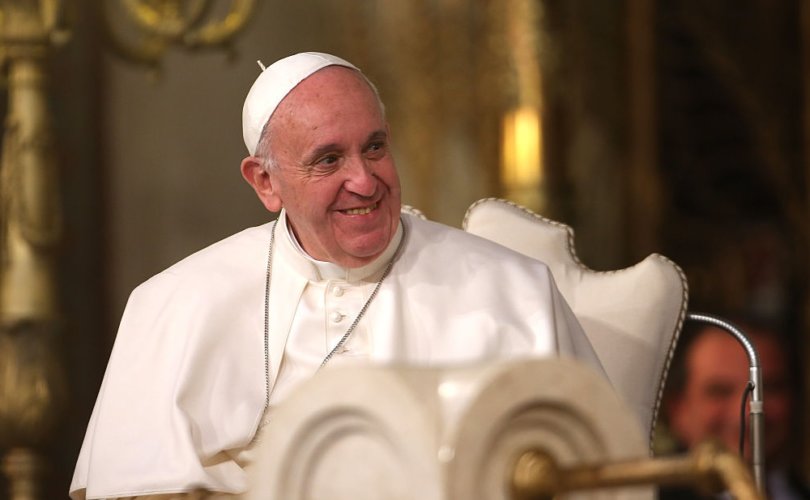 VATICAN CITY (LifeSiteNews) – In a message delivered to the globalist-linked Paris Peace forum, attended by pro-abortion and pro-LGBT leaders, Pope Francis decried any desire to “return to normality” which was marked by “injustice,” but instead calling for “a new way out.”

The Pope’s message, delivered November 11 at the 4th Paris Peace Conference, claimed humanity was facing a “historic moment” and “a choice.”

We cannot ‘return to normality’

Pope Francis attacked the idea of “so-called ‘return to normality’,” as being one “in which wealth and economic growth were reserved for a minority,” and in which the earth was “trashed by myopic exploitation of resources, by pollution, by ‘throwaway’ consumerism.”

“A return to normality would also mean a return to the old social structures inspired by ‘self-sufficiency, nationalism, protectionism, individualism and isolation’ and excluding our poorest brothers and sisters,” Pope Francis stated. “Is this a future we can choose?”

Describing the world as “globalised but fractured,” Francis posited current “decisions” as “determin[ing] the ‘trajectory’ of future generations.”

“This is why we need a new way out; we must work together to emerge better than before,” he continued.”

Quoting John XXIII’s Pacem in Terris, Francis wrote that the first steps in this process would center on “a concrete collective commitment to full disarmament.”

While calling the COVID-era “the great storm that has shaken the world,” Francis proclaimed that it had revealed the “limitations and shortcomings of our societies and lifestyles.” He called for an ecumenical movement – “the Christian tradition, in particular the Church’s social teaching, as well as other religious traditions” – which would show that “injustice and violence are not inevitable, that they are not our destiny.”

“Let us not waste this opportunity to improve our world; to adopt resolutely more just ways to advance and build peace,” Francis added. “With this conviction, it is possible to generate economic models that serve the needs of all while preserving the gifts of nature, as well as far-sighted policies that promote the integral development of the human family.”

Now in its fourth year, the Paris Peace Forum is, amongst other thing, devoted to: “fighting fake news,” “achieving equality between men and women,” responding to COVID-19, as well as “reforming Capitalism” and “governing AI.”

The Forum itself was billed as gathering “the most important players in global governance” to “advance concrete solutions to the enormous challenges posed by the Covid-19 pandemic, and to improve global governance in times of Covid-19.”

Official partners of the Forum include Bill Gates’ Microsoft Corporation; George Soros’ Open Society Foundations; the Bill and Melinda Gates Foundation; the Rockefeller Foundation; as well as various banks and Big Tech entities such as YouTube and Twitter.

While several of the national leaders present have enacted strict COVID restrictions banning large gatherings in their home nations, the Peace Forum saw over 1,000 participants gather in Paris.

To these participants, Pope Francis addressed his message, asking them to “accept the challenge of assuming the crisis as ‘a real opportunity for conversion and change in order to rethink our way of life and our economic and social systems’.”

The Pontiff did not mention any aspect of the severe COVID restrictions which are causing societal distress, nor refer to God, or any of the moral crises promoted by members of the Forum.

Francis’ message is merely the latest in a series of recent acts in which he has aligned himself with global corporations committed to anti-Catholic agendas.

The Pontiff’s call for a structural shift in society is a continuation of his March message, when he called for a “new world order,” linked the concept of salvation to the promotion of this “order,” and pushed for a green, earth-centered agenda.

He then addressed the World Bank and International Monetary Fund (IMF), again calling for “global governance,” pushing for universal vaccines, and bemoaning the “ecological debt” which is owed to “nature itself.”

Pope Francis has also launched his own initiative with the U.N. and with globalist corporations, in order to promote a new “economic system” of capitalism, and ensure the achievement of the U.N.’s Sustainable Development Goals (SDGs). Amongst other aspects, the partnerships promote “sustainable lifestyles,” “gender equality,” and “global citizenship,” while the SDGs themselves promote “sexual and reproductive health services.”

The day after addressing the Paris Forum, Francis sent several messages of praise to the pro-abortion UNESCO agency, describing it as a “privileged partner of the Holy See in the common service to peace and solidarity among peoples.”

He also called on the COP26 climate change conference to urgently pursue the goals of the pro-abortion 2015 Paris Climate Agreement.

Francis’ lines seemed to echo the sentiments expressed by key globalist and founder of the World Economic Forum (WEF), Klaus Schwab, whose proposed anti-Catholic “Great Reset,” is underpinned by a focus on a green financial agenda, as he mentions the “withdrawal of fossil-fuel subsidies,” and a new financial system based on “investments” which advance “equality and sustainability,” and the building of a “‘green’ urban infrastructure.”

Schwab, the IMF, and scores of the world’s most influential banks (including the World Bank), have in fact already committed themselves to enforcing the green agenda of the Great Reset, and look set to make adherence to such green policies a criteria for access to finance in the future.

Francis has signaled his intimacy with Schwab, by sending an address to the WEF four times in his eight-year pontificate, and allowing an annual Vatican roundtable at Davos, the WEF’s annual conference site in Switzerland.

Pope Francis in TED talk: ‘We only have a few years’ to fix climate change