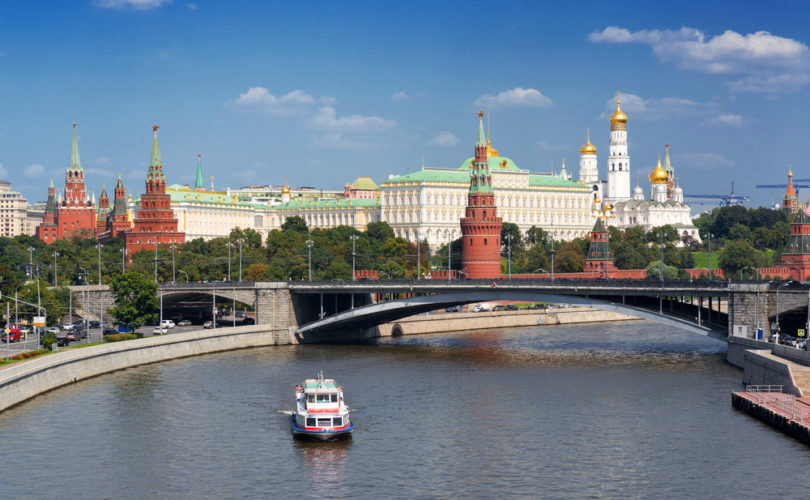 MOSCOW, June 8, 2015 (LifeSiteNews) – The public authorities and citizens of Moscow continued their long-standing resistance to homosexual ideology this year, stopping an unauthorized “gay pride” parade in the center of their city and arresting participants, according to reports in local and international media.

Despite being refused a permit for the tenth year in a row, parade organizers attempted to carry out a demonstration on Tverskaya Street, just across from the mayor's office, but were foiled by pro-family counter-protesters and police, who descended upon them in large numbers to interrupt the illegal event.

Two protesters who let off orange smoke from a quad bike sporting a rainbow-covered flag were accosted by counter-protesters and beaten, then arrested by police. Another group displayed a rainbow flag with the words “Make love not war,” were also stopped by a group of counter-protesters before police took away the flag, according to Reuters.

Moscow authorities detained an estimated 20 people in all, representing both points of view.

The principal organizer of the event, Nikolai Alexeyev, was lead away with a bloody hand after police said he refused to obey orders. He was sentenced the following Monday to ten days in jail.

Moscow residents are strongly opposed to homosexual “parades,” which are often the scenes of public nudity, obscene images, and even public sex acts, and see such events as direct attacks upon the values of their society.

They also see such events as infringing upon their culture perpetrated by the countries of the European Union, which treat the homosexual lifestyle as a “right” and have attempted to impose such marches on Moscow. In 2010, the EU-dominated European Court of Human Rights declared Moscow’s “pride” ban to be illegal and ordered the city to permit such parades. However, the government has refused to comply.

According to a recent poll by Russia’s Levada Center, 84 percent of Russians oppose homosexual “marriage,” and only seven percent support it.

The public’s support for the country’s law banning homosexual propaganda has risen from 64 percent in 2013 to 74 percent today.

“We found out that today the LGBT community was planning to hold an unsanctioned rally and we wanted to help the law enforcement agencies stop it,” said Dmitry Enteo, one of the organizers of the counter-protest, who was also arrested by police, in an interview with AFP. “These are heinous anti-Christian values,” he added. “We don't want the Dead Sea to wipe away our beautiful city as it did to the ancient town of Sodom.”

“We’re gathered here today to prevent homosexuals from making propaganda of their sin seem normal,” one woman told the BBC. Another woman – who brought a poster stating, “No to euro gay values” – told Reuters, “I'm against this phenomenon which is imposed on us, against homosexuality, against non-traditional values to put it mildly, or speaking [plain] Russian: against pederasty and sodomy.”

A “flashmob” protest held in Moscow on May 17 to celebrate the “International Day Against Homophobia, Transphobia and Biphobia” was also quickly ended by authorities, who arrested 17 people. However, a similar protest in St. Petersburg on the same day was allowed to proceed unhindered by authorities, who even guarded the event.