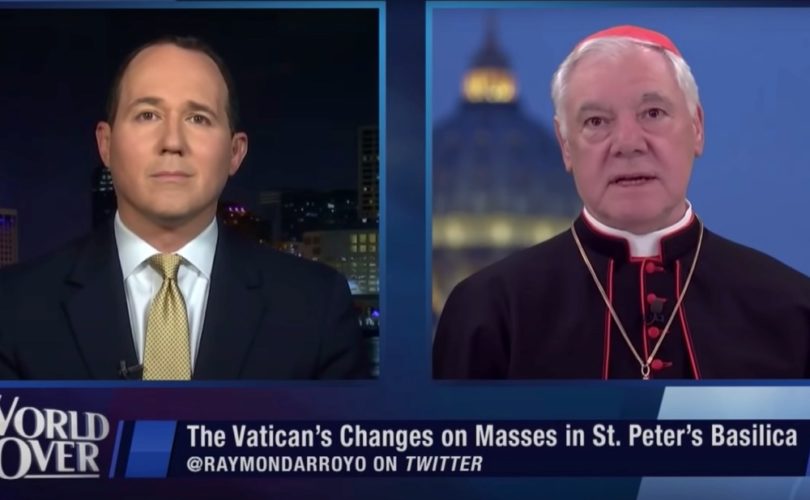 “Nobody is obliged to obey it,” Müller told Raymond Arroyo on ‘The World Over,’ arguing that the Vatican’s Secretariat of State, which issued the letter, doesn’t have “disciplinary competence” or “theological competence” “about the liturgy [in] St. Peter.”

The note in question, which was circulated on March 12, states that “individual celebrations” of Mass “are suppressed,” and that priests who were once able to say Mass at one of the many altars in St. Peter’s Basilica are now limited to “concelebrated” Masses at two locations, during a two-hour time slot.

The directives are enforced beginning March 22.

Müller pointed out to Arroyo that “nobody can be forced to concelebrate, because the normal form of the holy Mass is one priest is celebrating, representing Christ.”

“Perhaps [there is] the possibility of concelebration of the bishop and his priest in the diocese and the cathedral, but the concelebration only of priests together is not a normal form,” Müller continued.

He also noted the absurd contradiction of forcing two priests to say Mass in close proximity to each other, while COVID-19 is simultaneously being used as a pretext for other restrictions in the Vatican City State including “the restriction of movement and assembly of people, physical distancing, isolation and quarantine,” and “vaccination protocols.”

“Now we are living [in] the corona time, everybody is speaking about the social distance, and now they are forced to con-celebrate, to come together,” said Müller.

“This letter is very strange, and this argumentation and the terminology — holy Masses are ‘suppressed’ — doesn't sound very Catholic,” said Müller.

Now that Latin Masses have been confined to one altar in the Vatican Grottoes, “Everybody is forced to listen in Italian” in the Basilica, noted Müller.

“But there are some sisters who are taking part in these Masses who are not able to speak it, to understand the Mass in Italian, and therefore why is [it] not allowed to celebrate the holy Mass in Latin, [the] language of the Church, or in the languages of the priests and the participants of the languages of their countries where they are coming from,” Müller continued.

Commenting on the decree’s narrow restriction of the number of Masses that can be said in St. Peter’s Basilica, Müller said, “We must be happy to have everywhere the holy Mass, because the holy Mass is a center of the Catholic sacramental life and also of the spirituality of every priest.”

The decree’s impact falls heavily on “a great number of priests in the Curia who have no other possibility to celebrate because they are living in the Vatican,” Müller further noted.

When Arroyo pointed out that the decree had “no clear signature except for the initials of the deputy secretary of state,” and that “the new rules were never formally announced,” Müller said, “I think they [did not have] a good conscience and therefore they made these maneuvers.”