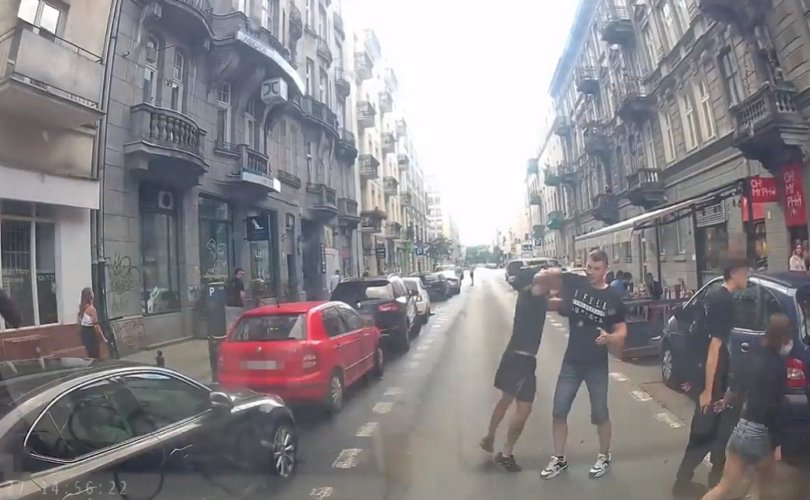 WARSAW, Poland, August 18, 2020 (LifeSiteNews) — Poland’s first “non-binary” activist is in prison awaiting trial following a violent incident in which he attacked a pro-life and family activist and damaged a vehicle.

Michał Szutowski, who also goes by the feminine names “Margot” and “Małgorzata” and the surname “Szutowicz,” professes to believe that he is “non-binary” — i.e., neither a man nor a woman. He is also the leader of a left-wing group called “Stop Bzdurom” (“Stop the nonsense”).

According to various Polish media reports, on June 27 in Warsaw, Szutowski attacked a vehicle owned by the pro-life, pro-family group Fundacja PRO, which carried a sign reading, “Stop Pedofilii” (“Stop Pedophilia”) and warning parents about invasive sexual education. The “Stop Pedofilii” campaign aims to keep children’s sexual education free from ideological coercion. In the course of the attack, Szutowski assaulted the driver.

Originally, a court decided that Szutowski should merely be fined 7,000 PLN ($1,899 USD) and placed under police supervision. However, after an appeal by a prosecutor, a court decided that the activist should be imprisoned for two months to await trial. According to the pro-LGBT Polish news website WP Wiadomości, Szutowski was originally jailed in Warsaw and has now been moved to a prison in Płock.

Górny explained that until now, only homosexual or transsexual activists had appeared in Poland; Szutowicz/Szutowski is the first example of a transgender (in this case “non-binary”) activist.

“He’s not insane; he is premeditatedly carrying out the same program which has already been tested in many western countries with the goal of bringing about a cultural and anthropological revolution,” Górny said.

“Stop Bzdurom,” which consists of a website for the leftist movement, was founded in 2019 as a response to Fundacja PRO’s “Stop Pedofilii” campaign, Górny explained.

“Michał Szutowski and his companions have decided to fight with Fundacja not only with arguments but also with fists,” he added.

“In June they attacked Fundacja PRO’s van with the sign ‘Stop Pedofilii’ — they beat the driver, sliced the tires, damaged the tarpaulin, tore off the mirror and the registration plate, damaged the rearview camera, and smeared the vehicle with paint,” he reported.

“It was really for this reason — and not for voicing his opinions — that Michał Szutowski was arrested by police.”

According to the pro-life group Centrum Życia i Rodziny (“Center for Life and Family”), fake news is being spread by officials in the European Union about Szutowski’s arrest and imprisonment, suggesting that Poland is violating the freedom of speech and assembly of people with same-sex attractions or gender dysphoria.

“[The] European Union Commissioner for Equality, Helena Dalli, presents Polish authorities and police officers as oppressive,” a spokesperson wrote on the Centrum’s website. “She has lately tweeted that ‘Everyone in the EU, including #LGBTI persons, has the freedom to assemble and the right to conduct peaceful protest.’”

Dunja Mijatovic, the Council of Europe’s commissioner for human rights, tweeted suggestions that Szutowski had been arrested for professing his opinions.

“I call for immediate release of  LGBT activist Margot [sic] from .@stopbzdurom detained yesterday for blocking an anti-LGBT hate van & putting rainbow flags on #Warsaw monuments,” she wrote on August 8.

Mijatovic was criticized by popular Twitter commentator “Based Poland,” who responded: “The transsexual activist physically attacked a pro-life activist, beating him up & vandalizing his car. I say the transsexual should be released because of being transsexual. Sorry, we have rule of law in Poland & attacking ppl is illegal here. We won’t do any western experiments.”

Polish voters may have recently re-elected President Andzej Duda, whose campaign promises included strong resistance to LGBT ideology, but this has only angered the small number of homosexual activists and their allies.

Last month, LGBT activists in Warsaw desecrated a statue of Christ of special importance to survivors of the Warsaw Uprising against the German Occupation of World War II: they gagged the figure with a mask marked with the anarchy symbol and put a rainbow flag between the figure and the cross.

Szutowski was also linked with these desecrations, and more LGBT protests have followed since the July event. As Mijatovic noted, 48 people were detained after they tried to prevent police from taking Szutowski into custody.

“Today there is a very fierce culture war in Poland,” Górny told LifeSiteNews. “Poland is the last large country in Europe in which the social consensus has a conservative-Christian character, and not liberal-left. Abortion on demand is forbidden, ‘homosexual marriage’ is impossible, euthanasia is illegal.”

This is a matter of not just law, but the “social consciousness” of the vast majority of Polish people, which Górny said is rooted in Christianity.

“Poland ranks first in Europe regarding religious practises; around 40% of Catholics go to church every Sunday,” he added.

The journalist believes that left-wing activists who want to change Poland’s essential character are funded from abroad by charities associated with George Soros, for example. However, he also believes that leftists’ attacks on citizens and on the Catholic Church are “counterproductive.”

“Poles still remember the ruthless fight of the communists against the Church,” Górny said. “Thus they don’t like ideological attacks and are on the side of the victim rather than on that of the aggressors.”

Naturally, there are competing narratives regarding who is the victim and who is the aggressor: the Polish far left and its allies abroad are portraying Michał Szutowski as the former and the conservative Polish government as the latter. However, Górny believes that the majority of the Polish citizenry see matters quite differently.

“The LGBTQ movement is not perceived as a group persecuted and repressed by [our] leaders but as an aggressive [group] striving to destroy social order, profane Christian and national symbols, and in addition to that, are generously financed by sponsors,” he said.

“In the West the liberal-left narrative dominates this conflict, but it’s different in Poland. For the conservative majority Michał Szutowski is not a hero but a hooligan, who should answer before a court for assault and robbery.”