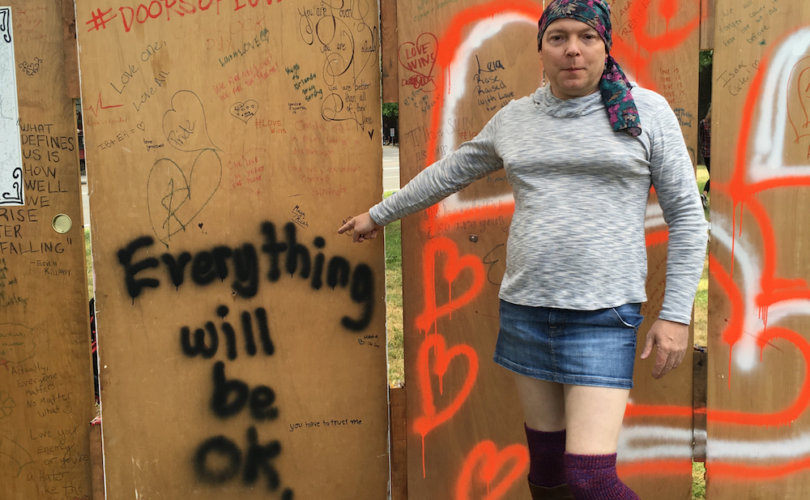 A Lambda Legal attorney informed Jamie Shupe of the decision by phone earlier this month, Shupe told LifeSiteNews, just before written confirmation of the termination arrived via email.

Shupe had “taken a position contrary to, and irreconcilable with, Lambda Legal’s organizational interests,” its other transgender clients, and members of the transgender community at large, according to the termination letter.

Lambda Legal ended the relationship due to Shupe’s “public statements and actions,” it said, including a recent radio interview expressing support for Washington State Initiative 1552 — a bill mandating bathroom designation by biological gender — and also statements regarding transgender people serving in the military.

Lambda Legal did not respond to LifeSiteNews’ inquiry into specifics behind the decision.

Shupe entered into an agreement with the LGBT legal group last fall for representation in connection to his pending application for a passport reflecting his non-binary status.

The agreement said Shupe was to work with Lambda Legal on publicity strategy regarding his legal matter, and any pre-planned publicity, presumably related to the matter, was to be cleared with Lambda first. Lambda reserved the right to withdraw Shupe’s representation if it required Lambda to take a position it deemed detrimental to LGBT rights.

Deal with the devil

Shupe conceded to LifeSiteNews that it could be argued he acted outside the bounds of the agreement. But he said going into it he felt like he was making a deal with the devil, and for him it was a matter of conscience.

“I didn't like the retainer agreement and I basically dared them to fire me,” Shupe said. “I knew what the retainer said. I don't tell lies for the cause.”

Shupe thinks Lambda Legal put him under retainer in the first place for its own purposes, not intending to file suit on his behalf but instead to benefit from citing his case while also keeping him quiet in the media.

“Basically because we are by and large so economically disadvantaged as a population group,” he continued, “they use their free legal help to channel people like me into advancing their ideologies, even when we don't agree with the advanced ideology. But per the retainer we can't say anything other than what they want heard. I refused to play the game, so they fired me as a client.”

Not falling in line

However, Shupe does not fit into what many would consider an LGBT mold. Nor does he fit into where some in the LGBT movement would have him go.

Aside from the interview with a conservative outlet supporting the Washington state bathroom referendum, Shupe wrote an August 1 Mercatornet.com column on the issue of transgender military service.

President Trump announced via Twitter on July 26 that transgender individuals would not be allowed to serve in the U.S. military. The White House reportedly issued subsequent policy guidelines on phasing out transgender troops, though the document has not been released to the public. He cited in part “tremendous medical costs” in his tweet, an apparent reference to the cost of gender reassignment surgery and transgender other treatment.

In Shupe’s column, he stated that simply being transgender does not make one unfit to serve, rather the issue is whether their gender dysphoria affects their duty performance.

He also spoke in the article about the serious dangers of untreated gender dysphoria and said the best-known treatments are hormone replacement therapy (HRT) and a variety of surgeries. “But these treatments are not as harmless as the American public has been led to believe.”

He also wrote how speaking about the realities of transition surgery making a soldier non-deployable for extended period of time does not make one a bigot, and that it’s a mistake to ignore.

Shupe is a retired military veteran who served as transgender for 18 years and who was highly decorated for non-combat service.

“I served. And I didn’t die even though I didn’t get any trans healthcare,” Shupe wrote. “I’ve never tried to commit suicide. That’s because I was psychologically tough and overcame gender dysphoria. I believe that if I’m capable of military service without medical treatment, then I should be deemed fit to serve.”

“The American public has been sold on the ideology that simply switching the hormone operating fuels in the two sexes makes them equal when it comes to sports, fitness, or biology,” he wrote. “This is false.”

Not afraid to voice his opinion

Shupe has been outspoken on these issues in other instances.

He is well versed in and very vocal about trans issues. Shupe has a personal website compiling information on trans issues and another tracking bathroom incidents.

He has written to the Joint Chiefs of Staff regarding transgender military service and to a hospital regarding the dangers of sex reassignment surgery, along with other instances of speaking out.

Shupe has expressed his stances to NBC News, USA Today and other outlets.

And he is the only trans activist to speak out against Chelsea (Bradley) Manning’ release from prison in May. Manning, a transgender male who identifies as female, is the former army private convicted of violating the Espionage Act. He had his sentence commuted by Barack Obama just before Obama left office.

Aside from Manning’s conviction, Shupe offered a reminder of how Manning had punched a female superior during wartime in a combat zone.

Who gets to say?

Lambda Legal also took issue with the fact that Shupe didn’t identify his gender as non-binary. He identifies as feminine/female but does not consider himself a biological female, and he was told that this goes against what Lambda Legal advocates for.

“I said they don't have a right to decide with their ideologies that I have to be a female,” Shupe told LifeSiteNews.

Shupe was born a biological male but claims a gender identity of feminine/female. Female hormone treatments did not successfully transition his gender. However, during treatment he was given legal female status, before his current non-binary declaration.

Being legally non-binary, Shupe believes, is his best possible option to live out and explain his identity, because he feels neither fully male nor female.

Non-binary is an umbrella term for individuals who don’t fit into the traditional male and female classifications, or for someone who rejects them entirely.

Shupe’s stance is that he has mismatched traits that make him more like an intersex person rather than either male or female, analogous to being a mixed-race person.

Shupe was declared the first legally non-binary person in the United States in June 2016 when an Oregon judge declared his sex to be neither male nor female. The state of Oregon issued Shupe a state ID with an “X” as the sex identifier on July 3.

Last November, the District of Columbia, where Shupe was born, removed the sex from Shupe’s birth certificate. Shupe said this was the first time in the District’s history that such a document was issued.

Against the LGBT grain

Having declared himself non-binary has likely formed a path for others. More than 250 Oregon residents have listed their gender as 'X' on licenses and ID cards since the state became the first to make 'not specified' an option, the Daily Mail reported.

Yet Shupe’s views on trans issues are not always welcome within the trans community.

He also distinguishes between those with gender dysphoria — individuals who often identify as the opposite of their biological sex, whether or not taking surgical or hormonal steps to reassign their sex — and those individuals whose identity aligns with their biology.

While the dysphoria is real, Shupe holds that neither surgery nor hormones will change biological sex.

“I won't be party to telling lies for the trans community,” Shupe told LifeSiteNews regarding sex reassignment procedures. “Gender dysphoria is a mental illness that causes great distress. It's time they start admitting that convincing these trans people that they are really females is what's killing them, because they can't become females. They die trying.”

And while Shupe himself has experienced anxiety over not fitting completely into either gender role socially — such as the public restroom issue currently at the heart of gender-related culture wars — he very much believes in the right of women and girls to feel and be safe in these facilities. Shupe supports providing a separate bathroom in these cases.

He is upfront about the dangers of hormone therapy.

“Large numbers of people don't believe that a biological male is a female based on gender identity alone,” Shupe told LifeSiteNews. “I don't either, which has gotten me in a lot of trouble with the trans community.”

“And this is the sort of thing that led me into this non-binary space,” he continued. “In it, I'm not claiming the identity of others like women, nor am I harming them. I felt like I was harming females by being classified as one, and I didn't like it.”

Not a friend of the ACLU

Along with Shupe’s firing by Lambda Legal, speaking out on Manning has also put him at odds with the ACLU.

“Both denied me representation to become non-binary,” Shupe told LifeSiteNews. “So I hired the private attorney with my own money and easily won, stunning them both.”

That’s fine with Shupe, because what matters to him is telling the truth.

“The same military leadership manual that taught me to always do what’s right for the Army and for the nation continues to guide me to speak honestly,” Shupe said.

Editors note: LifeSiteNews inquired during the course of interviewing Shupe about pronoun use in regard to referencing him in print, specifically the task of doing so amid the pronoun battle in the cultural war over trans issues. Some publications will refer to trans individuals as them/they/their in place of the individual’s biological pronoun. Shupe said he handles the pronoun issue much more gracefully because he no longer has to fight for it due to his change to non-binary.

He said further: “I also shouldn't expect anyone to feel bad about describing what they feel like they're seeing. I'm totally not into forcing people under threats to recognize pronouns. It's a respect someone can choose to give me, or not choose. It's still America.

Living as a woman or man that's opposite of your biological sex comes with this inherent responsibility to fight over the correct pronouns. I've removed myself from that battle. I don't find it productive.”