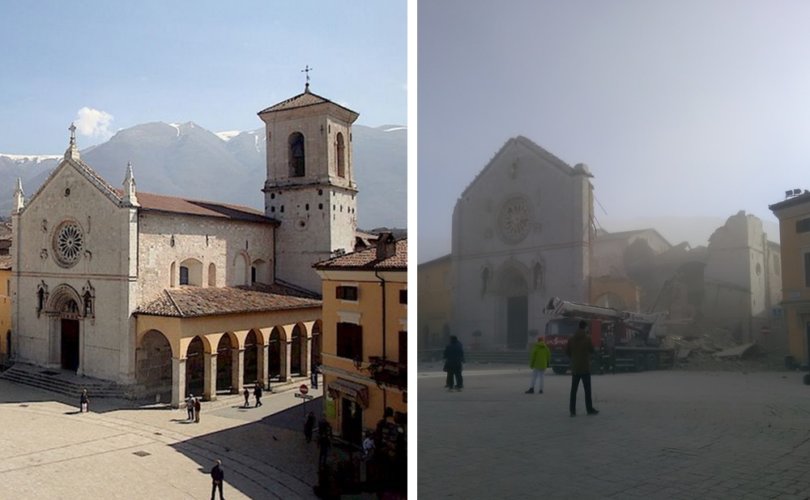 St. Benedict's Basilica in Norcia, before and after the quake.

NORCIA, Italy, April 26, 2017 (LifeSiteNews) — The Benedictine Monks of Norcia will not, as they had hoped, rebuild the Basilica of St. Benedict, site of the birthplace of the father of Western monasticism, after it was destroyed by an earthquake last October. Instead, the local archbishop has decided to rebuild the Basilica in a “modern style” and will use the quarters as his part-time residence.

“The Archdiocese of Spoleto-Norcia, which owns the buildings, has decided that the spaces will have to be used by the diocese since all the other churches in town were also destroyed,” the monks state on their website.

The order has announced that their move after the quake to an old monastic grange on a hill above the city about two miles away will now be permanent.

The Basilica was destroyed save the facade on October 30 after a 6.6 quake hit central Italy. The quake's epicenter was located just 6 miles away from the ancient Umbrian town.

Dr. Robert Moynihan, founder and editor-in-chief of Inside the Vatican magazine, said in an April 23 email that he had spoken with the monks about the archbishop’s decision.

“They told me that the archbishop of Spoleto, Renato Boccardo, age 64 — who has jurisdiction over Norcia — has decided that he will rebuild the Basilica of St. Benedict in a modern style of architecture. He will also take possession of the quarters where the monks had been living from the year 2000 until October 2016. He will use the quarters as a part-time episcopal residence,” he wrote.

“So the Benedictine monks of Father Cassian will not return to the center of Norcia, to the spot where St. Benedict and his twin sister St. Scholastica were born. That period of the monastery's life is over now, it seems. The monastery will now be built on the hillside above the city, about two miles outside of the city walls,” Moynihan added.

In a blog also dated April 23, Father Benedict Nivakoff, the monastery's prior, alluded to the struggle that the archbishop's decision has caused to the community.

“For us monks, there have been struggles: on minor things, like the type of brick to be used to the roof, but also about serious things, such as how to meet the high hopes that the community has placed in us after the earthquake,” he wrote.

“The Archbishop has shared with us his concern for the pastoral needs of Norcia, and this has allowed us to understand more clearly that our task is to live more deeply the monastic life in the new monastery on the mountain, because God seems to have other plans for the oldest monastery in the city,” he added.

Prior to the quake, the monks had completed many renovations on the property, including the library, sanctuary of the basilica, monastic cells, and bell tower. They had commissioned a beautiful painting of the Crucifixion for their new and expanded refectory.

All of this has now been lost.

The monks stated on their website that they were grateful for the support they received in rebuilding the Basilica after they had moved to Norcia from Rome in the year 2000.

“For 16 years, the monks acted as guardians over the historic birth home of St. Benedict and his twin sister St. Scholastica. The monks are grateful to the many who helped them restore the basilica to great beauty over the course of those blessed years,” they said.

The monks of Norcia are an international community committed to living according to the ancient observance of the Rule of St. Benedict. They are seen by faithful Catholics across the world as a lighthouse of orthodoxy and a stronghold of sanity in a Church troubled by unrest, uncertainty, and disintegration.

The monks said that the European Union as well as the Italian state have pledged to help restore the basilica and monastery, now according to the plans of the archbishop.

“Throughout the many years needed for the massive work of reconstruction, while the monks work to build the new monastery in Monte, their hearts will remain there in the ancient crypt of the basilica, the birth home to their great founder and father, St. Benedict,” they said.

Fr. Benedict said in his Easter message that the hand of Divine Providence must be looked for in the archbishop’s plans for rebuilding the birthplace of the two saints.

“For the monks it is a time to focus on new building projects at our home in the Norcia mountains, following the request from the archdiocese asking us to free up space in our buildings in town (which belong to the diocese) for their own needs,” he said.

“The archdiocese has hundreds of damaged properties and the buildings in town were among the least damaged. We see their request as a sign of God’s will as we too can begin a new chapter of our community’s life on the mountainside,” Fr. Benedict added.