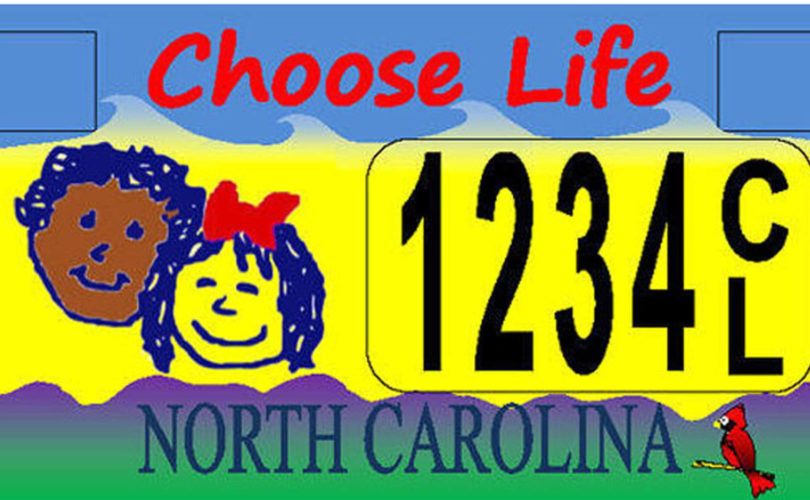 RICHMOND, Virginia, March 11, 2016 (LifeSiteNews) – North Carolina's citizens are free to choose life, and to tell their fellow drivers they should, as well, according to a court ruling handed down this week.

A three-judge panel of a federal appeals court has ruled that the state's “Choose Life” license plates are constitutionally protected speech and may be issued, even if the state does not offer a plate affirming abortion-on-demand.

The 2-1 decision issued Thursday holds that “specialty license plates issued under North Carolina’s program amount to government speech, and that North Carolina is therefore free to reject license plate designs that convey messages with which it disagrees.”

The Fourth Circuit Court of Appeals based in Richmond, Virginia, reversed a previous decision from 2014 in light of a Supreme Court ruling in Walker v. Texas Division, Sons of Confederate Veterans handed down last year.

The state's ACLU chapter, which filed the lawsuit, called the ruling “very disappointing.”

“North Carolina can now deny drivers on one side of this contentious issue an equal ability to express their views,” said Sarah Preston, the group's acting executive director.

In 2011, legislators rejected calls to press license plates bearing messages like, “Respect Choice.” They also designated that anywhere from $15 to $25 of the proceeds of the specialty license plates would go to the Carolina Pregnancy Care Fellowship, a coalition of dozens of crisis pregnancy centers that serve more than 3,000 women each year.

The chapter did not indicate if it would appeal the decision.