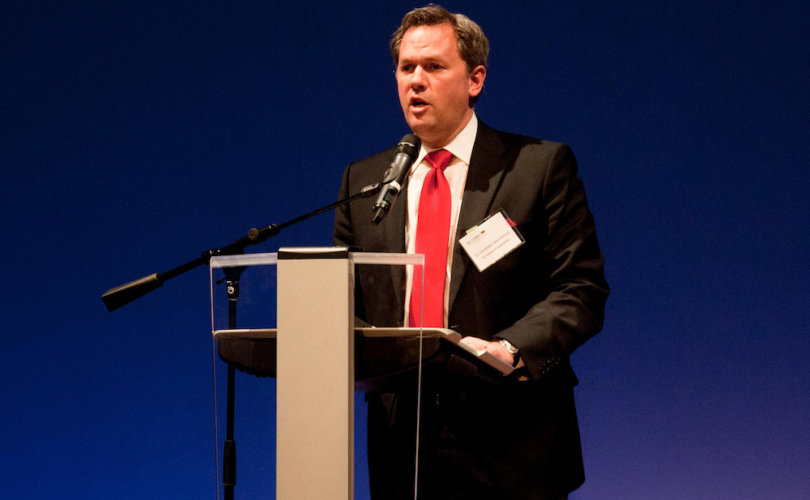 “H.B. 2 was a bill of reasonable accommodation,” the lieutenant governor said, likening it to the Americans with Disabilities Act (ADA) of 1990.

The state law prohibits local governments from forcing private businesses or public buildings to open restrooms, locker rooms, and overnight accommodations of one biological sex to members of the opposite biological sex. Leaving businesses free to set their own policies, it said people must use the restrooms of the gender on their birth certificates in government buildings.

“This was a response,” the lieutenant governor reminded the crowd, to a local Charlotte ordinance that he called blatantly “unconstitutional.” It required all public accommodations to allow people to use the facilities of the gender with which they identify.

He added that one of the leading activists behind the ordinance – Chad Sevearance, president of the Charlotte Business Guild, – was a registered sex offender accused of showing young men pornography and fondling one boy in his sleep. His leadership proved “it wasn’t a reach” to say the law would benefit would-be molesters and voyeurs.

Faced with potentially exposing women to sexual predators, Forest and Gov. Pat McCrory called a special session to pass H.B. 2 – but then an unprecedented backlash ensued, from PayPal to the NBA.

“Corporate America came against us,” he said. The Obama administration threatened to withhold Title IX educational funds from the state unless it rescinded the law, something he called “complete extortion.”

“This is pressure coming on from the Human Rights Campaign” — an LGBT lobby group — on “corporate America … to push their sexual revolution, social engineering agenda on America in municipalities and federal courts,” he told the crowd in rising cadences.

“North Carolina is a battleground state” in November’s presidential election, he said, saying the Democratic Party hoped to create “a third rail” out of the restroom issue to benefit Hillary Clinton and the Democrats facing him and McCrory in a tough election battle.

Gov. McCrory has released a new campaign video this week saying the bill is “the right thing” for the state’s children.

“That is common sense policy in America,” Forest told the Values Voter Summit in the Omni Shoreham Hotel.

The summit’s sponsoring organization, the Family Research Council, had previously questioned Barack Obama’s priorities in fixating on the issue of restrooms.

Lt. Gov. Forest revived that criticism, naming a litany of national crises ranging from the national debt to impending terrorist attacks from ISIS before quipping, “I’m here to talk about bathrooms.”

But people of faith, he said, had to have their priorities right. Paraphrasing commentator John Stonestreet, he encouraged Christians to “be counter-cultural” and love their enemies.