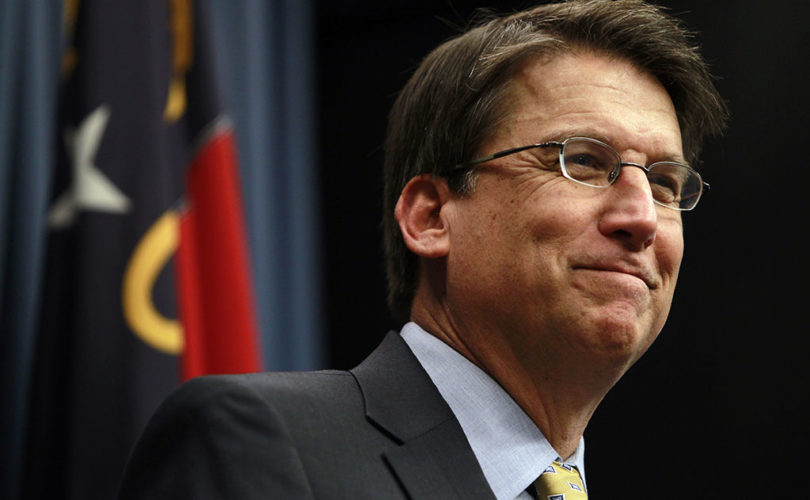 The North Carolina House of Representatives voted to override the governor's veto of a bill ensuring the religious freedom and conscience rights of North Carolina Christian magistrates and registrars.

The new law, Senate Bill 2, makes explicit that the Constitutional right to free exercise of religion applies to all citizens, specifically the right of magistrates and employees of county register of deeds.

Specifically, the new North Carolina legislation allows magistrates and officials who issue marriage certificates to “opt out” of involvement with same-sex “marriages” by citing a “sincerely held religious objection.”

Once a magistrate “opts out,” he or she would then not perform any marriage, homosexual or heterosexual, for six months. In other words, recusals can occur at any time but must be in effect for a period of at least six months.

The House voted to override Gov. Pat McCrory's veto with a 69-41 bipartisan vote. It was an unquestionable victory, since with 110 members present and voting, the override required 66 votes.

Gov. McCrory, a Republican, sided with Democrats who expressed disgust that Republicans used their majority-control to prevent any debate. House Speaker Tim Moore countered that the bill had been debated thoroughly in committees and previously on the floor when it passed in May.

But McCrory said in a statement, “It’s a disappointing day for the rule of law and the process of passing legislation in North Carolina.”

The Republican-controlled House passed the legislation in February by a veto-proof majority, but because 10 House members were absent last week when the chamber gave the bill final legislative approval, the override vote was delayed a few days.

Once the absent House members were back in session, the override took only a few minutes. “The speaker said the he would call the question when he thought the votes were there, and that is what happened,” Rep. Jon Hardister, a Republican from Greensboro, said in an email.

The Charlotte Observer noted, “It appears the outcome would not have changed if the absent 10 lawmakers had voted as expected.”

The State Senate had already voted to override the governor's veto of allowing conscience objections for magistrates last week by a 32-16 vote. This was more than enough for the three-fifths majority needed in the Republican-led state senate.

Supporters of the bill noted that the law requires that county officials must provide marriage services for all at least 10 hours per week over at least three business days. State Senator Phil Berger assured citizens that with the bill the state will comply with federal judges ordering same-sex “marriages” in North Carolina.

“If the federal courts say [gay 'marriages'] will be performed, they will be performed,” Berger explained before last week's senate override. “But if someone takes a job, they don't park their First Amendment rights at the door. They are entitled to exercise those rights.”

The national attorneys group, Liberty Counsel, volunteered to represent the magistrates. “While the federal court orders require that defendants make marriage licenses and marriage ceremonies available to same-sex couples, they do not require that every magistrate in the state be compelled to perform such ceremonies under threat of suspension, termination or even criminal prosecution,” Liberty Counsel said. “Any number of accommodations can be made for magistrates who object to issuing marriage licenses for a same-sex union.”

“Magistrates do not lose their first amendment rights when they take the oath of office,” Liberty Counsel chairman Mat Staver said. “Liberty Counsel offers pro bono assistance to any government official whose fundamental rights are being challenged by same-sex marriage and the LGBTQ agenda.”

Senate President Pro Tem Phil Berger and House Speaker Tim Moore said in a statement that without the bill the government would have “forced some magistrates to make an impossible choice between their core religious beliefs and their jobs.”

Rep. Paul Stam made the motion to override McCrory's veto, arguing that magistrates are U.S. citizens and the First Amendment applies to them, and that federal employment laws require accommodations be made for workers' religious beliefs.

Rep. Dean Arp explained, “The question is, can you be fired from a job because you choose to live your life by (your) religious beliefs.”

“Religious freedom is our first constitutional right,” Dr. Mark Creech, executive director at the Christian Action League of North Carolina, said. He speculated that the governor's veto was “prompted by cowardice or treason to religious liberty.”

Similar religious freedom bills were filed in several states this year, although none has become law yet, the American Civil Liberties Union said.

Federal judges overturned a North Carolina amendment defining marriage as being between one man and one woman last fall. Then, North Carolina's Administrative Office of the Courts issued a directive to magistrates statewide to either perform same-sex “marriages” or face disciplinary action and possible firing.

Six magistrates quit out of protest. All stepped down in the past seven months, and all because they believe marriage is exclusively a union between one man and one woman.

The veto override was Governor Pat McCrory's first in the current legislative session, which began in January. When McCrory ran for election as governor, he promised a moratorium on pro-life legislation.

The Charlotte Observer reported that the majority leader in the House, Mike Hager, said the override “stands for religious freedom.” “It does not discriminate against anyone for any reason,” Hager said. “It simply gives protection to our magistrates and registers of deeds so that they are not forced to perform an act that they have a sincere religious objection to.”

Sen. Ronald Rabin summed that view up on Twitter: “Today is a win for anyone who supports religious freedom.”