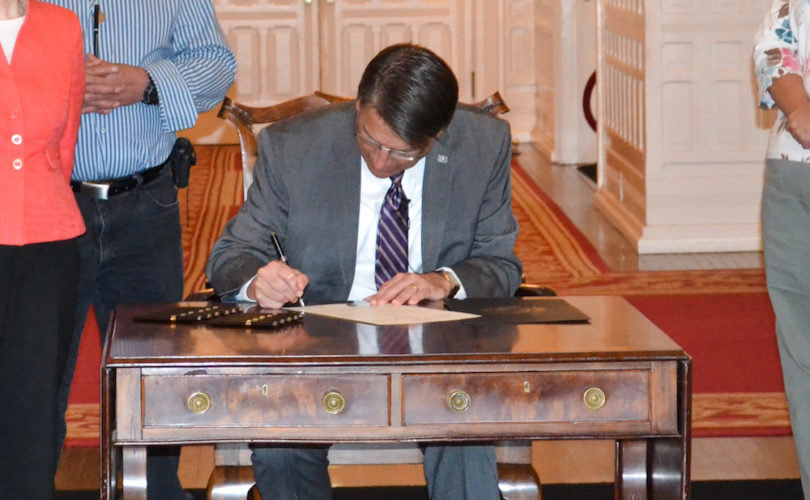 RALEIGH, North Carolina, March 24, 2016 (LifeSiteNews) — North Carolina Gov. Pat McCrory has signed a bill overturning a Charlotte ordinance that allows men to use women's restrooms and other facilities in both public facilities and all restaurants, bars, and other buildings of public accommodation.

The unanimous Senate vote was partially due to a walk-out by Democrats, who refused to vote on the bill; 11 House Democrats backed the legislation. The law limits municipalities’ ability to enact ordinances that provide special protection based on “gender identity,” and all public educational and government organizations must have restrooms and locker rooms designated by biological sex.

The law includes an exemption for transgender individuals whose birth certificates have been legally changed for self-identity as the opposite sex.

In a statement, McCrory said that “the basic expectation of privacy in the most personal settings, a restroom or locker room, for each gender was violated by government overreach and intrusion by the mayor and city council of Charlotte.”

The governor also declared that “radical breach of trust and security under the false argument of equal access not only impacts the citizens of Charlotte but people who come to Charlotte to work, visit or play. This new government regulation defies common sense and basic community norms by allowing, for example, a man to use a woman's bathroom, shower or locker room.”

Several pro-LGBT groups, including the ACLU, Lambda Legal, the North Carolina chapter of the ACLU, and Equality North Carolina, opposed the bill and may challenge its legality. “Instead of solving any real problems, the law would create new ones and could lead to intolerable and unfair conditions for transgender students who are entitled, by federal law, to a safe and equitable education,” said Tara Borello, a senior attorney with Lambda Legal, according to ABC11.

A headline for Mother Jones claims the law is “the broadest anti-LGBT bill in the country.”

While many so-called “non-discrimination” laws require businesses to open up their single-sex bathrooms and other facilities to transgendered individuals, the North Carolina measure banning government coercion allows businesses to choose how to address the issue of gender dysphoria.

The city of Charlotte will also be allowed to have internal policies for alleged discrimination against city employees.

The state's attorney general, Roy Cooper, who is running against McCrory for the governor's seat, condemned the vote. “We're better than this. Discrimination is wrong, period,” Cooper said in a statement. “That North Carolina is making discrimination part of the law is shameful. It will not only cause real harm to families, but to our economy as well.”

In a campaign e-mail released after the vote, Rep. Bishop — a candidate for state Senate — said he was “pleased and heartened that my colleagues in both chambers of the General Assembly have heard the voices of North Carolina families and businesses and passed the Public Facilities Privacy and Security Act.”

Alliance Defending Freedom Legal Counsel Kellie Fiedorek praised McCrory “for keeping his promise to immediately address the Charlotte ordinance to ensure that North Carolina businesses, women, and children are protected. Sixty-nine percent of North Carolinians agreed that the ordinance was unreasonable and unsafe in forcing women and young girls to undress, shower, or engage in other private activities in the presence of men.”