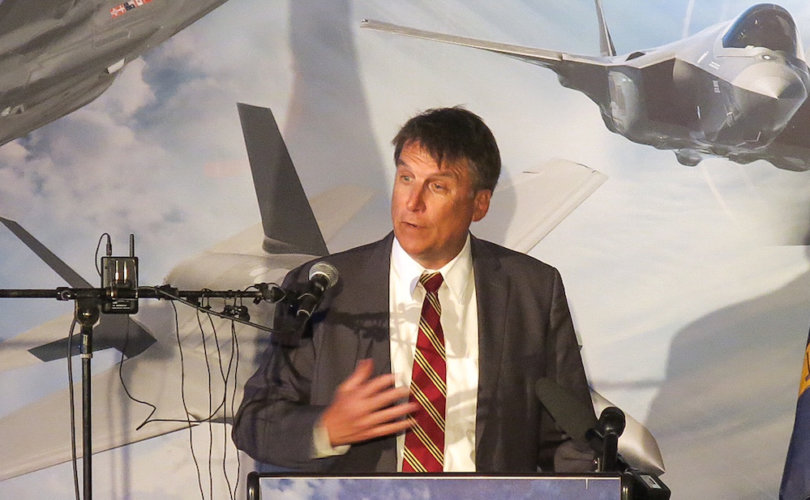 CHARLOTTE, May 9, 2016 (LifeSiteNews) – The governor of North Carolina has defied the Obama administration, asking a judge to dismiss all legal threats against his state for enacting a law that allows public accommodations to determine their own restroom policies.

“The Obama administration is bypassing Congress by attempting to rewrite the law and set restroom policies for public and private employers across the country, not just North Carolina,” said Governor Pat McCrory, a Republican. “They are now telling every government agency and every company that employs more than 15 people that men should be allowed to use a women’s locker room, restroom or shower facility.”

The new litigation comes the day that the Justice Department set as a deadline for state officials to back down and tell the Obama administration “that the state will not comply with or implement H.B. 2,” the Public Facilities Privacy and Security Act.

After the city of Charlotte passed an ordinance requiring all public businesses to allow transgender people to use the restrooms, showers, and locker rooms of their choice, Gov. McCrory called a special session of the legislature. On March 23, lawmakers passed H.B. 2, preempting all local ordinances requiring private businesses to open their private facilities to members of the opposite sex – and leaving such policies in the business owner's hands.

The civil rights department of the Justice Department says that H.B. 2 violates the Civil Rights Act of 1964 and the 1972 Title IX law, which prohibit discrimination based on “sex.”

The Obama administration threatened to withhold federal education funds, which state sources say total $2 billion, if the state stood by its law.

Ratcheting up the pressure, the U.S. Department of Transportation (DOT) and Housing and Urban Development (HUD) announced late last week that they were examining whether H.B. 2 violated their anti-discrimination regulations. HUD proposed the reinterpretation of fair housing laws in 2011, issuing a regulation that literally redefined the term “family” to include “gender identity.”

Denying federal transportation funds could cost the state another $1 billion, according to the Raleigh News and Observer.

In response to the DOJ's letter, sent last Wednesday, Gov. Pat McCrory first appealed for additional time, saying that he deserved more than “three business days” to weigh his response. The federal government refused, he said.

“The department’s position is a baseless and blatant overreach. This is an attempt to unilaterally rewrite long-established federal civil rights laws in a manner that is wholly inconsistent with the intent of Congress and disregards decades of statutory interpretation by the courts,” the state's legal brief says, citing numerous court precedents.

The Obama administration is merely trying to force by executive power what it has not been able to achieve through legislation, the state argues in today's legal filing.

“The overwhelming weight of legal authority recognizes that transgender status is not a protected class under Title VII,” the brief says.

“Governor McCrory has already stared down big business seeking to topple North Carolina law. Now, the governor is making clear he's not going to be intimidated by President Obama's big government, either.”

The state's 10-page legal brief asks the court to uphold the longstanding legal understanding of civil rights laws, dismiss all threats of withholding billions of dollars in federal funds, and pay the state's legal fees.

Despite attempts to cast this as the federal government defying Southern bias, Gov. McCrory has continued to emphasize that the law intends to protect the bodily privacy of state residents in public places – a concern shared by its supporters nationwide.

“We are not concerned with people who identify as transgender committing sexual assault but, instead, that allowing anyone to enter a restroom of their choice permits easy access for sexual offenders,” said Concerned Women for America CEO and President Penny Nance.

“Thirty-three percent of rape or sexual assault incidents to female victims were perpetrated on school property or in a public area such as a commercial venue,” Nance said. “In addition, there are over 840,000 registered sex offenders in the U.S. and its territories who would, under these laws, be allowed in public women's restrooms.”

Perkins questioned the administration's priorities, suing a state over which restroom stall someone may use, while real crises continue to worsen at home and abroad.

“Obama's obsession with bathroom politics is hurting his credibility on the real issues facing America,” he said.

He also blasted the president's attempts at rewriting a 62-year-old iconic law. “It's time for Congress to stand up and call the DOJ and [Dept. of Education] on the carpet for their unilateral redefinition of federal law,” Perkins said. “It's time for Republicans in Congress, who have the constitutional authority as a co-equal branch of government, to bring the imperial White House under control.”

The governor said in a 1 p.m. press statement that he does not “agree with their interpretation of federal law. That is why this morning I have asked a federal court to clarify what the law actually is.”