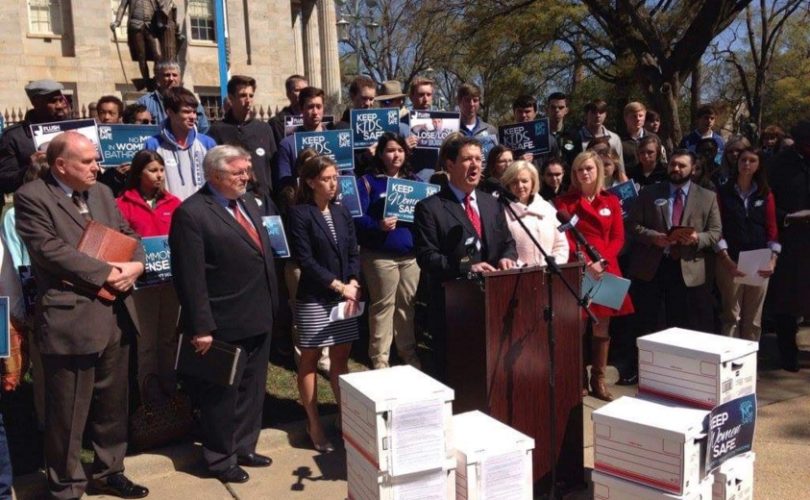 North Carolinians rally outside the legislature on March 21, 2016 urging a special session to overturn the Charlotte 'gender identity' ordinance.

RALEIGH, North Carolina, March 22, 2016 (LifeSiteNews) — North Carolina legislators are calling a special session tomorrow to address, and likely overturn, a Charlotte ordinance that allowed men to use women's restrooms in the city.

The ordinance, which will take effect on April 1, grants non-discrimination protections based on sexual orientation, gender expression, and gender identity. All places of public accommodation are affected, including restaurants and hotels, though the ordinance does not affect hiring or retention practices.

Nearly 40 people rallied on Friday to urge lawmakers to hold a special session to reverse the ordinance, and Governor Pat McCrory, a Republican, has called the ordinance “local government overreach.” House Speaker Tim Moore has said “the vast majority of my fellow colleagues in the House and I believe the ordinance passed by the Charlotte City Council poses an imminent threat to public safety.”

While LGBT activists have criticized the cost of a special session — $42,000 per day — Moore said that “the North Carolina House is unwilling to put a price tag on public safety.”

The special session was called because three-fifths of both the Senate and the House favored the session.

State Attorney General Roy Cooper, who is running for McCrory's seat, has been called upon to act by State Senator Buck Newton, who is the Republican Party's nominee for Attorney General. Cooper, a Democrat, told reporters in early March that the state legislature has higher priorities than addressing the ordinance.

Jamal Little, a spokesperson for Cooper's campaign, said Newton's addressing of the ordinance was “at best a partisan political sideshow for an attorney general candidate and worse, it’s misleading North Carolinians about how the law actually works.”

Both Cooper and a counter-protestor at last week's rally say the ordinance does not supersede existing laws related to sexual assaults, harassment, etc.

“We commend the General Assembly for listening to the voices of thousands of North Carolinians and taking the common-sense action of ensuring that no women or young girls are forced to undress, shower, or engage in other private activities in the presence of men,” said Alliance Defending Freedom Legal Counsel Kellie Fiedorek in a statement. “An ordinance that allows this to occur ignores basic physical privacy rights and is especially insensitive to those who have experienced sexual abuse and may undergo additional trauma when forced to be with a member of the opposite sex in this setting. We anticipate Gov. McCrory will keep his promise to take ‘immediate action’ and ensure that North Carolina businesses, women, and children are protected.”