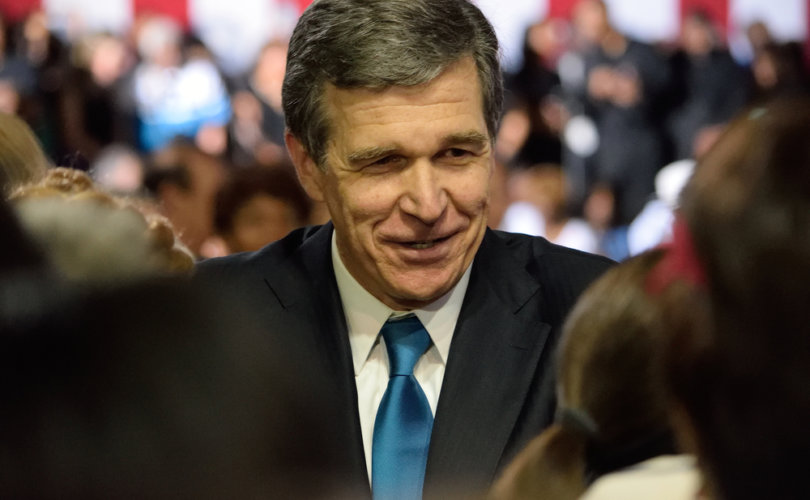 The bill repealing HB2 was set to go before the legislature on Thursday for a vote, Reuters reported, after days of lengthy negotiations.

Details were forthcoming, but the compromise measure was said to repeal language requiring “transgender” individuals to use bathrooms in accord with their biological sex.

It would still bar local municipalities, schools and others from regulating bathroom access, leaving regulation of bathrooms to the state. It also prevents cities from enacting their own bathroom and employment rules to protect certain groups until 2020.

The deal reached between GOP lawmakers and Gov. Roy Cooper came just hours before North Carolina was expected to lose its ability to host NCAA championships for years.

The college athletics association is among numerous entities to either sanction or boycott the state because of the bathroom law. It was unclear if the compromise would stave off the NCAA’s threatened boycott.

Cooper, a strong opponent of HB2, said earlier in the week that the bathroom law could ultimately cost the state almost $4 billion.

The Democrat was elected in November, narrowly beating Republican Pat McCrory, whose loss was attributed in part to his support for the law.

Cooper expressed support for the compromise bill, stating, “It's not a perfect deal, but it repeals House Bill 2 and begins to repair our reputation.”

It reversed a Charlotte city ordinance requiring all public businesses to allow “transgender” people to use the restrooms, showers, and locker rooms of their choice.

The law limited municipalities’ ability to enact laws with special protection based upon “gender identity” and mandated that public educational and government organizations have restrooms and locker rooms designated by biological sex.

Republican leaders from both chambers announced the deal at an informal press conference late Wednesday.

“Compromise requires give and take from all sides, and we are pleased this proposal fully protects bathroom safety and privacy,” Senate leader Phil Berger and House of Representatives Speaker Tim Moore said in a statement.

McCrory tweeted late Wednesday urging the state’s lawmakers and Cooper “to finally stick with this deal that still respects privacy and let Supreme Court resolve issue for our nation.”

LGBT activists and their supporters expressed unhappiness with the proposed compromise.

“This is a dirty deal,” said Chad Griffin, president of the Human Rights Campaign (HRC). Griffin promised to keep fighting North Carolina in court and publicly if the new law passes and gets Cooper’s signature.

The group’s senior legislative attorney said the compromise would leave LGBT people without a statewide anti-discrimination ordinance and likewise no ability to seek such protections from local government for years.

“What that means for the LGBT community is that we continue to be boxed out of nondiscrimination protections,” Cathryn Oakley said in a New York Times report.

Equality North Carolina executive director Chris Sgro said the measure “keeps North Carolina as the only state in the country obsessed with where ‘trans’ people use the restroom through law.”