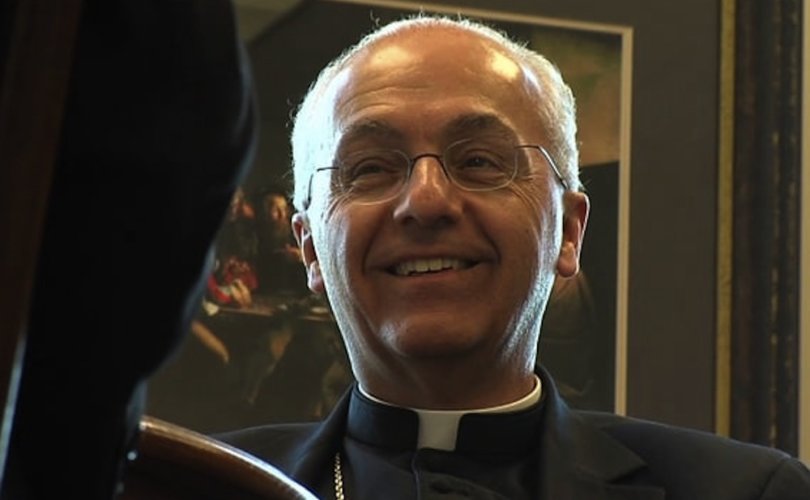 BISMARCK, North Dakota, October 14, 2016 (LifeSiteNews) – The Catholic bishop of Bismarck has taken to Twitter and his diocesan website to shepherd Catholics with clear and concise guidance on voting according to Catholic principles.

Bishop David Kagan released a message with guidance on Catholic voting last week, encouraging Catholics to exercise their privilege and duty as citizens to vote. He cited the Catechism of the Catholic Church and explained, “A properly formed Catholic conscience does not contradict the defined truths of our Catholic Faith in matters of faith and morals.”

“The Catholic Church’s teachings are the means for us to properly form our consciences so that we seek always what is objectively true and good,” Bishop Kagan said in the October 7 message.

The bishop goes on to explain how respect for the human person, shown through the fundamental tenet of protection and defense of their life, is at the heart of all Catholic moral and social teaching and must govern every law and action.

“For the reason,” he said, “there are some actions that are never acceptable and should not be made so by law. They include abortion, euthanasia, embryonic stem cell research, and not recognizing the unique and special role of marriage as the union of one man and one woman.”

“All the other social, economic, and political issues only gain importance from the fundamental issue of the respect for the individual person and the inviolability of each person’s life and God-given dignity,” Bishop Kagan said. “If there is no respect for the life and dignity of each person from conception to natural death, then every other moral and social evil can be justified.”

Bishop Kagan wrote a similar message in 2012, drawing the ire of a Catholic Democratic state senator who called on him to withdraw the letter, along with that of the dissenting National Catholic Reporter, which referred to the bishop’s teaching on conscience as “erroneous” and said “the conscience of a good and thoughtful Catholic might or might not square with official teaching.”

Liberal activist group MoveOn.org produced a petition in opposition to the bishop’s letter as well, referring to it as “your shameful pastoral letter.”

In response to pushback, the Bismarck diocese issued material explaining the bishop’s responsibility to teach the faith as a successor of the Apostles and that the letter simply restates Catholic teaching on forming one’s conscience

“As a bishop, Bishop Kagan is concerned about the souls of the Catholic faithful,” it states in part. “For the Christian, no act can be separate from our faith life, including voting. Unfortunately, too many people separate their political life from their faith life.”

“I will not tell you for whom you should vote nor will I tell you for whom I intend to vote,” Bishop Kagan states in this year’s message, as he did in his previous letter.  “However, I ask you to vote as a Catholic citizen who has properly formed his or her conscience.”

The bishop’s clarity is even more evident in his recent Twitter posts, which remark on the scandal of those Catholics who contravene Church teaching in public life through their support for abortion.

“Pro-abortion Catholics are saying that some human beings do not have an inviolable right to life like they were given,” he tweeted. “Stupid! Not Catholic.”

Pro-abortion Catholics are saying that some human beings do not have an inviolable right to life like they were given. Stupid! Not Catholic

“The hypocrisy of the Pharisees is mirrored by so-called catholic politicians who claim to be good Catholics and vote for abortion,” Bishop Kagan tweeted on Tuesday.

The hypocrisy of the Pharisees is mirrored by so-called catholic politicians who claim to be good catholics and vote for abortion.

On Monday, his post said, “The unspeakable crime of abortion is motivated by an equally evil artificial contraceptive mentality. 2 intrinsic evils lead to moral decay.” And last week he tweeted, “This is Respect Life month. To murder an innocent child in the womb or as it is being born is to curse God Who created this child and us.”

The unspeakable crime of abortion is motivated by an equally evil artificial contraceptive mentality. 2 intrinsic evils lead to moral decay.

Bishop Kagan also implored his Twitter followers to pray the Rosary for the Lord to show the nation mercy.

The North Dakota bishop is among those bishops who support the Credo of Christ’s faithful families released in the last few months to affirm key Church teachings on marriage and human life. He went beyond any other U.S. prelate last year in response to the Boy Scouts of America conceding to homosexual pressure and allowing openly gay leaders, formally disassociating all diocesan institutions with the Boy Scouts.

“In conscience as the Chief Shepherd of the Diocese of Bismarck, I cannot permit our Catholic institutions to accept and participate directly or indirectly in any organization, which has policies and methods, which contradict the authoritative moral teachings of the Catholic Church,” he said at the time.

Bishop Kagan responded to last year’s Supreme Court Obergefell decision imposing legalized homosexual “marriage” across the U.S. by quoting St. John Paul II in stating, “The truth is not always the same as the majority decision.”