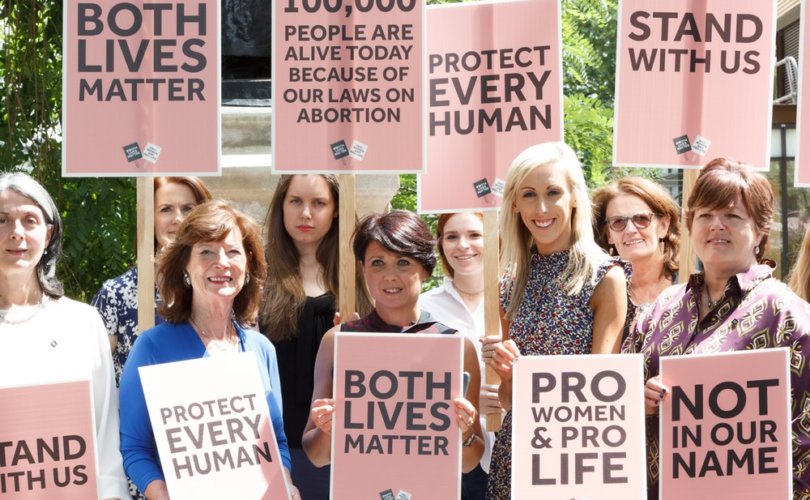 LONDON, July 20, 2018 (LifeSiteNews) – This week saw an unprecedented event taking place in the halls of the Palace of Westminster. It was there that a group of elected representatives from Northern Ireland assembled. Unlike other such gatherings, these politicians, and those accompanying them, came from every political persuasion in Northern Ireland.

Unionist, Republican, and Nationalist were united as never before at the Mother of Parliaments. Politically they may be poles apart: whether it be on the Constitutional status of Northern Ireland, or in terms of economic policy, or in regard to Brexit – but on the subject of the unborn there was complete agreement. As pro-lifers, they spoke with one voice.

What is more, and crucially, this was a delegation of women: all living in Northern Ireland, all politically engaged, all saying that recent calls from British MPs to legalize abortion in Northern Ireland did not accord with the wishes of the vast majority of women who actually live in that part of the United Kingdom.

Since the Irish Republic’s referendum on abortion, some Westminster MPs have been campaigning for more liberal abortion laws in Northern Ireland. A few Westminster MPs have called for a free vote in the House of Commons on pro-abortion Labour MP Stella Creasy’s proposed amendment to the Domestic Abuse Bill. This would see new abortion laws imposed on Northern Ireland. Such laws would be even more liberal than the current law in Great Britain. This call comes even though abortion has been legislatively a devolved responsibility for the Northern Ireland Assembly since 2009.

Leading Conservatives, including the party’s Deputy Chair James Cleverly and the leader of the Scottish Conservatives, Ruth Davidson, have warned against going over the heads of the Northern Ireland assembly, as has Scottish National Party MP Deirdre Brock. Polling by non-partisan pro-life group and Northern Ireland-based Both Lives Matter shows a clear majority – 72 percent – of Westminster’s Conservative MPs are against devolution being undermined by the imposition of liberal abortion laws on Northern Ireland.

“It’s vital that MPs hear from women who live and work in Northern Ireland and who represent other women across the Province,” Dawn McAvoy, co-founder of Both Lives Matter, said at the Westminster gathering. “There are a lot of myths about abortion law in Northern Ireland. It’s important for the British public to know that women in Northern Ireland do have access to safe and legal abortion, [if] in carefully limited circumstances.”

McAvoy said that there had been “a lot of noise about the ‘need’ for new abortion law in Northern Ireland.” She was clear that this was being driven by pro-abortion campaigners, mainly based in Great Britain, who are trying, for their own ends, to open up unlimited access to abortion.

McAvoy added: “We represent some of the many Northern Irish women who reject this. We would urge [Westminster] MPs to respect the people of Northern Ireland and our elected representatives. Our current law provides proper protection for both the mother and the unborn baby and we’ve found that many women have no desire for that law to be changed.”

Carla Lockhart, a DUP NI Assembly Member for Upper Bann, told those assembled at Westminster, “I have constituents who are deeply concerned at the prospect of abortion on demand being foisted on Northern Ireland. We will be urging members of both Houses to respect the sincere and deeply held views of many in Northern Ireland about abortion.”

“Abortion was fully devolved to the Assembly in 2009,” Lockhart pointed out. “Any move to liberalize our abortion laws through Westminster would be unreasonable and disrespectful to the democratic process in Northern Ireland. Such significant change would undermine the principle of devolution.”

Anne Brolly, a former Sinn Fein Mayor who left the party over its anti-life policies, said, “The devolved administration in the North of Ireland was hard won and is currently very fragile. If MPs are serious about respecting it then they will not legislate above the heads of our elected representatives.”

Brolly noted the variety of political opinions present among those who had travelled from Northern Ireland: “All across the North there are many women of different political persuasions who do not want this sort of imposition and I would strongly urge MPs to listen to the views expressed today.”

In Westminster’s historic Committee Room 10, Westminster’s Lords and MPs heard an unequivocal call from the women of Northern Ireland – Unionist, Republican, and Nationalist – to respect the right of Northern Ireland to determine its own laws on abortion. It was also, in submission after submission, an impressive call for those elected representatives to respect life in the womb.