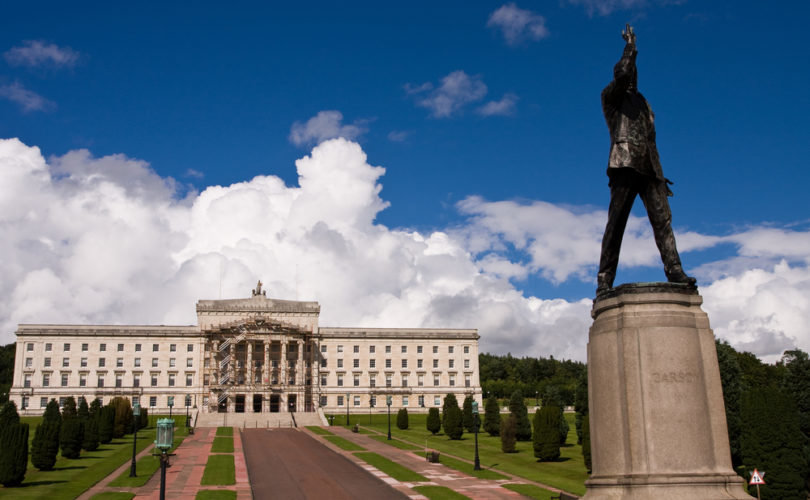 BELFAST, Northern Ireland, June 19, 2015 (LifeSiteNews) – Northern Ireland’s attorney general stoutly defended the lives of unborn children in court this week against the claims of unelected human rights groups that laws “forcing” women to fly to England for abortions are a form of torture.

Though the half-hour flight costs as little as US $36, Sarah Ewart nonetheless told the Northern Ireland High Court the trip to get her 20-week old unborn child aborted was “a living nightmare.”

But Northern Ireland Attorney General John Larkin, whose job includes the statutory role of “Guardian of the Rule of Law,” took three hours in court to defend existing Northern Irish laws that treat unborn children as any other children, and their killing by abortion as homicide.

“The Attorney General made it clear that no legally binding treaty or international declaration could force a country to legalize abortion,” Bernadette Smyth, the head of the Precious Life pro-life group, told LifeSiteNews.

“He also said that democracy should prevail, that the court should leave this matter to the legislators to decide,” she added. In 2012 the Northern Irish Parliament rejected the same proposed expansion of abortion to include cases of rape, incest, and fetal abnormalities.

Ewart is fronting the bid by the Northern Ireland Human Rights Commission and Amnesty International to get Northern Ireland’s existing laws ruled in violation of the United Nations and European Conventions on Torture and Inhuman or Degrading  Treatment or Punishment, and therefore null and void.

Ewart has maintained a high profile that began in 2013 when the BBC accompanied her on her trip to an English abortion facility, where, according to Smyth, “she must have had her baby cut apart.” However, no media reports, nor documentation from her institution makes reference to the medical outcome of her unhappy voyage.

“I am an ordinary woman,” she told the High Court, “who suffered a very personal family tragedy, which the law in Northern Ireland turned into a living nightmare. I was told that my baby was likely to die before being born or shortly afterwards. All I kept thinking was, ‘Our baby has no brain, she cannot live.’”

Smyth, however, said the Northern Ireland health system provides good support for women with children with abnormalities such as, in Ewart’s case, encephalitis, though it could be improved.

“We at Precious Life also offer support through the pregnancy and afterwards too,” she said. Babies in these cases live for a few hours or a few days. “We give the mother a chance to hold her baby,” she said.

The NIHCRC and Amnesty International are ostensibly seeking a ruling that only throws the law out in cases of rape, incest, or abnormalities (abortions are already permitted to save the life of the mother). But Smyth told LifeSiteNews, “They want to get rid of the law altogether, just as they have done elsewhere in Europe. The unborn child has more protection in Northern Ireland than almost anywhere else in the world. They want that to end.”

Precious Life, though it was not permitted to make an oral submission, did present written argument explaining how the United Nations Declaration on the Rights of the Child, recognizes the rights of unborn children to the same care and protection as children after birth.

The group also argues that the change the NIHRC and Amnesty International seek is “discriminatory against a whole class of people—children with disabilities and those conceived by incest or rape,” said Mrs. Smyth. “They not only seek to discriminate against them. They seek to destroy them, to kill them all in the womb.”

The judge said Wednesday the decision will come in the fall. If it goes against the unborn, Smyth promises to appeal legally and continue the fight in every way possible. Media reports estimate the number of women who make the trip to England for abortions at 2,000.