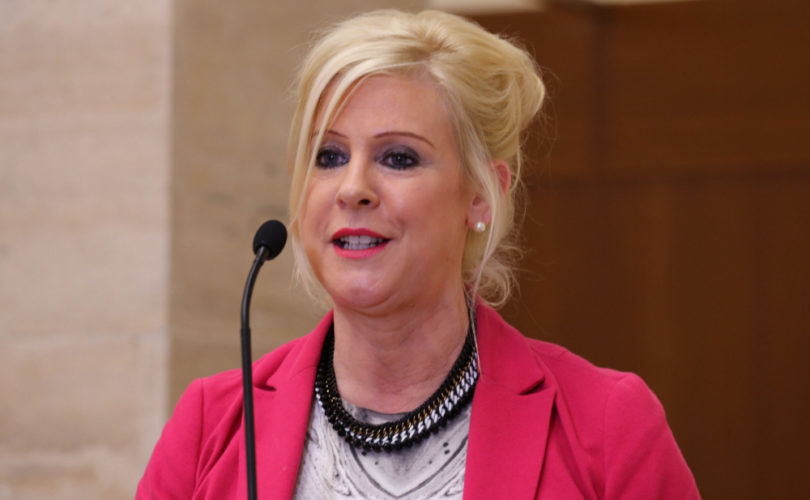 A prominent pro-life activist in one of the hot zones of worldwide abortion war has been convicted of harassment and may face jail time.

For two years, Bernadette Smyth has been among a group of pro-life sidewalk demonstrators, praying, handing out leaflets and talking to passers-by outside the Marie Stopes abortion facility in Belfast. Today a judge told her that she was guilty of “harassment” against the facility’s operator, the former politician Dawn Purvis.

Smyth is the head of Northern Ireland’s leading pro-life group Precious Life, and is therefore one of the primary targets for those attempting to force the legalization of abortion in the province. Purvis brought a charge of harassment against Smyth, claiming that in their interactions outside the Belfast facility she had been left feeling “very frightened.”

In his ruling, Judge Chris Holmes said the defence launched by Smyth was run “no-holds barred, in a vicious and malicious fashion,” and also accused Smyth of “slandering” a Belfast police officer. “Throughout this case there’s been a concerted attack on anyone seen as getting in the way of Mrs. Smyth.”

He told Smyth that in addition to a possible jail sentence or community service, she will be required to pay compensation and could also face a restraining order keeping her away from the Marie Stopes facility. Sentencing is scheduled for September 9.

“What we have here is a lady who is implacably opposed to what is going on inside that building and the work of Dawn Purvis,” Holmes said, in quotes reported by BBC.

Abortion remains a crime in Northern Ireland’s law and the presence of the Marie Stopes abortion facility remains a legal gray area, with MLAs working to close it.

Holmes, however, made no reference to these facts in his ruling, adding, “I want to make it absolutely clear that I do not feel it’s appropriate for anyone to be stopped outside this clinic in any form, shape or fashion and questioned either to their identity, why they are going in there and being forced to involve themselves in conversation at times when they are almost certainly going to be stressed and very possibly distressed.”

Dawn Purvis is a former member of Northern Ireland’s legislative assembly and was previously the leader of the Progressive Unionist Party. She is a longtime campaigner on the full range of left-liberal causes, including the cultural and legal normalizing of homosexuality and legalized euthanasia, and has been a key figure in the appearance of the Marie Stopes facility. She and the other organizers of the shopfront facility claim to be acting within the law of Northern Ireland, where abortion remains a criminal offence, saying they only provide “medical” abortion drugs on women who are less than nine weeks pregnant.

A statement today from Purvis also reveals the highly politicized nature of the case. “I fully respect people’s right to peaceful protest, but it is totally unacceptable to intimidate women accessing a legal health service or the staff that provide their care,” she said.

The right of pro-life advocates and sidewalk counselors to speak against abortion to people outside abortion facilities has long been one of the key issues of contention in suits and legal cases against them in North America and Britain. Purvis’ statement echoes the rhetoric regularly issued by another of Britain’s abortion industry giants, the British Pregnancy Advisory Service (BPAS), who have also tried to use legal means to stop demonstrators.

Marie Stopes, one of the largest abortion organizations in the world with revenue in excess of £145 million year, has fought for years to gain a foothold in Ireland and, with International Planned Parenthood, has been a key player in the ongoing battle to legalize abortion. They opened their Belfast facility in open defiance of the law in October 2012, and Smyth has been in the forefront of an ongoing legal and political battle to see it closed since that day. In a media release, Smyth’s solicitors have said they will appeal, and that Smyth and Precious Life have been “assaulted, insulted and falsely accused for simply defending the rights of mothers and their unborn children to choose life.”

Solicitor Aiden Carlin said, “The pro-life movement worldwide will be disappointed at this decision.” He called the court case against the very outspoken and prominent Smyth a political ploy “to deter Precious Life and to curtail their rights under Articles 9, 10 and 11 of the European Convention. The pro-life movement and their legal representatives will not been silenced.”

Carlin added that Smyth had never used “bad language” or made “any attempt to make contact with Dawn Purvis,” and that it was Purvis who had “approached Bernadette Smyth’s personal space on both occasions” mentioned in the case.

“Instead, the Court heard Bernadette Smyth’s conduct was orderly, routine, peaceful, non-intrusive, non-obstructive, dignified and respectful of others including Dawn Purvis with whom she publicly disagrees on abortion.”

He said that Smyth’s leadership of Precious Life “has been the subject of high praise by senior police” and has “never lead to public disorder.”

“Those who stand and pray outside it and other abortion facilities throughout the United Kingdom and Ireland are as much a part of society as the rest. Bernadette Smyth is a very highly respected Christian who has earned public recognition for her tireless work. She has campaigned worldwide on behalf of the unborn for over 17 years,” Carlin said.