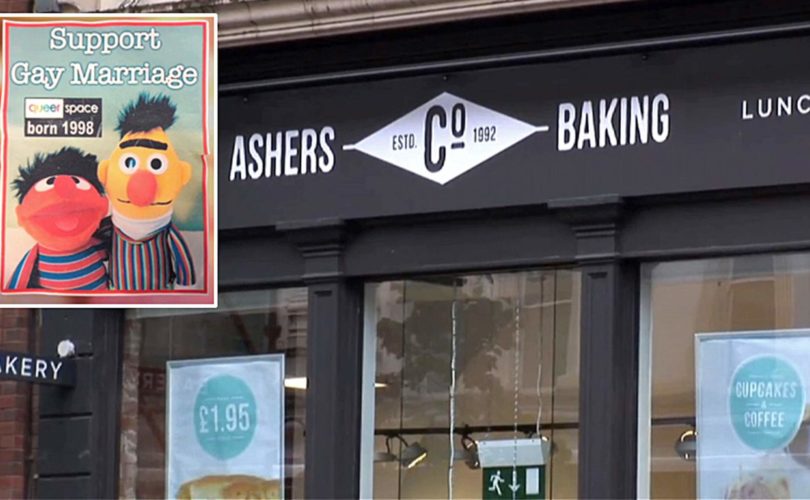 BELFAST, Northern Ireland, February 4, 2016 (LifeSiteNews) – The Northern Ireland attorney general has intervened in the Ashers Bakery case, which saw a Christian family enterprise fined 500 pounds for refusing to bake a cake bearing the words “Support Gay Marriage” by questioning whether the law they broke is itself in violation of Northern Ireland's constitution.

The intervention came at the beginning of the hearing into the McArthurs' appeal, which the lord chief justice of Northern Ireland, Sir Declan Morgan, grudgingly delayed until May as a result.

The A.G. is asking the court whether Northern Ireland's law banning workplace discrimination “impedes or places a burden on certain forms of political or religious expression given the prohibition of discrimination on the grounds of religious belief or political opinion contained in section 24 (1) (c) and (d) of the Northern Ireland Act 1998,” the latter being a constitutional document.

Simon Calvert, a spokesman for the Christian Institute, which is providing legal counsel for the McArthurs, said the attorney general's arguments had nothing to do with their case. “We were ready to go today, but we respect the legal process, and we will be back again on 9 May.”

The attorney general's concerns emerged only two days after British human rights and homosexual rights activist Peter Tatchell announced in a Guardian opinion piece that he had changed his mind on the Ashers case and now believed that the McArthurs should win their appeal in the name of  freedom of religion and thought.

“Much as I wish to defend the gay community, I also want to defend freedom of conscience, expression and religion,” wrote Tatchell. “In my view, it is an infringement of freedom to require businesses to aid the promotion of ideas to which they conscientiously object. Discrimination against people should be unlawful, but not against ideas.”

If the Ashers lost, Tatchell worried later on the BBC, “Jewish printers could be required to print books by a Holocaust denier” or Muslims to print “cartoons of Mohammed.”

Showing a solid grasp of Northern Ireland's embattled history of inter-religious strife, Tatchell also told Guardian readers, “Northern Ireland's laws against discrimination … were designed to heal the sectarian divide by preventing the denial of jobs, housing and services to people because of their politics. There was never an intention [to make people] promote political ideas with which they disagreed.”

As Tatchell explained later to the BBC, he would still condemn Ashers Bakery if its staff had refused to bake a cake for the plaintiff in the case, Gareth Lee, simply because he was homosexual. But in fact their objection was to the message they were asked to put on the cake along with two Sesame Street characters, Bert and Ernie, locked in a homosexual embrace.

Tatchell may have been trying to mitigate any backlash from the homosexual lobby when he then added that the McArthur family's religious beliefs “are, to my mind, theologically unsound[.] … They claim to be Christians, yet Jesus never once condemned homosexuality, and discrimination is not a Christian value.”

Founder of the group OutRage! and head of the Peter Tatchell Foundation, a human rights group, the Australian-born activist has stirred controversy by calling for sexual liberation of five-year-olds and by denying the existence of the so-called “gay gene.”