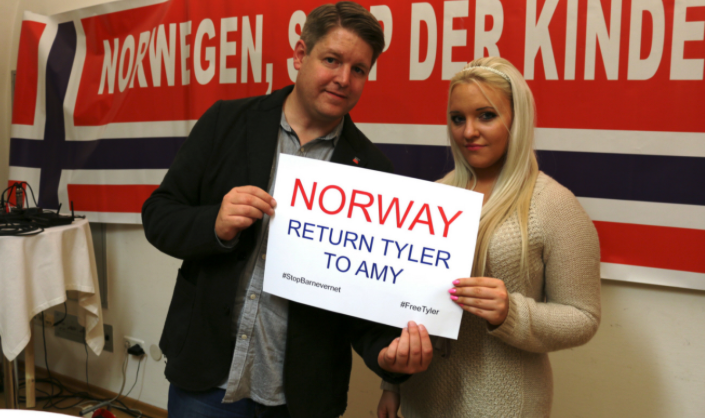 February 26, 2020 (LifeSiteNews) — Amy Jacobsen is an American mother whose son Tyler was taken from her by the Norwegian government in 2013 when he was just 19 months old. According to authorities, the reason Jacobsen, who was living in Norway at the time, lost custody of her son is that he was underweight and malnourished. Child Protective Services had no choice but to intervene.

Jacobsen’s nightmare scenario was discussed in detail on the Jonathon Van Maren Show this week. Norwegian pro-family activist Björn Korf, a Christian radio broadcaster who lives in Austria, was the guest. Korf helps run Step Up 4 Children’s Rights, an organization dedicated to stopping what is essentially state-sponsored kidnapping going on in Europe.

“She’s an American, but her father originated from Norway,” Korf told Van Maren. “When she was thirteen years old, the family moved back to Norway. And later on she had a boyfriend, and she had a baby boy named Tyler.”

Amy was on a holiday in America with Tyler, Korf continued. The day after she got back in July 2013, the police and Child Protective Services knocked at the door to take Tyler to the doctor’s office. But instead of taking the child to the local doctor, who had Tyler’s medical records, they took him to one 45 miles away. The doctor there found Tyler to be a halfpound underweight and with a slight vitamin B12 deficiency. That was enough to take Tyler from his mother.

“They’re not allowed to know where Tyler is now,” Korf said. “In fact, they’ve changed his name twice to make sure that [his parents] don’t find his whereabouts.”

Korf told Van Maren that he’s reached out to the U.S. embassy in Oslo to resolve the issue but that embassy staffers aren’t helpful.

“They would only say to Amy that she needs to submit to the Norwegian rules, and to the Norwegian law. But I would turn around and say, ‘Hang on a second…you have the U.N. Convention on the Rights of the Child. The identity of an American citizen here is completely being erased. The child is seized to hide the whereabouts.’”

Currently, a CitizenGO petition calling on the Norwegian government to free Tyler so he can live with his mom has garnered more than 53,000 signatures. Add your name by clicking here.

Korf said Jacobsen’s last recourse is that the European Court of Human Rights will return her son. Presently, the court has approximately 30 cases from Norway similar to Tyler’s that are pending. Norway has already been convicted by the Court in five different child welfare cases of violating human rights.

The seemingly obvious abuse of power displayed by the Norwegian Child Welfare Services is sadly all too common throughout Northern Europe. Korf told Van Maren that not only Norway, but Sweden, Finland, and other Scandinavian countries are practically stealing children from their parents, often for frivolous reasons.

“Child removals in Norway … have gone up by 70 percent over the last years,” he said. “And you have like four to five children that are being taken by the child welfare services each day.”

Very few secular news organizations have covered Amy’s and Tyler’s story. Along with LifeSiteNews, only the Christian Post, The Stream, and Christian Broadcast Network have reported on it.