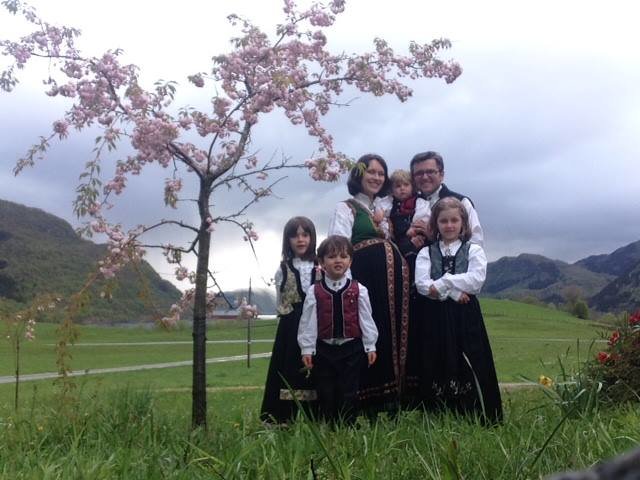 The London-based Christian Today reports that the agency, or Barnevernet, seized the four oldest Bodnariu children November 16, and three-month-old Ezekiel the next day.

On the third day, it notified Ruth that the girls had been sent to a separate foster home from the boys and claimed that the children were not missing their parents.

According to Christian Today, a November 27 Barnevernet hearing ruled that the Bodnariu children would not be returned to their parents. The parents could see their baby son twice a week for two hours, as well as the two older boys, Matthew, 5, and John, 2. It refused them any access to their daughters, Eliana, 9, and Naomi, 7.

The Romanian-born Marius, an IT engineer, moved about 10 years ago with Ruth to her hometown in Norway, the west coast community of Naustdal, north of Bergen.

Daniel Bodnariu, brother of Marius, has been posting updates on the fate of the Bodnariu children, and is the primary source of information for the story, which is also being disseminated by Christian Ionescu, pastor of a Chicago-based Romanian Pentecostal Church.

Ionescu launched an online petition on behalf of the beleaguered couple. It currently has 31,924 signatures, and states the Bodnarius have been charged with “Christian radicalism and indoctrination.” Ionescu did not get back to LifeSiteNews by deadline.

According to Bodnariu’s December 3 communique, the principal of the school attended by Eliana and Naomi reported to Barnevernet that the girls had talked about being disciplined, that the family was “very Christian.” She also reported that, in Daniel’s words, “the grandmother has a strong faith that God punishes sin, which, in her opinion, creates a disability in children” and that the parents needed “help” in raising their children.

Barnevernet agents thereupon came to the school and questioned the girls, who described that they would not admit to doing some things for fear their parents would punish them by pulling their ears, or slapping them on the buttocks, although they stated that they were not afraid of their parents, Bodnariu wrote.

He wrote that the girls told Barnevernet workers that their father shook the baby “as a rag,” a statement Marius vigorously denies.

“What I would like to highlight is that you can easily manipulate a child to say something that is not true,” Bodnariu pointed out. “The law in Norway gives almost total credibility to the child and none to the parent.”

Following the girls’ remarks, the children were seized and the baby, according to Bodnariu, was subjected to a CT scan and X-ray in a vain attempt to find evidence of physical abuse.

When the principal realized the children had been removed from their home, she refused to cooperate further with Barnevernet, he reported.

Nevertheless, the children remain separated from their parents at this time.

Indeed, the Barnevernet has become notorious for its readiness to seize children from their homes, particularly when one or both of the parents are immigrants, reported Christian Today, pointing out that there are an estimated 3,000 children of non-Norwegian parents in Norwegian state custody.

Forty percent of the children in custody are from immigrant backgrounds, according to Norway’s NewsinEnglish.

The agency has been severely criticized by India, Sri Lanka, and eastern European countries such as Russia, Latvia, Lithuania, Poland, and Russia for its actions, NewsinEnglish reports, as well as for placing children from immigrant families in Norwegian-speaking homes.

One of the frequent grounds for the Barnevernet’s seizing children is that the parents are physically hitting them, which is illegal in Norway, it notes.

According to Christian Today, the family is considering further legal action.

Meanwhile, those objecting to the treatment of the Bodnariu children are urged to email the Norwegian government (for more information, go here).